The 1 Kings story of Elijah and Elisha is where Tony W. Cartledge, Ph.D., began his commissioning ceremony service for Campbell University Divinity School on Tuesday morning. A little confusing for anyone unfamiliar with the Old Testament or southern accents, but Cartledge knew his audience and knew the pair of prophets was the best example for those answering the call to ministry and enrolling in this year’s class.

The eleventh book of the Bible tells the story of how Elijah the prophet unceremoniously announces the Lord’s calling of Elisha to leave his parents and follow Elijah to serve the Lord. At times it is difficult with no instructions, but Elisha perseveres and remains faithful to his calling and his mentor until the end of Elijah’s life. 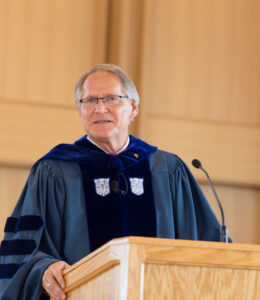 In a style very much his own, Cartledge found a way to thread Elijah and Elisha’s story with the many things new students worry about – new beginnings, challenges, the speed of which one answer’s a divine calling – into one 30 minute sermon.

Cartledge also recalled his own transition into the ministry that involved taking over the pulpit of a sickly preacher. He noted that sometimes divine calls are inconvenient, unwanted or confusing, but one certain truth is God’s call is a growing, evolving thing.

The new members of the Campbell University Divinity School are living proof of that truth. From former teachers to full-time moms, the group can attest to God’s evolving call throughout their life and their hope for what lies ahead. Read more about their stories below.

Answering the call to ministry is a unique experience. For some, it involves finding ways to serve the church and its members. For others, it brings years of prayer and planning to make a career change. For Jairod Barnes, it involved a family church and his grandfather’s legacy.

In April 2015, WRAL News recognized him as Teacher of the Week. News anchor Bill Leslie introduced the segment with a cheerful “Are you in a career that you want to be in for the rest of your life? Well [Jairod Barnes] can answer that with a resounding YES.”

Shortly after that segment aired, Barnes lost his job due to financial cuts within the school system.

Looking back, he recalls that experience as a shift, like God redirected him. He was able to stay on at the middle school as a teacher assistant and focused more on his role as minister of music at the church his grandfather led, The Tree of Life Full Gospel Church in Louisburg, North Carolina.

Through that experience, he felt compelled to continue his education through divinity school.

“I felt that I had a call to pastor and love people,” he said about that first pull from the ministry.

He applied and subsequently enrolled in Campbell’s Master of Divinity program for the fall semester of 2015. Then his grandfather passed away that September.

His death resulted in Barnes withdrawing from divinity school before the semester officially began to help with administrative duties at his family’s church and to personally grieve the loss of his mentor, pastor and friend.

Three months after the funeral, Barnes assumed the pastoral role at the church his grandfather founded in 1982. In the two years since he has been full speed ahead focusing on elevating the church’s ministry and inspiring members to find new ways to serve God. But this summer, something felt off.

He said he felt hypocritical encouraging members of his church to step out on faith, but not actually doing it himself because he wasn’t making plans to return to school.

“I was allowing the blessings of God to get in the way of me being obedient to God,” he said.

Encouraging the members of his congregation to step out on faith and watching those experiences drastically change lives in his community ultimately inspired him to reexamine his calling and re-enroll in the Master of Divinity program at Campbell.

“This is a big step not just for me, but for my family and my congregation. What I’m learning now is going to help shape the future of our church, but I feel that I am now who God called me to be.”

And the support from his congregation? Overwhelming.

“People won’t help you do nothing, but they will help you do something. That’s what I’m learning.”

Emily Patton grew up in the heart of North Carolina, remained active in her church and declared elementary education as her major when she enrolled at the University of North Carolina at Chapel Hill.

Her life was right on track, making progress towards her goal of becoming a teacher when Kristen Muse (’03 Div) called her during her sophomore year.

Muse, then a children’s minister for Hayes Barton, asked her if she remembered a conversation they had at church when Patton was in middle school.

“I remember her asking what I thought I might want to be when I grew up, and for the first time, I blurted out that I wanted to be a minister.”

That phone call changed her life. Muse asked her to join the staff at Hayes Barton the following summer as an intern because she didn’t want Patton to push away the call to ministry if that’s what that conversation in sixth grade really meant.

Her future became a lot clearer after that summer internship, but things didn’t necessarily become easier.

She found herself back in Chapel Hill, attending classes in her education curriculum and continuing to tell people she was going to be a teacher after graduation.

“It took me awhile to accept and claim my calling fully, and really to just say it out loud. But I realized that I had to be confident in my calling before anyone else could be.

“If you had asked me [in sixth grade] what being a minister involved, I don’t think I could have verbalized it, but I was fortunate to grow up in a church that encouraged my faith and didn’t try to limit me because I was a girl.”

She completed her undergraduate degree at UNC while continuing to serve in multiple capacities as an intern at Hayes Barton. Now, she embarks on her divinity school journey with the mind of a teacher and the heart of someone called to serve God.

Jill Knight grew up across the North Carolina-Virginia state line in the town of Halifax, Virginia. Throughout her childhood and teenage years, she was heavily involved with the music ministry at her church and eventually took over the teaching responsibilities for the children’s choir.

This opened her heart to a passion for music and teaching others. After high school, she headed to Wake Forest University to study English and Music, where she settled on majoring in English with a focus on Education.

“When I graduated from high school I felt that I was called into music ministry and planned to attend seminary after getting my undergraduate degrees,” she said. “However, for various reasons, I got off track with those plans.”

After six years of working in an unfulfilling career, her family grew and she decided to become a full-time mom while continuing to serve in the music and children’s ministries at her church.

She began looking into theological education and found Campbell University Divinity School through a church leader. This fall, she begins her journey she felt called to take since she was a teenager.