Campbell University celebrated the generous donors who made its ambitious five-year, $105 million Campbell Leads campaign a reality with a black tie Gala Friday night in a giant tent under the stars in the Academic Circle.

The event did more than honor those who give and the fruits of their generosity — it served as the first large public showcase of the Oscar N. Harris Student Union after two years of a pandemic that limited its potential. Roughly 250 people — among them some of the University’s most ardent supporters — enjoyed live music, a catered meal, a showcase of student achievements and testimonials from both donors and those who have benefited from scholarships made possible by the campaign. 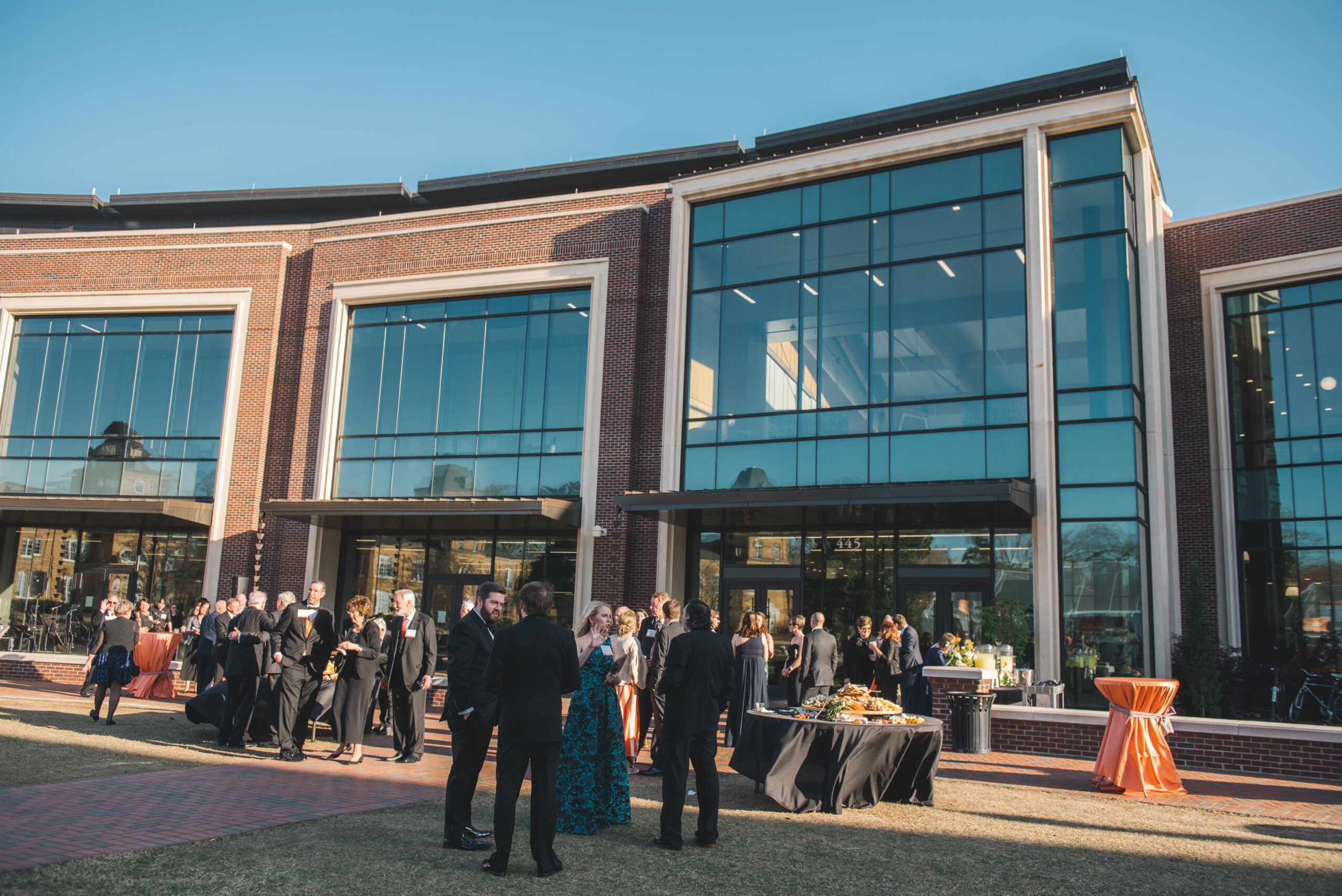 The Campbell Leads campaign was launched in 2016 as a fundraising effort to benefit student scholarships, the Fund for Campbell and the campus-transforming student union, which opened its doors in 2020 in the beginning months of the pandemic.

Campbell Leads was among the first initiatives set forth by President J. Bradley Creed when he took office on July 1, 2015. Launched one year later, the campaign hit its original goal of $75 million November 2020, and that mark was extended to $100 million in 2021. More than 61,000 gifts were made from Campbell University alumni and friends — 25 gifts exceeded $1 million, and nearly 500 major gifts of $25,000 or more were made.

“I’m so glad I have lived to see the change at this University, and the most amazing thing I’ve witnessed is you — the ones who are responsible for all of this,” said Bob Barker (’64), longtime Campbell supporter and advocate.

Originally scheduled for February but postponed to April 1 because of rising COVID-19 cases at the time, Friday’s Gala was an outdoor event — with picture-perfect spring weather — but the student union served as the entryway to the festivities for those in attendance. The 115,000-square-foot facility is home to a large-scale banquet hall, new campus dining options, offices and meeting areas for students and student-led groups, a 200-seat movie theater, a two-story fitness center and a new Campbell merchandise and gift shop.

And it provided an impressive backdrop for Gala attendees, some of whom hadn’t been on campus since its opening. Ben Thompson (’76, ’79 Law), chairman of the Board of Trustees, offered a long overdue tribute to the man for whom the building was named — the late Oscar Harris, distinguished Campbell alumnus and former mayor of nearby Dunn, North Carolina. 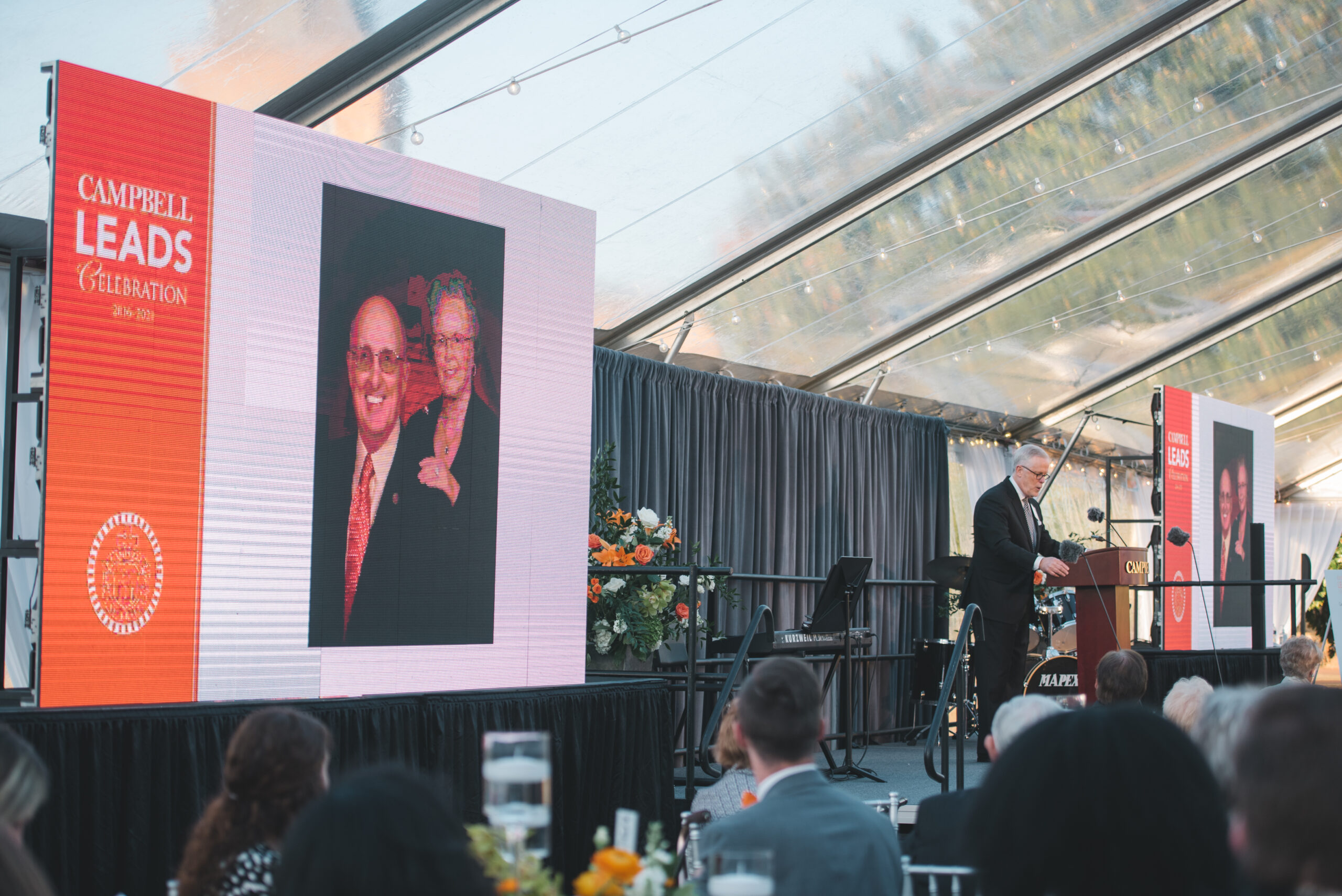 Harris was a 1965 graduate of Campbell who served two terms on the North Carolina State Senate and five terms as mayor of a city twice named an All-American City. He was founder and president of his own accounting firm and a tireless supporter of his alma mater, serving multiple terms as a trustee and serving on numerous committees and boards. He was chairman of the committee that raised funds for the Jerry M. Wallace School of Osteopathic Medicine, which became North Carolina’s first new medical school in 35 years in 2013.

Harris died on Jan. 28, 2020, before the public announcement of his naming gift for the student union.

“In business, Oscar was quite simply the man you needed to have on your side — he was a tireless worker and an effective advocate for any cause he supported,” Thompson said.

Creed echoed the kind words for Harris, recalling his first meeting with him and the day he heard the news of his untimely death.

“What a legacy he has left all of us,” Creed said. “Oscar embodies the spirit of not just the student union, but of this University. He, like many of our generous donors, gave out of a sense of having been blessed. You can’t give unless you first receive, and those of you who have received know that it’s not because you pulled yourself up by your bootstraps — though you are to be noted for your ingenuity, your creativity and your hard work. But it’s because God blessed you. So if we write the story of this campaign, which will go down in the annals of Campbell University history, it will be a real short story with two powerful words.” 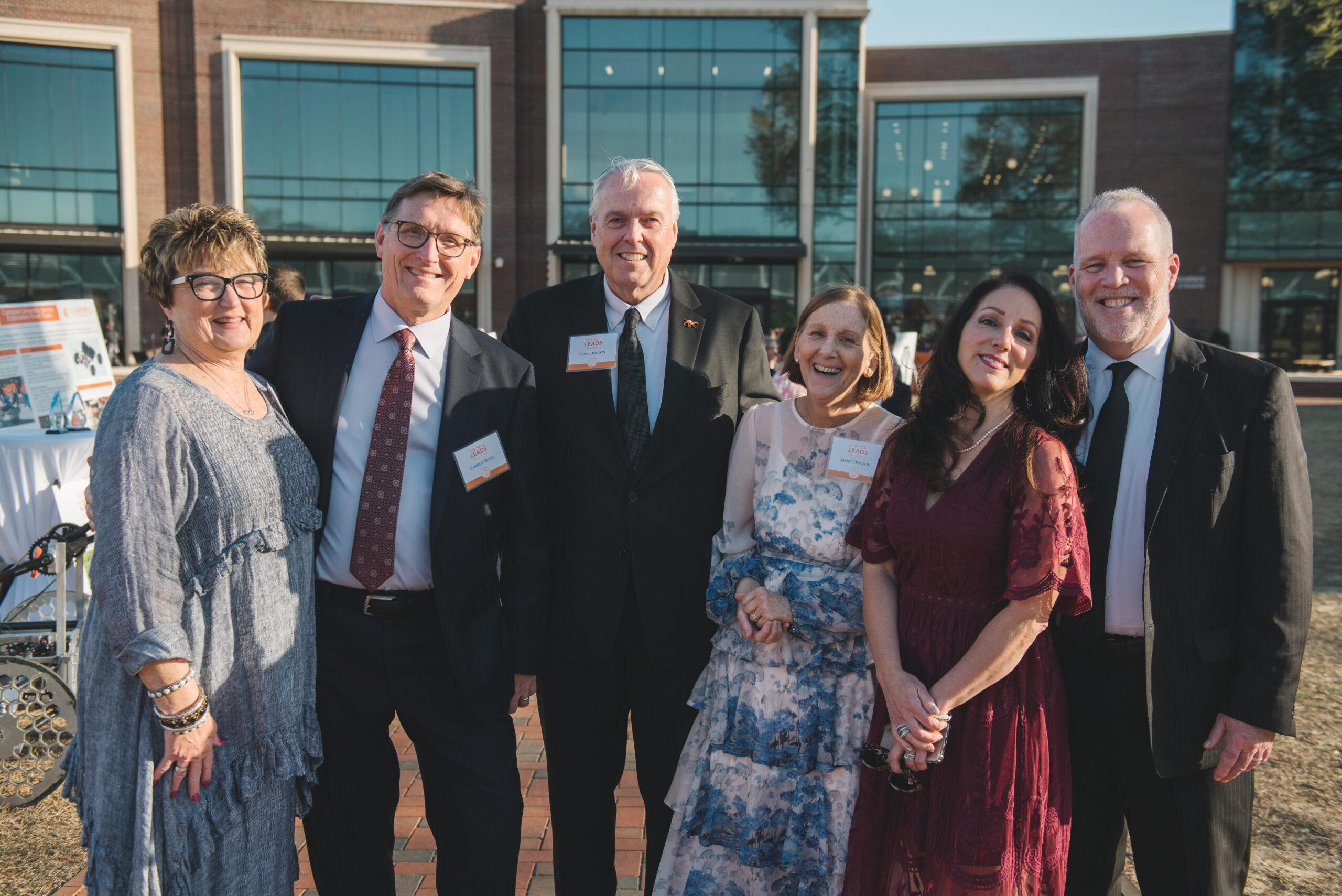 The Gala also provided an opportunity for students to express their gratitude. More than $44 million of the money raised in the campaign has gone toward or is going toward endowed and direct aid scholarships to support Campbell students in perpetuity, ensuring they will have the opportunity to receive a Campbell education despite challenging financial circumstances.

PharmD student Kafi Friday was the subject of a four-minute video about her journey from growing up in Trinidad and Tobago and moving to New York after high school and eventually coming to Campbell to continue her education and find her calling as a pharmacist.

“I am extremely grateful for your contribution and the spark you have given me to continue pursuing my dreams,” Friday said. “My scholarship means that you believe in my future, my vision and that I can make a difference.”

Student body President Zach Winston said the scholarships have made an “immeasurable impact” on the ability for students to attain a Christian-based education and focus on their studies instead of their financial circumstances.

“These scholarships allow for students to gain a head start on their careers,” he said. “Each and every penny has gone toward making a lifelong impact on the lives of students at Campbell, and on behalf of the entire student body today and for decades to come, I offer my deepest and utmost gratitude to you.”

GRATITUDE WITH A GIVEN PURPOSE 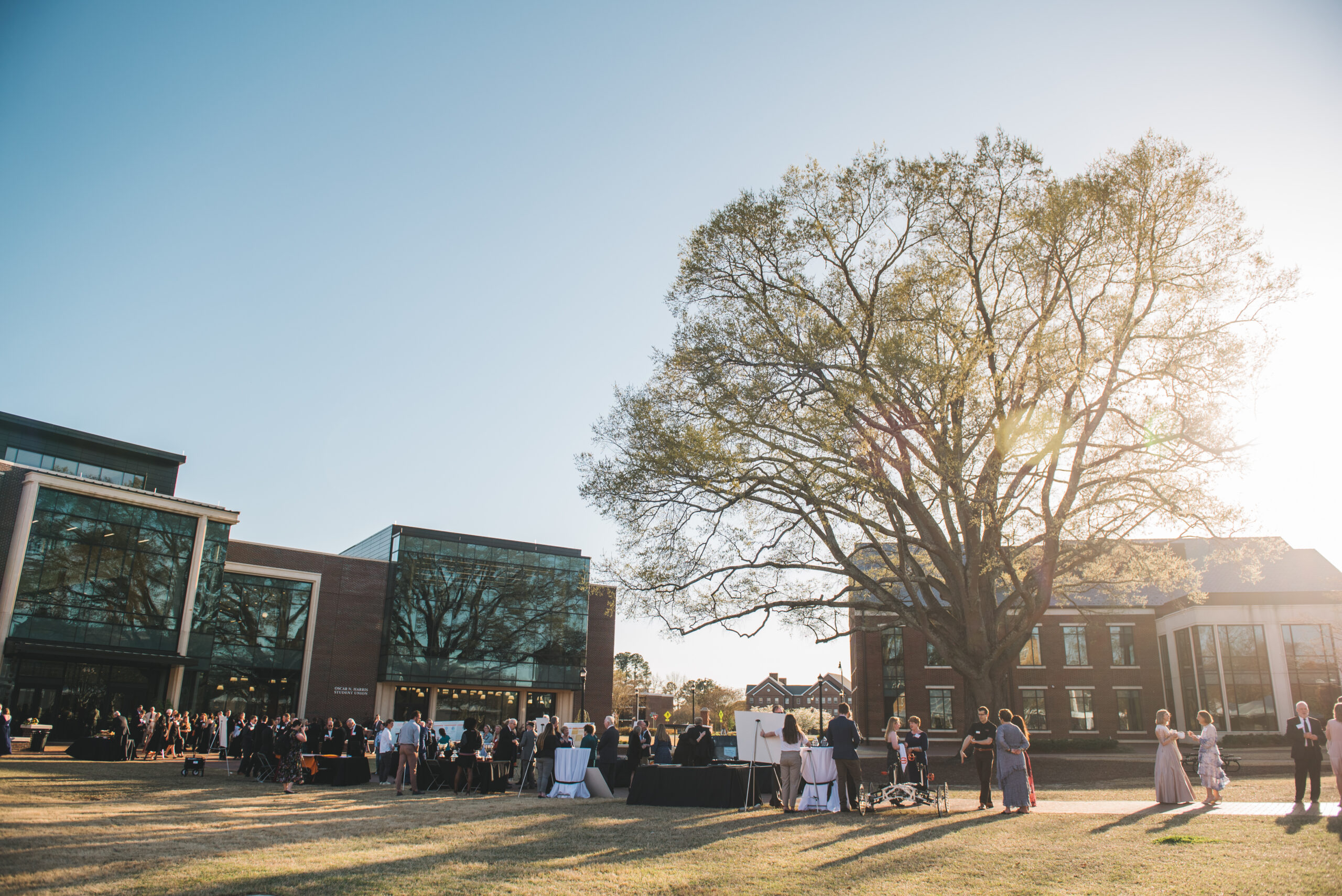 At Friday’s Gala, student alumni ambassador Samantha Sakyi-Nyante read a poem she wrote in honor of the Campbell Leads campaign and its impact.

Leading with purpose
What does that mean?
Expressing my gratitude
How does that seem?

It is a wonder
And, has been a wonder from the start
Where is this place?
Listen and you’ll see
Look and you’ll hear
Be still and you’ll know
It is where people gather
And, gather to behold
Gather, and are shown

As the sun glistens on our campus,
I recognize God’s beauty
A beauty so new, yet known
So many stories are being told
I’m aware, yet I wonder
I know, yet I ponder
The amazing generosity found in this beautiful place

Leading with purpose
Now you know
With faith and courage
The places there are to go
Our community is not done yet
Our song must also not forget
The conviction of our faith
And, the gratitude that makes us say

Giving with purpose
If you only knew