“Having a suspended driver’s license impacts almost every aspect of a person’s life, from housing, to family, to employment. It’s incredibly difficult to get a job without a valid license, even if the job doesn’t involve driving,” said Professor Emily Mistr, who is an attorney for the clinic.

The goal of the event was to serve individuals whose licenses are suspended due to unpaid fines and fees or failures to appear in court on traffic charges. Eleven Campbell Law students and their supervising attorneys assisted participants with completing paperwork to ask the court to remit unpaid monies, and they talked to DAs onsite about resolving traffic cases where people failed to appear in court. In addition to the 41 clients served on-site, students were also able to help resolve issues suspending licenses for an additional four people whose in-person attendance was not necessary at the clinic.

“It’s such a privilege to be able to come out into the community .. and to be given the opportunity to use my legal education in a very tangible and meaningful way,” said Maeve Healy ’22, a certified legal intern in the clinic.

The clinic was offered through a partnership between the Blanchard Community Law Clinic, the Equal Access to Justice Commission’s Faith and Justice Alliance and the District Attorney’s Office for Edgecombe, Nash and Wilson counties.

It was the first clinic of its kind in the state to offer this type of service to an entire multi-county prosecutorial district, according to Blanchard Community Law Clinic Director Ashley Campbell.

“We’re very thankful that Campbell Law students are coming down from the clinic to help people in this area,” said Travis Ellis, Assistant District Attorney for District 8. 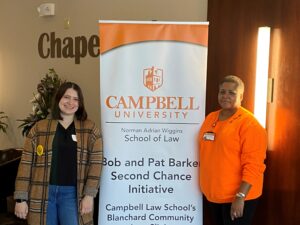 In Wilson County, 23.1% of the population live in poverty while that number is 28% in Edgecombe County and 20% in Nash County — all well above the state-wide rate of 15.4%.

The event was scheduled as a follow-up to DA-initiated mass debt relief, which District 8 had completed in 2021, Campbell explained. For that, the Pro Bono Resource Center and the North Carolina Equal Access to Justice Commission worked closely with the North Carolina Administrative Office of the Courts (AOC) to provide elected District Attorney Robert Evans a list of traffic cases in which unpaid fines and fees were leading to a driver’s license suspension. District Attorney Evans then filed Motions to Remit in several thousand cases. The March 4 clinic provided additional services to those whose licenses still remained suspended following the mass debt relief efforts.

In November 2020, Campbell University alumni Bob and Pat Barker gave Campbell Law School $200,000 to expand the work of the Blanchard Community Law Clinic through the state’s new Second Chance Act, which aims to reduce unemployment barriers for individuals who have a criminal record of non-violent misdemeanors or dropped charges.

“Thanks in large part to this generous donation from Bob and Pat Barker, Campbell Law’s Blanchard Community Law Clinic will be able to hire additional attorneys to work with our Clinic Director Ashley Campbell allowing triple the number of our law students to assist with the growing number of expunction requests made possible by the Second Chance Act,” Leonard explained. “In addition, the funding allows us to go mobile with our clinic services and expand our reach to help those in rural areas of Eastern North Carolina. Our goal is to create a model for others to similarly help rural areas throughout the state.”

Since its founding in 1976, Campbell Law School has developed lawyers who possess moral conviction, social compassion, and professional competence, and who view the law as a calling to serve others. Among its accolades, the school has been recognized by the American Bar Association (ABA) as having the nation’s top Professionalism Program and by the American Academy of Trial Lawyers for having the nation’s best Trial Advocacy Program. Campbell Law boasts more than 4,500 alumni, who make their home in nearly all 50 states and beyond. In 2021, Campbell Law celebrated 45 years of graduating legal leaders and 12 years of being located in a state-of-the-art facility in the heart of North Carolina’s Capital City.