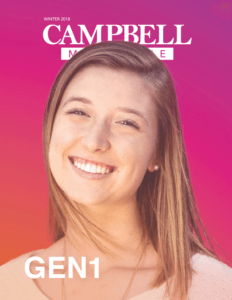 Campbell Magazine earned two Grand Awards — the highest honor in each category — for writing. The Winter 2018 cover story on first-generation college students — Gen1 | The Struggles (and Triumphs) of a First-Generation College Student — won top honors for feature writing. The story was written by Editor and Director of News & Publications Billy Liggett. Liggett, Kate Stoneburner and Elizabeth Edwards also earned a Grand Award for Publications Writing for their work in the Spring 2018 cover feature, The Power of Rural, about Campbell University’s work in making rural areas a better place to live throughout the state and region.

Bronsink, Assistant Vice President for Institutional Advancement Jason Gipe and former staff writer Leah Jarvis teamed up to earn a Grand Award in the Writing for Fundraising category for their work on the Campbell Leads campaign case statements in 2018. The case statements also earned an Award of Excellence for best Fundraising Publications.

The campaign itself earned Special Merit in the Fundraising category, a Platinum category as it encompasses the entire work of Campbell’s fundraising department.

“Our Advancement team at Campbell University continues to outperform its peers in the Southeast — some of them much larger schools,” Vice President for Institutional Advancement Britt Davis said. “I’m continually impressed by the caliber of work you see in our publications, our social media and marketing and in our fundraising campaigns. I would put our team up against any in the nation.”