NCTC is a national invitational tournament featuring 16 of the best advocacy programs in the country.  To receive an invitation to NCTC, law schools must demonstrate excellence in mock trial competitions and a commitment to training law students in litigation skills.

Terry explained: “Goss and McLaughlin flipped masterfully as lawyers between representing both sides of the case, often on the same day. The team skillfully defeated their opponents and later learned they advanced to the qualifying rounds. At NCTC, when you advance, the facts of the case are fundamentally altered the night before the next round. Our team quickly began to prepare to handle those changes.”

“Ultimately, our team placed as semifinalists,” Terry added. “A fantastic showing for Campbell Law at a tremendously competitive competition.” 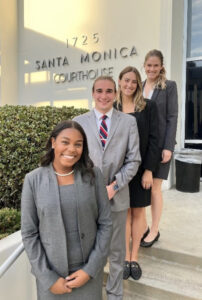 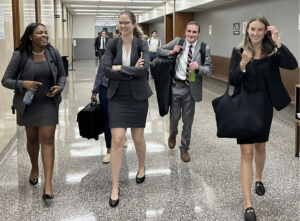 On the same day, Campbell Law third-year students Charlie King and Rebecca Pierce competed in the National Veterans Law Moot Court Competition (NVLMCC) from Nov. 5-6, 2022, ultimately reaching the quarter-finals. The team also earned the runner-up award for best brief. In honor of their success, they received an award from sitting judges of the Court of Appeals for Veterans Claims, whom they are pictured with. The team was proudly coached by Patrick Wilson and Kirk Warner of Smith Anderson Law Firm. 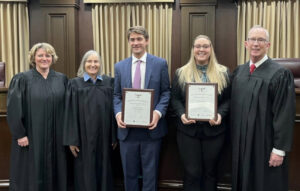 The NVLMCC is sponsored annually by the U.S. Court of Appeals for Veterans Claims (CAVC), the Court of Appeals for Veterans Claims Bar Association and the George Washington University Law School (GWLaw). The NVLMCC is the nation’s premier moot court focusing on veterans law. Hosted close to Veterans Day each fall in Washington, D.C., NVLMCC brings together teams of two students from around the country to argue cutting-edge veterans law issues before panels of distinguished practitioners and judges. The judges for the briefs and the oral arguments are drawn from the ranks of experienced veterans law practitioners.

“They did really well and we’re very proud of them,” Waugaman said. 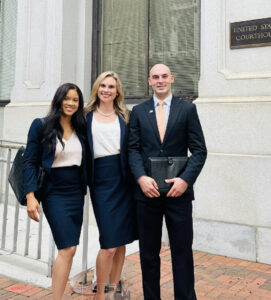 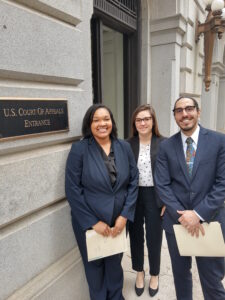 “Please join me in congratulating these outstanding student advocates and their coaches for their success, dedication
and hard work in representing Campbell Law,” Terry said. “Two teams brought back some hardware to add to our trophy cases. It is a testament to the skill and dedication of our students that the Trial Advocacy Team and Appellate Advocacy Team can both dominate in the same weekend. A wonderful job by all our teams!”

Since its founding in 1976, Campbell Law has developed lawyers who possess moral conviction, social compassion, and professional competence, and who view the law as a calling to serve others. Among its accolades, the school has been recognized by the American Bar Association (ABA) as having the nation’s top Professionalism Program and by the American Academy of Trial Lawyers for having the nation’s best Trial Advocacy Program. Campbell Law boasts more than 4,700 alumni, who make their home in nearly all 50 states and beyond. In 2021, Campbell Law celebrated 45 years of graduating legal leaders and 12 years of being located in a state-of-the-art facility in the heart of North Carolina’s Capital City.