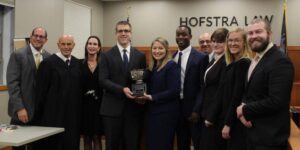 Hill was also the outstanding advocate trophy winner. The Campbell Law team was the No. 1 seed throughout the advanced rounds. The team defeated Chicago-Kent School of Law in the final round.

Dean J. Rich Leonard said, “Congratulations to our incredible advocates and their remarkable coach for bringing home another national title and the hardware!”

The Maurice A. Deane School of Law at Hofstra University, in conjunction with the Zucker School of Medicine at Hofstra/Northwell created the tournament two years ago with a focus on the impact expert witnesses can have on trial outcomes, according to the website.

“An expert witness will be assigned to each school for each side of the case upon release of the fact pattern. The witness will be a student from our Medical School and will be prepared by the competitors via skype/phone/videoconference or email. The expert witness may be cross examined on any relevant material to their testimony, including literature not contained in the fact pattern. Student advocates must direct and cross-examine expert witnesses using every available tool – including qualifications, methodology, proper application, bias, etc.”

The tournament selects 10 law schools and mock trial coaches with a history of success in mock trial competitions to compete over a three-day period.

Since its founding in 1976, Campbell Law has developed lawyers who possess moral conviction, social compassion, and professional competence, and who view the law as a calling to serve others. Among its accolades, the school has been recognized by the American Bar Association (ABA) as having the nation’s top Professionalism Program and by the American Academy of Trial Lawyers for having the nation’s best Trial Advocacy Program. Campbell Law boasts more than 4,200 alumni, who make their home in nearly all 50 states and beyond. In 2019, Campbell Law will celebrate 40 years of graduating legal leaders and 10 years of being located in a state-of-the-art facility in the heart of North Carolina’s Capital City.