FALLS CHURCH, VIRGINIA – Campbell Law alumnus Stuart Couch ’96 has been appointed to the U.S. Board of Immigration Appeals (BIA). BIA Chairman David L. Neal presided over the investiture during a ceremony held Aug. 23, 2019, at EOIR headquarters. All six new board members were appointed by Attorney General William Barr in August 2019, according to a press release from the U.S. Department of Justice Executive Office for Immigration Review. 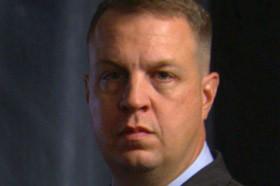 The BIA hears appeals from immigration courts across the country and issues a number of important precedential decisions every year. For this reason, the new Board Members will be important to the interpretation of the immigration laws for years to come, according to a blog post by Eliza Grinberg. All six members have served previously as immigration judges, and most have extensive prior experience with the various immigration components of the federal government.

Couch joined the board after serving as an immigration judge since 2010, when he was initially appointed by former Attorney General Eric Holder. He earned a B.A. in political science from Duke University in 1987, a Juris Doctor from Campbell Law in 1996 and a Master of Laws in litigation and dispute resolution in from George Washington University in 2008.

According to his bio, Couch served as an immigration judge in Charlotte for nearly a decade following a short stint there in private practice. Most of his prior experience came as a military judge and lawyer, including stints as a military appellate judge and as a prosecutor at Guantanamo Bay.

From 2006 to 2009, Couch served as a senior appellate judge on the U.S. Navy-Marine Corps Court of Criminal Appeals in the District of Columbia. From 2003 to 2006, he was assigned to the Department of Defense, Office of Military Commissions as a senior prosecutor for select detainees held at Guantánamo Bay, Cuba.

Couch is a member of the North Carolina State Bar.

State of the University