RALEIGH — Campbell Law School conferred 104 Juris Doctor degrees at its 41st annual hooding and graduation ceremony on Friday, at Memorial Auditorium at the Duke Energy Center for the Performing Arts.

The U.K.’s Nottingham Law School conferred four degrees on the inaugural class of Master of Laws (LL.M.) graduates, who were hooded by Matthew Homewood, head of Nottingham’s postgraduate programmes. This novel degree is earned through a collaboration between Campbell Law and Nottingham Law schools. Derek Dittmar ’19 won the award for being the top student among the LL.M. graduates.

U.S. Court of Appeals for the Fourth Circuit Judge Albert Diaz delivered the commencement address. His remarks touched on the fact the graduates were not done learning as well as the value of law in society. 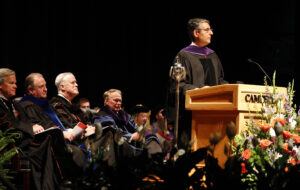 “It’s a profession that requires lifelong study,” Judge Diaz said of being a lawyer. “It also provides an avenue to help people … the law remains a singular engine for change in our society.”

Campbell Law Dean J. Rich Leonard said,” Graduates, today is a transitional point in your lives. For the rest of your days, no matter what you are doing, whether you are a prosecutor or a public defender, a civil litigator or a criminal defense attorney, a judge, a corporate officer, a government official, or a parent at home raising children, when the question is asked, ‘What do you do?’ you are entitled to proudly answer, ‘I am a lawyer.’

Wrapping up his remarks, he added, “And finally, remember this: your life is no longer a series of short sprints, measured by semesters, exams, and holiday and summer breaks. It is now a marathon, and there will be hills and valleys. The trick is to recognize and respond to the different terrains as you come to them, so at the end you can look back with satisfaction and say, ‘That was a life well-lived.’”

Since its founding in 1976, Campbell Law has developed lawyers who possess moral conviction, social compassion, and professional competence, and who view the law as a calling to serve others. Among its accolades, the school has been recognized by the American Bar Association (ABA) as having the nation’s top Professionalism Program and by the American Academy of Trial Lawyers for having the nation’s best Trial Advocacy Program. Campbell Law boasts more than 4,200 alumni, who make their home in nearly all 50 states and beyond. In 2019, Campbell Law will celebrate 40 years of graduating legal leaders and 10 years of being located in a state-of-the-art facility in the heart of North Carolina’s Capital City.