RALEIGH — Campbell Law School is ranked as the ninth most devout Christian school in the nation by preLaw Magazine, a National Jurist Publication, in its Winter 2019 edition.

This ranking is based on the University’s religious-focused curricula, organizations, and student involvement. 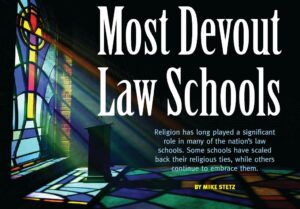 “We encourage students every day to examine the relationship between spiritual and legal topics, to explore the theological foundations for law, to think differently about justice and the legal system, and to consider how they can contribute toward a more just and merciful society while respecting every student’s freedom to religion,” says Campbell Law Dean J. Rich Leonard.

Campbell Law provides students with courses that delve into topics interdependent with Christian perspectives and law. Courses such as Christian Perspectives on Legal Thought and Introduction to Legal Theory: Ancient to Modern, explore the theological nature of law, Christian conceptions of justice and religiously-informed critiques of American legal history.

The University also offers a dual Juris Doctor and Master of Divinity degree to integrate the fields of law and ministry. This program is tailored to provide each student with the best blend of the two disciplines, “each of which can be viewed as a calling to serve others.”

As preLaw wrote in their rankings: “As a part of a Baptist university, the law school incorporates religion into its teachings. Yet it stresses that students are not obligated to embrace a particular kind of thinking. Instead, it wants students to have open minds.”

Since its founding in 1976, Campbell Law has developed lawyers who possess moral conviction, social compassion, and professional competence, and who view the law as a calling to serve others. Among its accolades, the school has been recognized by the American Bar Association (ABA) as having the nation’s top Professionalism Program and by the American Academy of Trial Lawyers for having the nation’s best Trial Advocacy Program. Campbell Law boasts more than 4,200 alumni, who make their home in nearly all 50 states and beyond. In 2019, Campbell Law celebrates 40 years of graduating legal leaders and 10 years of being located in a state-of-the-art facility in the heart of North Carolina’s Capital City.