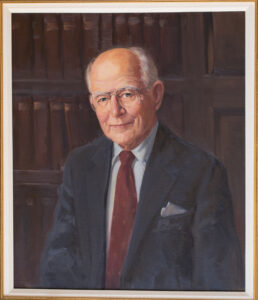 RALEIGH – Campbell Law School will rename its deeply impactful Community Law Clinic in honor of legal pioneer and servant leader Charles Fuller Blanchard with a ribbon cutting ceremony at the clinic this Wednesday, Feb. 7 at 5 p.m. A reception will follow immediately afterward at the North Carolina State Bar.

“The Blanchard Family is honored to partner in the great work of this Community Law Clinic,” said Anna Neal Blanchard, daughter of Charles Blanchard. “As we see it, the clinic serves the dual purposes of offering quality legal representation to those who can’t afford it and helping third-year law students develop their interest in social justice and their litigation skills. We are grateful for the vision for and leadership of Campbell Law and look forward to seeing the community at large benefit from this model.”

Born in Hamlet, N.C. in 1923, Blanchard and his family moved to Raleigh when he was three years old and the city has remained his home. He served his country as a Lieutenant J.G. in the U.S. Navy in World War II, and then returned home to graduate from Duke Law. He opened his own law practice in 1949 in Raleigh and Fuquay-Varina. Blanchard was the senior partner at Blanchard, Miller & Lewis, P.A. until becoming of counsel in 2000.

Outside of the legal profession, he has been an active member of St. Michaels Episcopal Church for more than 60 years, where he served two terms as senior warden, Sunday school teacher and past president of the N.C. Episcopal Foundation. Throughout his adult life, Blanchard has served on many community boards including the Raleigh Rescue Mission, Residential Support Services, and St. Augustine’s College. In 2015 he was awarded the Lifetime Achievement Award by the Arc of Wake County for his work for those with disabilities.

His tireless professionalism, dedication to his community, and love for his family has made him a pillar of the North Carolina legal community.

“If you dig deep enough, almost every important legal initiative in this community traces back to Charlie Blanchard,” said Campbell Law Dean J. Rich Leonard. “There is no one who has done more for this city, and no one whose name is more appropriate to mark our clinic.”

“We are thrilled that this clinic will be named for Charlie, who is dedicated to the idea that all people, regardless of income, are entitled to access the courts,” said Blanchard Community Law Clinic Director Ashley Campbell. “Charlie’s gift will allow us to grow the work of the clinic and to begin a robust lawyer referral program, which will allow local lawyers to provide pro bono legal services to clinic clients.”

The clinic, which was launched in September 2016, has made a tremendous impact in the Raleigh community within short period.

The Blanchard Community Law Clinic partners with non-profit agencies in the community (including Alliance Medical Ministry, StepUp Ministry, the Raleigh Rescue Mission, and Urban Ministries) to provide solutions to legal problems encountered by clients of those agencies. The clinic provides representation, advocacy, education and reconciliation for its clients while delivering valuable and practical knowledge to law school students.

To date the clinic has handled more than 100 cases, including expunctions, family disputes, domestic violence protection orders, landlord/tenant issues, and many others. In recent days, the clinic received its first monetary settlement as a result of a landlord violating the Fair Housing Act by charging a pet fee for a service animal.

Through this experience, students gain important practical legal skills and an appreciation for the challenges faces by citizens living in poverty. This program prepares students to be resourceful and practice-ready upon their entrance into the profession.

The clinic is located off-site at the beautiful and historic Raleigh landmark, the Horton-Beckham-Bretsch House. A grant of $150,000 from the Z. Smith Reynolds Foundation, in addition to financial support from other donors, made the initial launch of the clinic possible.