RALEIGH — Members of the Campbell Law Review hosted “Symposium 2022: The Solutions Manual” on Friday, March 25. The symposium featured renowned speakers from across the country participating in panel discussions on a variety of current legal issues, including the legalization of marijuana, qualified immunity and the non-delegation doctrine. The event was hybrid allowing speakers and attendees the choice to attend the event remotely or in-person at the law school. 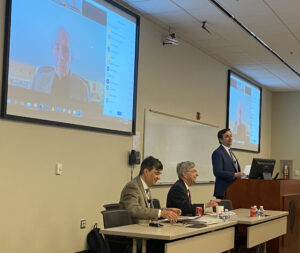 Since its founding in 1976, Campbell Law has developed lawyers who possess moral conviction, social compassion, and professional competence, and who view the law as a calling to serve others. Among its accolades, the school has been recognized by the American Bar Association (ABA) as having the nation’s top Professionalism Program and by the American Academy of Trial Lawyers for having the nation’s best Trial Advocacy Program. Campbell Law boasts more than 4,500 alumni, who make their home in nearly all 50 states and beyond. In 2021, Campbell Law celebrated 45 years of graduating legal leaders and 12 years of being located in a state-of-the-art facility in the heart of North Carolina’s Capital City.