It’s also one of the most diverse classes to enter the law school with 16 percent of its members identifying as students of color.

“Today is my favorite day of the year,” Dean J. Rich Leonard told the incoming students during his welcome remarks.

On Aug. 5, the new students and their families enjoyed a social BBQ dinner hosted by the Dean at Haywood Hall. 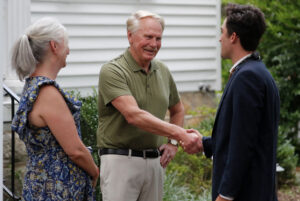 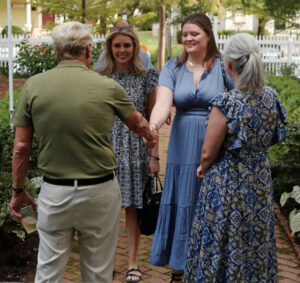 On Aug. 12, the students took the Professionalism Oath delivered by Robeson County Chief District Court Judge Angelica Chavis McIntyre ‘13 in the morning followed by the Dean’s annual afternoon Campbell Law Court Crawl — a tour of all of the local, state and federal courts in downtown Raleigh. 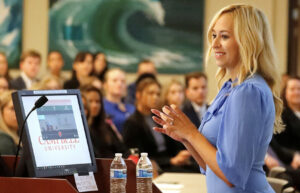 McIntyre, who is the first Native American female chief district court judge in North Carolina, told the students during her remarks that the “Judges of Campbell Law” exhibit in the hallway represents more judges who graduated from Campbell Law School than any other law school in the state. Elected to the district court bench in 2018, McIntyre was appointed to her current position in January 2021.

“I knew when I went to law school here I wanted to be a judge,” she said. “I did it in just five years and you can too.”

More Orientation photos can be found at this link. 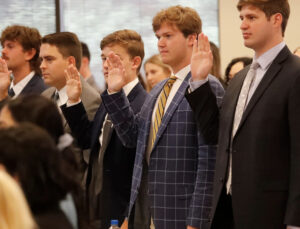 Since its founding in 1976, Campbell Law has developed lawyers who possess moral conviction, social compassion, and professional competence, and who view the law as a calling to serve others. Among its accolades, the school has been recognized by the American Bar Association (ABA) as having the nation’s top Professionalism Program and by the American Academy of Trial Lawyers for having the nation’s best Trial Advocacy Program. Campbell Law boasts more than 4,700 alumni, who make their home in nearly all 50 states and beyond. In 2021, Campbell Law celebrated 45 years of graduating legal leaders and 12 years of being located in a state-of-the-art facility in the heart of North Carolina’s Capital City.