Entitled “Preponderance,” the sculptures were commissioned as part of the celebration of the 40th anniversary of law school’s first graduating class and the 10th anniversary of the law school’s groundbreaking move from Buies Creek to downtown Raleigh. The installation was the brainchild of Sayre along with Campbell Law Dean J. Rich Leonard and art aficionado Kathy Creed, wife of Campbell University President Dr. J. Bradley Creed. “Preponderance” – named after the legal standard of evidence – will soar 22 feet tall (more than three times the height of the average person) above the law school’s main entrance off Hillsborough Street.

“The origins of some of Raleigh’s most iconic symbols trace back to Thomas Sayre,” Dean Leonard said. “We are beyond proud to partner with his vision and debut one of his stunning monuments, adding to our city’s vibrant network of works of art for all to enjoy.”

Sayre added, “Campbell Law’s gift of public art to the City will make a great addition to the growing downtown Raleigh cityscape. This installation is a visible representation of the evidentiary standard in courts today and its signature form embodies the mission of Campbell Law School and applauds its legacy to our state – both past, present and future.”

Sayre, a sculptor, painter and founding principal of the multi-disciplinary design firm Clearscapes, designs and builds public art projects and private commissions all over the world. Famous locally for his large public sculptures including the Gyre rings at the N.C. Museum of Art, the “Shimmer Wall” at Raleigh Convention Center, the “World Wall” at Marbles Kids Museum and the “Oberlin Rising” project, Sayre has completed more than 50 projects across the country and abroad.  He grew up in Washington, D.C., attended the University of North Carolina at Chapel Hill and moved to downtown Raleigh in the early 1990s. A true urban pioneer, Sayre and his late business partner architect, Steve Schuster are credited with the transformation of Raleigh’s Warehouse district into the thriving destination it is today. In 2018, Sayre was inducted into the Raleigh Hall of Fame for lasting contributions to the city. He is also a recipient of the North Carolina Award from the N.C. Department of Cultural Resources, the state’s highest civilian honor. He has an honorary doctorate from North Carolina State University. 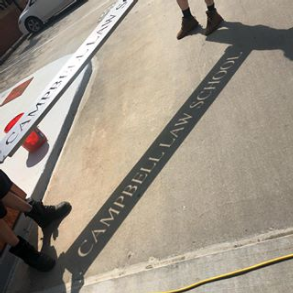 Since its founding in 1976, Campbell Law has developed lawyers who possess moral conviction, social compassion, and professional competence, and who view the law as a calling to serve others. Among its accolades, the school has been recognized by the American Bar Association (ABA) as having the nation’s top Professionalism Program and by the American Academy of Trial Lawyers for having the nation’s best Trial Advocacy Program. Campbell Law boasts more than 4,200 alumni, who make their home in nearly all 50 states and beyond. In 2019, Campbell Law celebrated 40 years of graduating legal leaders and 10 years of being located in a state-of-the-art facility in the heart of North Carolina’s Capital City.