CHARLOTTE, N.C.  –   Campbell Law School’s traveling exhibit honoring the contributions of trailblazing African American judges in North Carolina has landed at the Mecklenburg County Courthouse, where it will be on display through May 6.

“I commissioned this exhibit because I felt it was important to highlight these trailblazing individuals,” Campbell Law Dean J. Rich Leonard explained. “I am proud of this curation and believe audiences around the state might benefit from learning about those who achieved great success against difficult odds.”

The exhibit, which is made up of eight banners featuring highlights of each judge, can be viewed in the Mecklenburg County Courthouse at 832 E 4th St.

“We are very grateful for the opportunity to have these banners on exhibit here in Mecklenburg County,” said Diana Orozco of the North Carolina Judicial Branch in Charlotte. “As soon as they were placed on display, several members of the public and staff stopped to peruse the exhibit. This is a great opportunity to educate the public about African Americans that have made history by achieving such ground breaking accomplishments in the judicial system.” 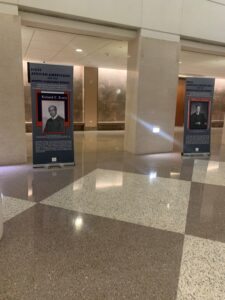 The permanent installation was dedicated at Campbell Law in February 2019 as part of Black History Month. The banners have previously been on public display at the City of Raleigh Museum, Saint Augustine’s University, Wake County Courthouse and most recently, Fayetteville State University.

“Our goal has been to have the banners travel around to different parts of ‘The Old North State’ to help broaden the exhibit’s reach,” Leonard said.

Since its founding in 1976, Campbell Law has developed lawyers who possess moral conviction, social compassion, and professional competence, and who view the law as a calling to serve others. Among its accolades, the school has been recognized by the American Bar Association (ABA) as having the nation’s top Professionalism Program and by the American Academy of Trial Lawyers for having the nation’s best Trial Advocacy Program. Campbell Law boasts more than 4,500 alumni, who make their home in nearly all 50 states and beyond. In 2021, Campbell Law celebrated 45 years of graduating legal leaders and a dozen years of being located in a state-of-the-art facility in the heart of North Carolina’s Capital City.