“A good friend of mine, a retired Army colonel, once told me to give the bottom line up front,” said Besser, president and CEO of the Robert Wood Johnson Foundation and former chief medical editor for ABC News. “It doesn’t always work. If you tell the punchline before the joke, it’ll flop. Reveal the killer first in a murder mystery, it doesn’t go well.”

Besser’s advice: Don’t be afraid to wander off course and try new things. In our GPS world, we’re too focused on the straight line between two points, and we forget to stop and look around.

“Pursue your dreams, honor your inspiration to serve … that’s what attracted many of you to Campbell in the first place,” he said. “If you’re lucky enough to have a passion, don’t let it go. And don’t be afraid to try new things. Experience the moment. Turn off the GPS, and don’t be afraid to take the local roads.”

Besser spent the next 15 minutes of his address sharing stories of his off-road adventures at Saturday’s main campus commencement, the fifth of six total ceremonies hosted by Campbell over a three-day span. This ceremony was the largest of the six, featuring the majority of Campbell undergraduates from the College of Arts & Sciences, as well graduates from the School of Education and the Lundy-Fetterman School of Business. In all, 1,258 Camels earned their degrees this weekend, and 1,629 this academic year. 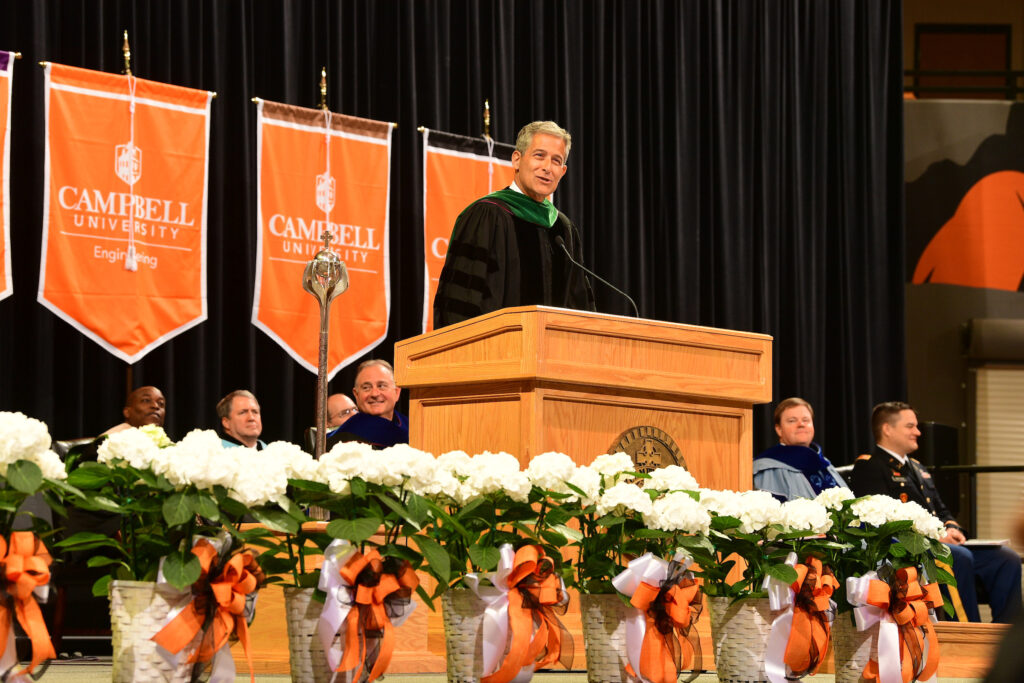 Besser shared with a packed Pope Convocation Center Saturday the story of his medical residency while a fourth-year med student at a hospital tucked within a rural HImalayan village in Manali, India. The physician overseeing the hospital left a young Besser in charge as he left for a weeklong meeting, but not before teaching him how to perform a Cesarean section “just in case,” as the nearest hospital was five hours away.

Of course, this knowledge was needed toward the end of the week. Besser performed an emergency C-section and delivered a healthy baby girl — the entire time hearing the prayers of the staff and the hospitals church. It was Besser’s first and last solo surgery, and it was a turning point in his life.

“I never got a game-winning hit in baseball, but I would imagine this is what it felt like,” Besser said. “It gave me the confidence to take on anything that may come my way.”

The Class of 2018 were freshman in 2014, a period of unprecedented growth for Campbell University. Over the past four years, these students have witnessed new programs (engineering and nursing), seen new buildings (Hall of Nursing & Health Sciences, new admissions building, improvements to athletic facilities) and saw the inauguration of just the fifth president in Campbell’s 131-year history.

“It seems like almost yesterday, we were roaming around campus, wearing our orange lanyards and trying Marshbanks for the first time,” Class of 2018 senior president Clotilde Druhen said to her fellow graduates. “And since the beginning, we’ve witnessed a lot of change, from beautification to the [start of] construction of a new student center. Meanwhile, we’ve prepared for and were taught to adapt to the changing world around us. We’ve lived through different technological advances like the first organ transplants using 3D printing; impending peace between North and South Korea; political reform and so much more. But remember, the people involved in these changes were once graduates just like you, filled with a passion and determination that they can change the world for the better.” 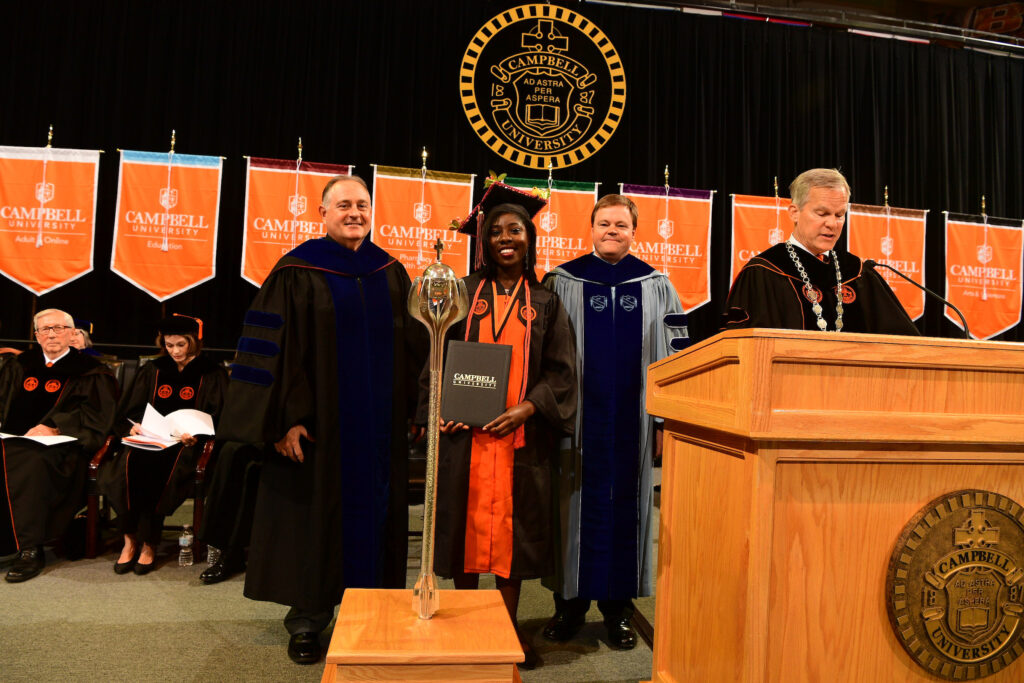 One of those students with a passion to change the world is Rasheda Boachie, who earned her degree in biology with a pre-med concentration on Saturday. Boachie was the student recipient of the Algernon Sydney Sullivan Award (Dunn Mayor Oscar Harris received the alumni award), for her efforts in serving her community while a student at Campbell. A peer mentor for freshmen, a tutor, president of the Pre-Med Allied Health Society, a Presidential Scholar and a clinic volunteer at Rex Hospital, Boachie said she was honored to receive the recognition for “elevating others as you lift yourself up.”

“These past four years, I’ve simply been reflecting the behavior that I’ve seen around me,” she said. “The fact that professors and students alike are always willing to give a helping hand has really struck me during my time at Campbell. I believe that one of the best ways to express your gratitude is to offer the best of yourself, and receiving this award has motivated me to continue to do so in the future.”

Besser concluded his speech with the story of a light, though meaningful moment in his life, sharing sweet potato fries with a mother and her young children in a developing African nation while working with ABC News. The leading cause of preventable blindness in children, Besser says, is Vitamin A deficiency. Orange foods like sweet potatoes are rich in Vitamin A, but the sweet potatoes grown in Africa are white. Through the Hellen Keller International nonprofit group, a hybrid white and orange potato is now grown in this part of the world, and on this day, Besser shared these hybrid potatoes with the small family.

“The woman who fried them up was teaching others in her community the values of going orange — something we all know here at Campbell University — and as I sat there, something about the simplicity of this solution made me smile,” Besser said.

Besser now heads the Robert Wood Johnson Foundation, the nation’s largest public health philanthropy and the major supporter in Campbell’s recent launch of its Rural Philanthropic Analysis, which studies the most impactful uses of money donated to rural health causes.

“I know you’ve worked hard to earn your degree,” he told the graduates. “Allow yourself to wander, turn off the GPS and lean into the twists in the road that life gives you and don’t be afraid to change. You never know, you may end up eating sweet potatoes while saving the world.” 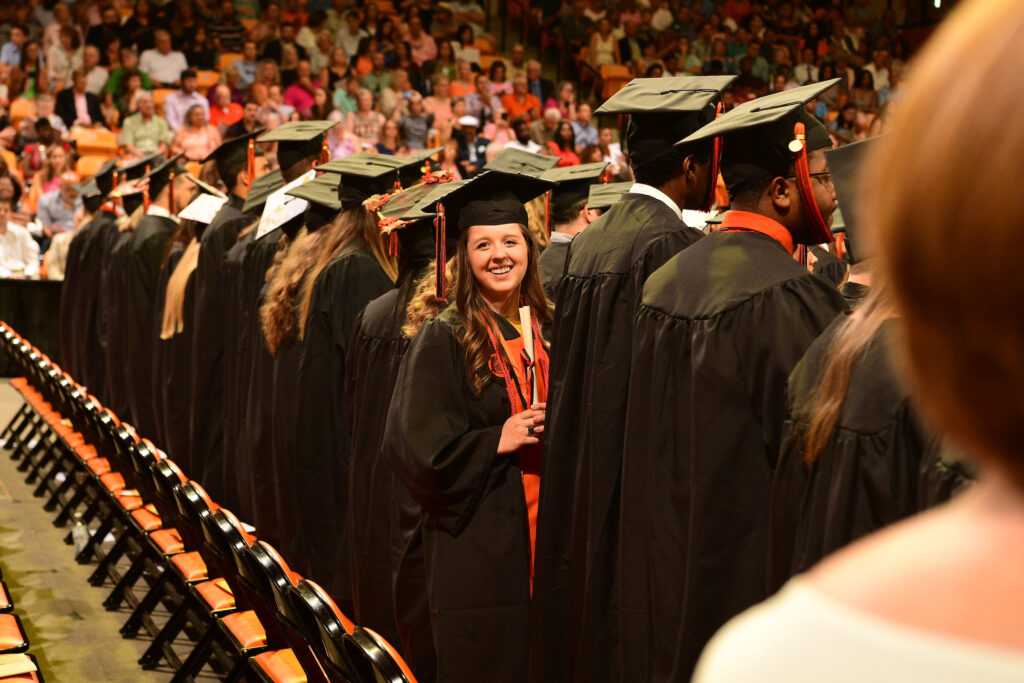 “There are endless things I could say about Campbell. I’ll remember the friendships I made, but I’m most thankful for the opportunities it afforded me. Everywhere I go, Campbell University is thought really highly of, and I found an amazing job in Raleigh because of my professors here. I’ll never forget playing lacrosse here, but the best memory is going to be today and seeing all my hard work pay off.” — Mackenzie Koeller

“I will always remember how loved and involved I felt here. It’s a home away from home.” — Amber Chauncey

“I came to Campbell from Buffalo, New York. I was accepted in April, put my deposit down and moved in for freshman year without ever having seen the campus. I just loved that it was far away and that it was a beautiful, warm campus. My favorite memory is meeting my lifelong friends — they’re real friends.” — Sarah Schneider

“I came to Campbell from Apex, only 40 minutes away. My sister came here, and I came here because it felt like home. When you walk around campus here, when you smile someone will smile back. The teachers always had time for me here.” — Laura Schnoor

“My dad went here for grad school, and I liked the campus, so it felt like home. It’s been a pretty smooth ride. The biggest challenge I faced here was deciding what to do with my time — there’s a lot of great organizations at Campbell and it’s just like a family.” — Andrew Sowers

We’ll just let the video speak for itself.