Any doctor can find the disease. But it takes a special physician to find the health in a patient.

“Finding the health” was a theme in the speeches during Thursday’s commencement ceremony for the second class of doctors from Campbell University’s Jerry M. Wallace School of Osteopathic Medicine.

From Dr. Barbara Walker, member of the University’s Board of Trustees who encouraged the students before her to “listen with your hearts and treat your patients with love” to Dr. Boyd R. Buser, immediate past president of the American Osteopathic Association who challenged the graduates to value their relationships with their patients — the 150 new Campbell physicians and 16 Master of Science in Biomedical Sciences grads left the Pope Convocation Center Thursday morning with a heightened sense of responsibility as they embark on their careers. 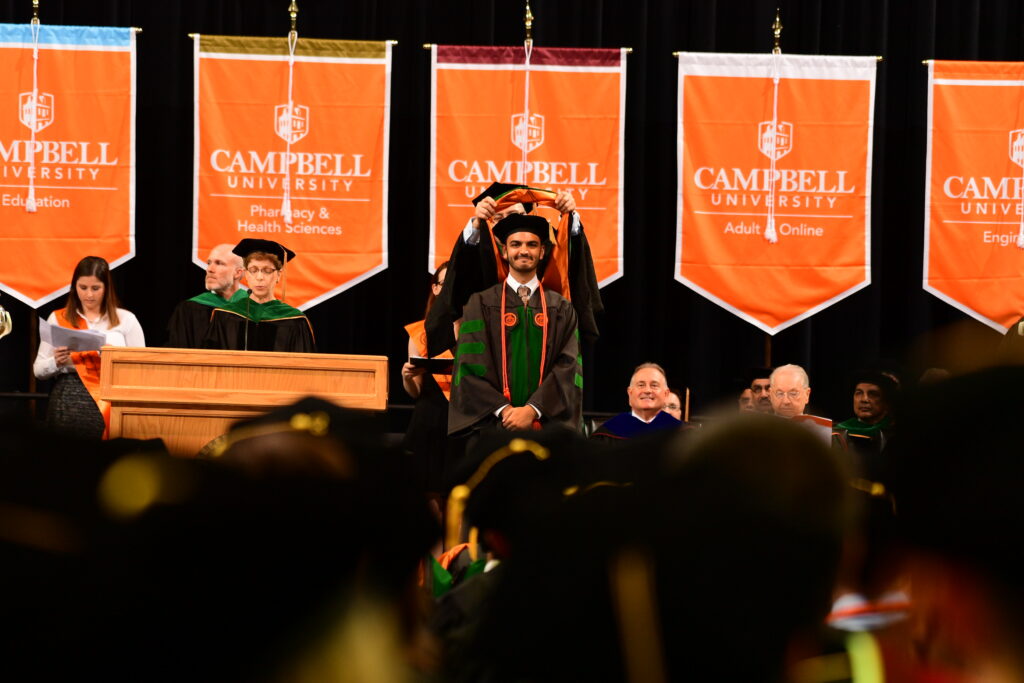 “You are now joining a proud profession, one that understands that a person’s health stems on body, mind and spirit,” said Buser, currently vice president of health affairs and dean of the University of Pikeville’s Kentucky College of Osteopathic Medicine. “Our nation faces challenges — a growing physician shortage, the continued struggle in preventing and managing chronic diseases and in preventing access shortages that keep patients from getting health care when and where they need it. But you, our next generation of osteopathic physicians, are in a position to face these challenges; many of you entering practices on the front lines of our most underserved areas.”

Campbell University has now trained 300 total osteopathic physicians, the first two classes for the school that opened its doors in August 2013. While a shortage remains nationally for licensed medical doctors, the number of Doctors of Osteopathic Medicine (DOs) has quadrupled in the last 30 years, according to Buser. He said DOs make up 14 percent of all physicians in the U.S. and nearly 20 percent of all family physicians.

Today, a fourth of all medical students in the country are attending osteopathic medical schools, and the majority of DOs are under the age of 45.

“It’s truly an exciting time to be an osteopathic physician,” Buser said. “When osteopathic principles and our approach to patient care are described to people, they say that’s what I want my doctor to be. And that is who you are.”

Thursday’s ceremony — in addition to her four years at Campbell — will have a lasting impact on Katherine Haga, a Minneapolis, Minnesota native and 2010 graduate of Arizona State University. 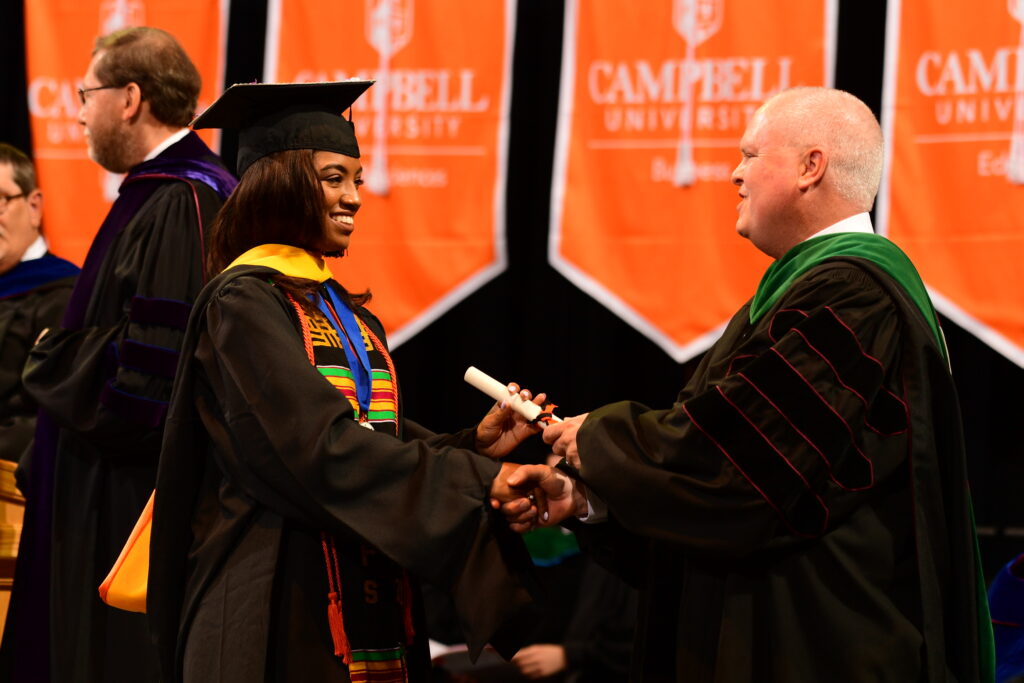 “We were given many things here at Campbell Medicine, from the faculty and staff to the facilities to the solid foundation of curriculum,” said Haga, honored earlier this week as a distinguished clinical scholar for family medicine. “I saw our class stand up for not only what is right, but for what should be different. I feel so honored to be a part of our class. The medical system we are entering is a bit broken, but together we can make an impact.”

“My experience [at Campbell] has been very welcoming and very successful,” said Shapiro. “I’ll never forget my classmates. They are the best friends I will probably ever have in my life. I am so excited to be a doctor.”

“This journey has been very exciting,” added Laurine, a Maryland native and recipient of the med school’s Global Health Award this week. “I’ve met so many great people and friends. I’m blessed with the opportunity Campbell has given me to work with such great physicians in both the classroom and clinical setting. Residency, here I come.”

Among the 16 Master of Science in Biomedical Sciences graduates was Mahalia Robinson, a Fayetteville native and 2015 graduate of North Carolina A&T State. A first-generation college student (and now the first in her family to earn a master’s degree), Robinson said Thursday’s ceremony was an opportunity to show her family, young and old, that they can do whatever they put their mind to.

“My experience at Campbell was very hard to get used to,” she said. “The curriculum was very rigorous, but I was able to excel and graduate with honors. I’ve gained another family here at Campbell.”

Robinson’s next goal, like the 150 graduates who became a doctor on Thursday, is medical school. 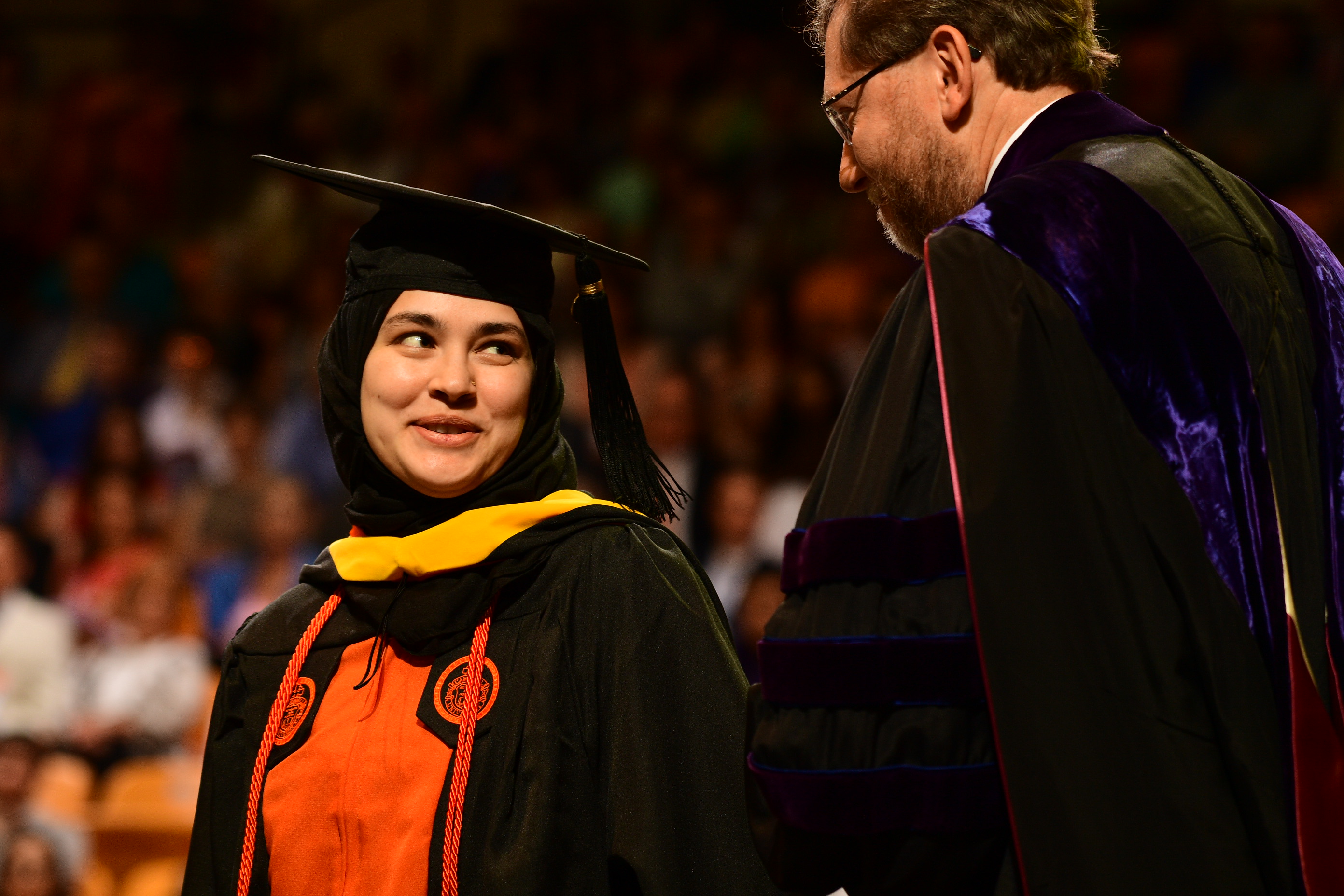 “I am confident you have received the very best education you could, and you’re prepared to practice your profession as soon as tomorrow. If I needed a doctor, I would trust myself to your care. If [this journey] was easy, anyone could have done it. And now you’re poised to celebrate an amazing accomplishment.”

“I remember the story of the physician who said the greatest medicine for any patient is love. The student, of course, doubted this and asked the physician, ‘What if that doesn’t work?’ The physician smiled and said, ‘Then increase the dose.’”

“Throughout your osteopathic education, you’ve learned to take the time to listen and learn about the whole patient, and how that can affect true healing more than treatment of a disease. Each of you understands this philosophy and will become successful physicians because of it. You’ve committed yourselves to making this world a better place for others. Go out and do something great, and never forget, a degree in osteopathic medicine is much more than the accumulation of years of hard work and a fancy piece of parchment. It’s a covenant … a pledge to not only respond to the medical needs of a patient, but their entirety as human beings.”