Complete rundown of all six commencement ceremonies at Campbell University

Nancy Duffy will likely see hundreds and hundreds of students earn their Bachelor of Science in Nursing degrees before her career is over. But that first class will always hold a special place in her heart.

“I know them by name, by face and I can probably tell you a story or something interesting about every single one of them,” said the director of Campbell’s nursing program. “That will certainly be difficult to do in the future — to maintain that level of familiarity every year. But I’m going to try.”

The Catherine W. Wood School of Nursing will graduate 44 students on Friday during the 29th commencement of the College of Pharmacy & Health Sciences (3 p.m., Pope Convocation Center). The ceremony will be one of six over a three-day span, beginning with the School of Osteopathic Medicine’s event on Thursday. In all, more than 1,100 men and women will earn undergraduate or postgraduate degrees from Campbell this weekend.

The School of Nursing’s first commencement comes nearly two years after the program accepted its first group of juniors at the new Tracey F. Smith Hall of Nursing & Health Sciences in fall 2016. Unlike most majors within a university system, Campbell Nursing does not enroll students until they are juniors or have met all the program requirements and fulfilled all program prerequisites. Getting the general curriculum out of the way allows the students to focus on the rigorous nursing curriculum that involves patient care and clinical experiences during their junior and senior years.

According to Duffy, 46 students started the program back in 2016 — only one student left the program and another will graduate at a later date. She called Campbell Nursing’s first retention rate “remarkable.”

“It’s a testament to our faculty working with the students continually,” she said. “We had a volunteer, Dr. Pam Jenkins, who sat at a table in the back of our classrooms and helped students in their transition into nursing. And yes, she was a volunteer … not a paid employee. We were just so lucky to have her.”

Duffy also credited the team-based learning approach that she said encouraged her students to form a close-knit bond. She compared this first class to one giant family.

“Within our community or family, we saw that these connections facilitated engagement and motivation,” she said. “Students would say, ‘If they can do it, I can do it.’ Connecting with other students gives them a greater chance of being successful. And I loved having a smaller class, because you can’t always use this approach with a class of 245 students.”

According to Duffy, 100 percent of her graduates who actively sought nursing positions right after graduation have landed a job. Hospitals and agencies have worked with the school over the past two years to recruit students and promote their programs. Seniors this year also performed a 120-hour capstone practicum, where a number of them proved themselves worthy and were offered positions as a student.

Most valuable in their education, Duffy said, was learning the three things all nurses need: a brain, a mouth and a spinal cord. The brain to figure out what is happening to a patient, the mouth to speak for that patient and the spine to advocate for that student and see to it that their needs are always met.

“They didn’t know what this meant on the first day, but they get it now,” Duffy said. “We’re all about patient advocacy and clinical reasoning. And I’m satisfied that they understand this and are ready to integrate it into their practices.” 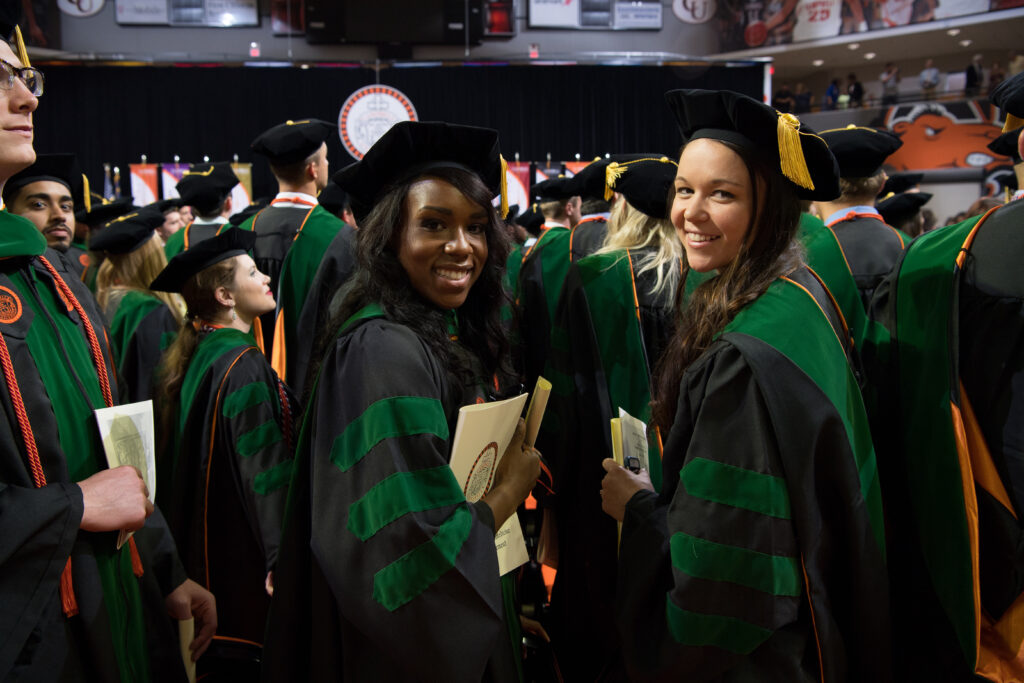 Of Note: This will be only the second graduation ceremony for Campbell’s new School of Osteopathic Medicine, and like last year, 100 percent of the graduating class has been placed into residencies. Of the class, more than 30 Campbell doctors will stay in North Carolin to practice, and 43 percent of the class will practice in the Southeast. Nearly 60 percent will practice in primary care.

Of Note: Because of Rosenstein’s appearance, C-SPAN will tape and later televise his commencement address. The remarks will air later as a part of C-SPAN’s annual commencement address package. The network is available in nearly 100 million cable and satellite households across the U.S. and online at c-span.org.

Speaker: Dr. Crystal Tillman is the director of education and practice for the North Carolina Board of Nursing in Raleigh. She has been with the Board since 2010. Before that, Tillman was a program chair and nursing educator for eight years in Charlotte, as well as a practicing pediatric nurse practitioner in a general pediatric practice for 11 years. Her current clinical practice includes practicing as a psychiatric and mental health nurse practitioner assisting clients with addiction and opioid use disorder.

Of Note: Tillman’s address is no coincidence, as the director of the state’s Board of Nursing will speak to a group that includes Campbell’s first nursing graduates. Friday’s graduates across all programs will be ready to work, too —81.5 percent of students and alumni from Campbell’s pharmacy program successfully matched with residencies this year. This rate compares favorably to the national match rate of 65 percent.

Speaker: The Rev. Julie Pennington-Russell became senior pastor of the First Baptist Church of the City of Washington, D.C.,  in 2016. Before that, she served and led three churches in Decatur, Georgia; Waco, Texas; and San Francisco. She earned her BA from the University of Central Florida in Orlando and her MDiv from Golden Gate Baptist Theological Seminary in Mill Valley, California. Her messages have been featured on TV’s 30 Good Minutes,  on Day-1 Radio and at the Festival of Homiletics. Currently, she is a trustee for Baptist Theological Seminary at Richmond; a member of the Faith-Based Advisory Committee for the D.C. Attorney General; and a board member for the D.C. Baptist Convention.

Of Note: Campbell Divinity began a new commencement tradition last year — each graduate selects a family member or friend related to the ministry to hand them their hood before the hooding ceremony.

Speaker: Dr. Richard E. Besser was named president and CEO of the Robert Wood Johnson Foundation in 2017. Under his leadership, the Foundation is maintaining its focus on building a comprehensive Culture of Health that provides everyone in America with the opportunity to live the healthiest life possible, regardless of finances, geographic location, race, ethnicity or physical challenges. Prior to assuming responsibilities as president and CEO of the Foundation, Besser was chief health and medical editor for ABC News. During his tenure, Besser provided medical analysis and reports for all ABC News programs and platforms. He traveled all over the United States and around the globe to cover major medical news stories. He walked the Ebola wards in Liberia in 2014, reporting from the center of the deadly epidemic.

Of Note: Campbell’s new Rural Philanthropic Analysis, launched in 2017, is supported in part by the Robert Wood Johnson Foundation. The aim of the RPA is to better understand rural places and funding practices that are leading the way towards health improvement in rural regions across the country.

Speaker: Bob De Contreras, managing partner for Research Triangle Business Advisers, has over 20 years of corporate experience working for International Business Machines. As owner of IBM’s worldwide products and services business in the brokerages, exchanges and trading industry, De Contreras managed a $400 million business that doubled each year under his leadership. In his last five years at IBM, he participated in the formation of 32 different start-up businesses, and he led two separate worldwide studies commissioned by Congress on the topics of the international financial markets and stock trading fairness between institutional and individual investors.

Of Note: Last year, 160 degrees were conferred to Adult and Online Education students representing the College of Arts & Sciences, School of Education and the Lundy-Fetterman School of Business.