RALEIGH — Campbell Law School Dean J. Rich Leonard is bringing quoits, and old game that is a mix of horseshoes and corn hole, to the law school.

Quoits (pronounced /kwoyts/), an antecedent of horseshoes, is a traditional game in which players pitch (throw) quoits (rings) aimed at a board with a spike, with the goal of encircling the spike or getting close.

Leonard intends to resurrect the tradition of quoits by supplying quoits and quoit boards for the law school community.

“Much of my fascination with Marshall comes not just from his legal brilliance, but from his remarkable humility, sociability and zest for life,” Leonard explained. “His absolute favorite pastime was playing quoits, an antecedent of horseshoes. Every Saturday when he was in Richmond, he was the leading member of the Quoits Club.  And when he came to Raleigh, he played with locals in the street outside the boarding house where he stayed, a couple of blocks from the law school.”

Leonard added that he hopes this time-honored tradition of quoits is one that will be enjoyed by the Campbell Law School community for years to come. 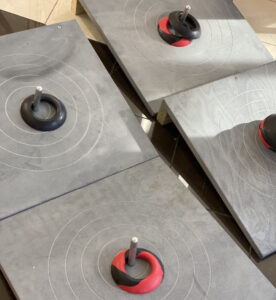 Slate-board quoits, specifically the type the law school uses pictured above, is a popular outdoor variation played principally in and around Pennsylvania, (specifically the “Slate Belt” which is in the Lehigh Valley), according to Wikipedia. This game uses two 1-pound rubber quoits per player, which are pitched at a short metal pin mounted on a heavy 24 inch × 24 inch × 1 inch slab of slate. The common pronunciation of quoits in the Slate Belt region is (qwaits).

Two to four players take turns throwing a quoit at the pin. The quoit nearest the pin gets one point. If one player has two quoits nearer the pin than either of his opponent’s quoits, he gets two points. A quoit that encircles the pin (called a ringer) gets three points. If all four quoits are ringers, the player who threw the last ringer gets three points only; otherwise, the first player to make 21 points wins the game.

Since its founding in 1976, Campbell Law has developed lawyers who possess moral conviction, social compassion, and professional competence, and who view the law as a calling to serve others. Among its accolades, the school has been recognized by the American Bar Association (ABA) as having the nation’s top Professionalism Program and by the American Academy of Trial Lawyers for having the nation’s best Trial Advocacy Program. Campbell Law boasts more than 4,500 alumni, who make their home in nearly all 50 states and beyond. In 2021, Campbell Law celebrated 45 years of graduating legal leaders and a dozen years of being located in a state-of-the-art facility in the heart of North Carolina’s Capital City.