From the School of Education

The award is presented annually during the School of Education’s Spring Convocation; however, due to the pandemic, this event was cancelled, and the award was presented to Dr. Godwin virtually last fall. 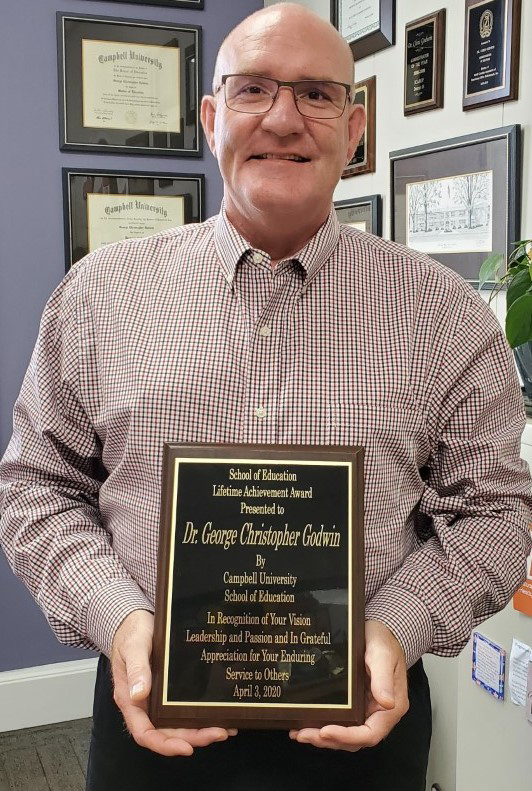 In 1984, Godwin earned a bachelor of science degree in intermediate education with a concentration in math and science with Summa Cum Laude distinction. He continued his education at Campbell and graduated in 1986 with a Master of Education and school administration certification. He began his teaching career in Harnett County Schools, serving as a middle grades teacher, assistant principal and academically/intellectually gifted coordinator. In 1990, Godwin was selected as the Harnett County Teacher of the Year. Also, within Harnett County, he coordinated the development of Harnett County’s Gifted Education Program which became one of nine model sites for improvement in gifted education under North Carolina’s statute for gifted education.

He left Harnett County Schools to pursue a doctorate in curriculum and instruction at North Carolina State University. Upon completion of his doctorate in 1998, Godwin joined the North Carolina Department of Public Instruction as the state director of academically/intellectually gifted programs and coordinator for teacher education. In 2000, Godwin returned to his home county of Johnston County to serve as middle schools coordinator and executive director of academic programs. He was awarded the Johnston County Administrator of the Year in 2008 and went on to receive the District 11 Regional Administrator of the Year that same year.

In 1986, Dr. Theo Strum, then the dean of the School of Education, invited Godwin to teach a science methods course for aspiring educators. Thus, began a long commitment from Godwin to Campbell University and future educators. He has taught nearly every semester since 1986 in the Professional Education department. In 2007,  Godwin served as the president of the Friends of the School of Education, where he is a lifetime member.

Godwin has applied a combination of practical and academic experiences to a variety of consultancies that span across North Carolina. His consultations include some of the following: “Differentiation in the Regular Classroom for All Learners,” “Engagement with the College Classroom,” “Reading Differentiation in the Content Areas,” “Responsiveness to Instruction and Gifted Education: “A Natural Fit,” “Getting to know your students in order to teach them” and “When Students Cannot Learn the Way We Teach Them, We Must Teach Them The Way They Learn! — Learning My Own Way!”

Godwin secured two 21st Century Community Learning Center grants to create after-school programs for at-risk students and in 2005, Dr. Godwin secured two national GEAR UP grant awards for the students of Johnston County. These grants were written in partnership with the Professional Education Department at Campbell University with a focus on first generation and non-traditional students seeking to attend college.

For those who know Godwin and have experienced his passion, kindness and true commitment; faith and family are the core of all that he represents. Godwin and his siblings are first generation college graduates thanks to the inspiration of  Godwin’s father and mother, George and Jean Godwin.

Godwin is recognized because of the passion and dedication that he has given to so many and to the many educators who have had the pleasure to work with him over these many years.