Louisa Taylor’s only regret about her four years as a student at Campbell University was she didn’t get to attend any football games. The 1989 graduate was, unfortunately, about 20 years too early, as Fighting Camel football didn’t return to campus until 2008.

But sports played a huge role in Taylor’s Campbell experience. Some of her fondest memories are the soccer, baseball and basketball games she attended. She lived in a century-old on-campus house her senior year a stone’s throw from Carter Gym. The house across the street hosted visiting athletic teams, and regularly, Taylor and her roommates would host cookouts for athletes from both sides.

“It was one big community,” Taylor recalls. “Living on campus and attending the games, it was all part of an amazing college experience.”

Today, Taylor is a familiar face at Campbell football games, and when presented the opportunity to give back to her alma mater and fill a need for the University’s athletics program, she jumped at the chance.

This spring, Campbell University will unveil the Louisa Alliene Taylor Football Locker Room at Barker-Lane Stadium. The state-of-the-art room — made possible by a naming gift from Louisa Taylor and Troy Lumber Company in Troy, North Carolina — will be constructed by Longhorn Lockers, who is responsible for locker rooms at several Top 25 FBS programs (such as LSU, Alabama, Georgia, Clemson  and Texas), as well as the Dallas Cowboys, Baltimore Ravens and a few NHL and MLS teams.

“This is such an honor for me, only because my father and brother [owners and Troy Lumber and both Campbell trustees] have worked so hard and built on the legacy my grandparents started at Campbell,” says Taylor, whose grandfather Fred L. Taylor is the namesake for the Taylor Hall of Religion in the main campus’ Academic Circle. “Being a part of this legacy means the world to me.”

When completed, the Louisa Alliene Taylor Football Locker Room will become a key recruiting tool for a Campbell football program coming off one of its most successful seasons since returning to Division I play in over 12 years ago. Campbell finished its COVID-shortened season 0-4, but all four games came against FBS opponents, and all four opponents would go on to qualify for bowl games in 2020. Three of the four  games were nationally televised, and Campbell’s tilt against Georgia Southern — a team that beat Louisiana Tech in the New Orleans Bowl, 28-3 this year — came down to the wire, with Campbell coming up short on a go-ahead two-point conversion attempt in the final seconds.

“The locker room is the centerpiece of any football program,” says head coach Mike Minter. “It’s our kids’ home during the football season. And for us to have the best locker room in the Big South and one of the best in all of the FCS, it shows where this program is going. It separates us from the rest. And I always want to be the one out in front, setting the tone.” 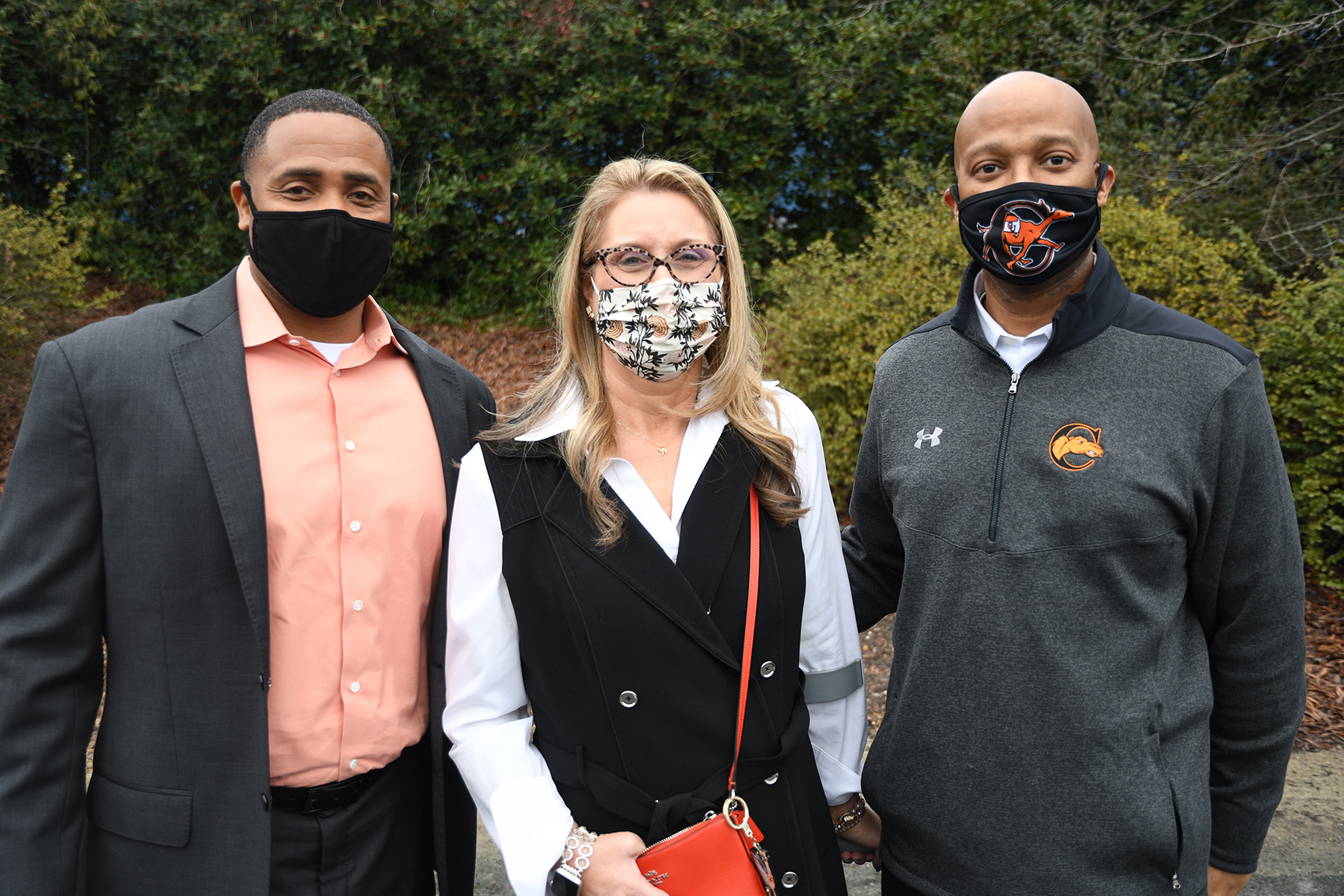 The timing of the announcement couldn’t be better for Campbell football, as Wednesday was the first day high school recruits could sign their national letters of intent to lock them into the school of their choice during this late signing period. Minter listed three things — aside from having a winning program — recruits are drawn to when visiting a school, and locker rooms topped the list (the other two were weight rooms and, surprisingly, uniforms).

“When they’ve narrowed their choices to just a few schools, the locker room and the stadium can be the deciding factor,” Minter says. “Now our locker rooms will fit the quality of our weight room, our stadium, our scoreboard, our uniforms. Not many FCS programs can compete with that. It speaks volumes to the support this program gets from its boosters and its alumni. They’re enthusiastic about where we’re at.”

During a gathering and check presentation at Troy Lumber Company on Jan. 27, the Taylor family presented the check to Minter, Athletics Director Omar Banks, Vice President for Advancement Britt Davis and President J. Bradley Creed. Louisa Taylor joked that she wanted a large portrait of herself in the locker to “motivate the players,” but said she’d settle for an object or a sign much like Clemson’s Howard’s Rock or Notre Dame’s “Play Like a Champion” sign.

“I’ll leave that decision to Coach Minter,” she says. “It’s his space.”