Jack Britt, a longtime educator and former superintendent of Cumberland County Schools and for 27 years a valued member of Campbell University’s advancement office, died Friday at Cape Fear Valley Hospital after a brief illness. He was 86.

Nationally recognized for his leadership in public school education and an inductee into the East Carolina University Educators Hall of Fame, Britt’s biggest honor came in 2000 when the Cumberland County School system dedicated its newest school, Jack Britt High School, in his name. 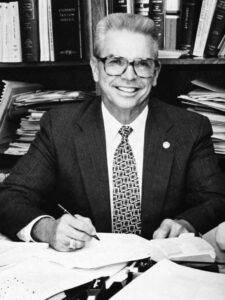 “Jack Britt has left tracks of his feet and touches of his big heart at Campbell University,” former Campbell President and current Chancellor Jerry Wallace said. “His commitment, love and concern for all people he met, his energy and his ‘never quit’ spirit will live on in the buildings he helped build and in the hearts of all who knew him. I loved Jack Britt.”

“He was one of the hardest working public servants you would ever know,” added Jerry Wood, associate vice president for institutional advancement and planned giving at Campbell who worked with Britt for over 45 years. “He was a tough man and a good man. He was like a brother to me.”

A native of Fairmont, North Carolina, Britt attended Fairmont High School, where he was a guard on the basketball team, a catcher on the baseball team and a halfback for the football team. His talent on the gridiron earned him a full scholarship at East Carolina University, where he was a running back and became co-captain during his senior year. 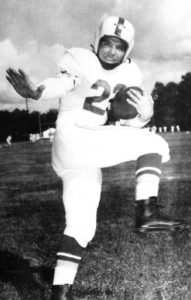 Britt began his career in education as a teacher and coach with the Raleigh City Schools and served in the U.S. Army before he began teaching at Seventy-First High School. He went on to serve the Cumberland County School System for 34 years, as a supervisor, assistant superintendent, deputy superintendent and as Superintendent from 1980-1989.

Just months after retiring from Cumberland County Schools, Britt joined Campbell University as director of corporate relations. He soon earned the title of North Carolina Baptist Fundraiser of the Year and was later named vice president for institutional advancement. In 2011, he was named senior vice president for advancement and assistant to the president.

He continued to be a valued member of the advancement team at Campbell until February, when he stepped down on his 86th birthday.

“This is not just a job, it’s a calling,” Britt said of his time at Campbell in 2011. “The most rewarding part of my role here is meeting and working with such good friends. They like being associated with Campbell and they support Campbell because it stands for something and they want to see it succeed.”

Britt Davis, who succeeded Jack Britt as vice president for institutional advancement in 2011, called filling his role at Campbell “one of the greatest professional honors and challenges I faced in my work at Campbell.”

“Jack was truly a legend at Campbell and across North Carolina,” Davis said, “but he was an incredible mentor to me who gave wise counsel, advice and, most importantly, friendship.”

During his career, Britt served on the National Association of Federally Impacted Schools Board of Directors, as well as in three entities of the State Department of Public Instruction.

More about his career in Cumberland County can be found in the Fayetteville Observer’s story on his passing.

“Jack Britt was beloved by many in the Campbell family,” said Campbell President J. Bradley Creed. “His role in supporting the education of young men and women at Campbell — and prior to that, Cumberland County Schools — cannot be overstated.” 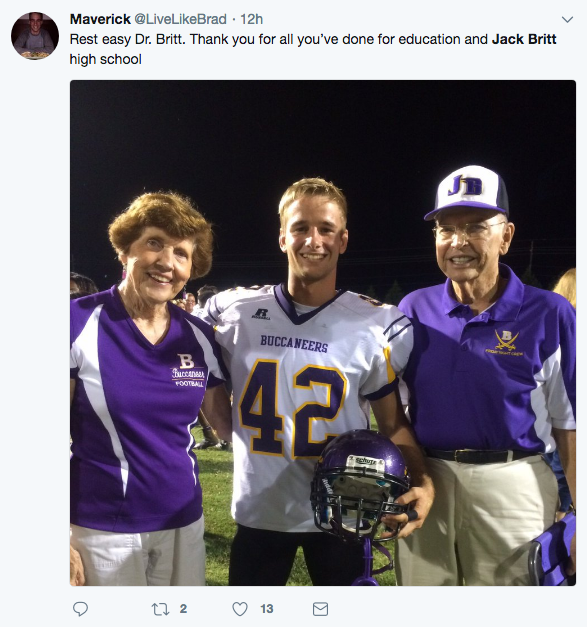 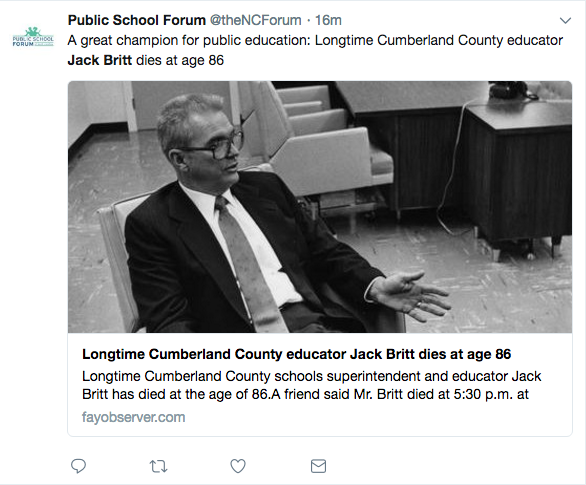 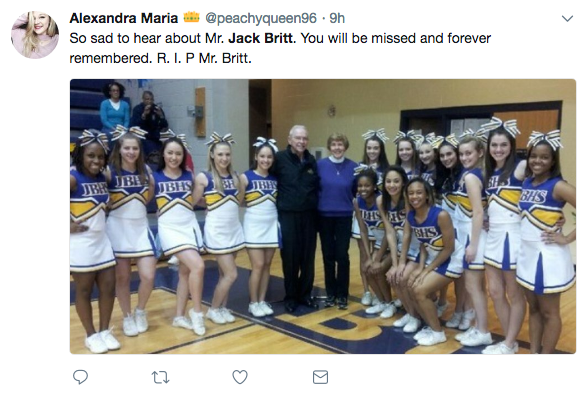