Tells students: ‘Leave the world better than you found it.’

He began by highlighting a key similarity between Campbell and Syracuse University, where he’s currently a professor — citizenship. This “dedication to citizenship and civic engagement” would be a recurring theme of his speech; O’Keefe referred to citizenship as “a critical element of keeping democracies alive.” He highlighted a long history of public servants among Campbell’s alumni, including congressmen, judges and public commentators. 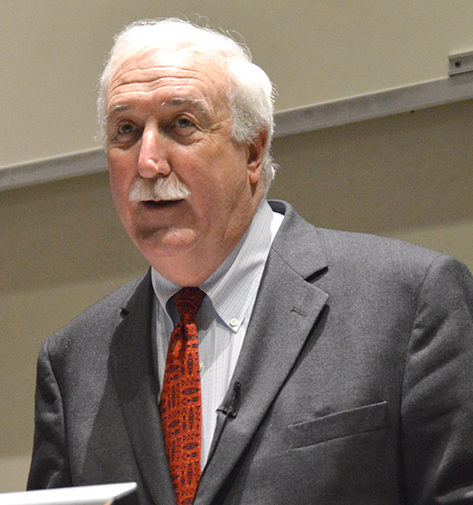 The most significant aspect of O’Keefe’s speech was a broadened scope of what public service entails. While it has become synonymous with government positions, public service shouldn’t be so narrowly defined, he said. In fact, public service rests not upon an office or job posting, but rather on a simple maxim: a desire to leave the world “better than the way you found it.”

Predicated on this notion, O’Keefe sought to instill in the Campbell students and faculty assembled that night a realization that this simple desire, combined with knowing (in the style of the Jesuits who educated him at Loyola University), not just what you think, but why “you think the way you think, as opposed to frivolously reacting,” and grounding oneself in a set of fundamental values and principles.

He emphasized that one need not embrace his specific viewpoints (so-called “establishment” Republicanism); public service is a “common…dimension” across all “partisan persuasions,” across any “range of values.”

O’Keefe said he felt Campbell exemplified a strong commitment to service and principles. Citing the University’s founding mission of ensuring that no student would be denied admission based on inability to pay, he brought high praise (in the fashion of academics) from other colleagues who had come to acquaint themselves with Campbell.

“[They] describe Campbell to me; and this is in the language that faculty really like to use; an academic institution which embraces diversity of thought, tolerance of views, and rich in its appreciation of community values,” he said.

O’Keefe brought an extensive pedigree to the event, eminently qualifying him to speak on the topic of public service: beginning his career in the Senate, he spent time as the comptroller of the Defense Department, secretary of the Navy, deputy director of the Office of Management and Budget and even the administrator of NASA (a post which earned him the rare distinction of having an asteroid named in his honor). In his family tree resides an even deeper connection to public service. O’Keefe’s father, Patrick, spent a career in the U.S. Navy, while his great-grandfather, Arthur, was mayor of New Orleans.

He said he hoped Campbell students found his talk“thought-provoking” and something that “will help at least in small measure, [and] motivate you to think the way you think and arrive at whatever conclusion that naturally leads you to.”

“In that course,” he added, “think about the value of public service that you can perceive; that in turn is all about doing so for no other benefit than leaving the condition better than you found it.”

For the past nine years, SGA and PAC have coordinated an annual presentation by scholars from leading universities across the country, including American University, Georgetown University, Syracuse University, the University of Vermont, Wagner College, Wake Forest University and Wheaton College. These lectures have been well-received by students, faculty and community members.

Past speakers have included: