“It didn’t take long for me to accept this invitation to speak at commencement,” said Lee, president of Tunku Abdul Rahman University College, Campbell’s partner school in Malaysia. “And that’s because President Creed, Provost Hammond, and other university officials have so often traveled to visit TAR UC. Campbell’s partnership has been invaluable as we strive to build up our university.”

Lee addressed more than 700 students in caps and gowns at the last of six total ceremonies hosted by Campbell over a three-day span. This ceremony was the largest of the six, featuring the majority of Campbell undergraduates from the College of Arts & Sciences, as well as graduates from the School of Education and the Lundy-Fetterman School of Business.

In all, 1,298 Camels earned their degrees this weekend. Lee encouraged every one of them to visit their sister school in Malaysia if they ever had the chance.

“We would welcome you wholeheartedly” he said. “I hope that you might find the travels you take in life as enlightening as I have found mine. May you acheive great success as you step into the world making a difference to the people around you.”

The commencement address was bookmarked by an exchange of honors between the President Lee and Campbell University President J. Bradley Creed. Lee was presented with an honorary degree for his excellent leadership, and in return presented President Creed with an award of thanks for his continued support of TAR UC’s collaboration with Campbell. 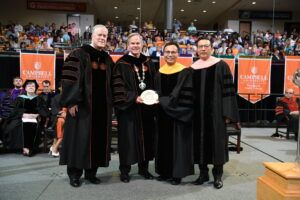 Lee shared with a packed Pope Convocation Center the story of TAR UC’s rise from humble beginnings. When it was first founded fifty years ago, there were only a handful of local institutions in Malaysia, he said.

“The early years were challenging as resources were scarce. It took patience and dedication to grow and expand, but today we have six campuses across Malaysia and have produced more than 200,000 graduates.”

It’s possible that today was the first time many of the Campbell graduates had heard of Campbell’s partnership with TAR UC, distracted as they were with Campbell’s own growth over the past four years. The Class of 2019 were freshmen in 2015 and attended Campbell during a period of unprecedented development. Students witnessed Campbell’s first class of nursing students graduate, watched a new engineering program come to life, seen new buildings (a new admissions building, improvements to athletic facilities, the beginnings of a new student union) and celebrated the inauguration of just the fifth president in Campbell’s long history.

Perhaps the most memorable moment from the commencement ceremony was the standing ovation that soprano Ashley Janae Elliott, a music performance graduate, received following a passionate performance of “I’m Here,” from the Broadway production “The Color Purple.”

“I believe I have inside of me everything that I need to live a bountiful life,” Elliott sang. “I’ll stand as tall as the tallest tree.”

“This is a place where we learn not only how to read well, write well and research well, but we learn how to be people who will make useful contributions to the society we are about to enter. It’s such a humbling experience to know that I’m part of a school that values servant leadership.” — Caroline Wilson, ’19

“I’m thankful for the support, the pick me ups, the never give ups that I have received from those pictured and many more! It’s been a long eight years to become Dr. Avery Belton, PharmD, MS, BS. I am so thankful for the friendships and relationships that I have made up to this point. It’s an exciting time but also bittersweet.” — Avery Belton, ‘19