When it was his turn to take the podium at Wednesday’s groundbreaking ceremony for Campbell University’s new student union, Vice President for Business Jim Roberts asked the crowd of 300-plus to take out their programs and turn to the centerfold.

The image before them — a computer rendering of the two-story, 110,000-square-foot facility and its large glass windows, the inside lit up against a darkened evening sky — provided a view of what this building will look like from the very spot the crowd sat in at the center of the Academic Circle. 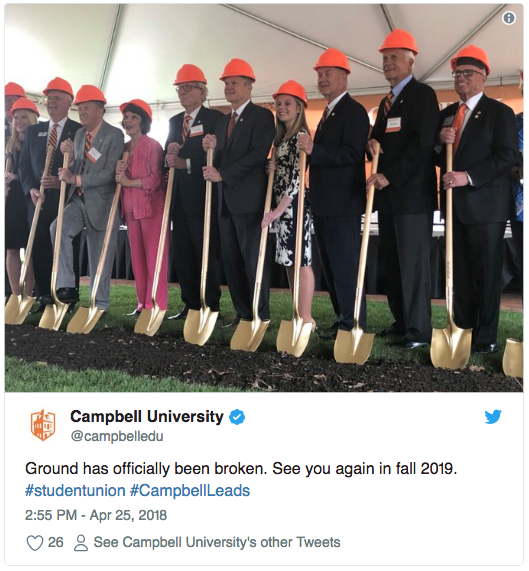 Campbell administration, trustees, alumni, faculty and staff joined with the group this building has been designed for — the students — for the event marking the ceremonial beginning of construction for the new facility, though construction unofficially began back in January with the destruction of Baldwin and Kitchin halls. Once completed, the student union will become a “transformative” addition to the campus, providing a much-needed center of activity for the Campbell community.

The building’s many possibilities and uses proved to be the theme of Wednesday’s ceremony. During his time at the podium, Roberts led his audience on a mental walk-through of the building, starting with the new cafeteria on the first floor (Gaylord’s Kitchen, as named by the students) as well as other dining options, a new Campbell apparel and spirit shop, student offices and the first floor of a new two-story fitness center. He then led them up the stairs — an LED-lit stairwell that will change colors for special events (like orange for a Campbell win in sports) — and into the large conference hall and ballroom, more areas where students can meet or study and a 200-seat movie theater.

When completed, the student union will be larger than the convocation center, which turns 10 this year. This fact alone has become a selling point for Assistant Vice President for Admissions Jason Hall, one of 10 speakers on the hour-long program Wednesday.

“When I talk to prospective students about this building, it’s hard to relay to them just how massive this will be — something you don’t see by looking at dirt or a few renderings in a magazine,” said Hall. “That’s why today is so very special. It marks a beginning. Soon, a foundation will form, and a skeleton will rise to outline the progress. When I tell them this will be larger than the convocation center, I’m usually met with raised eyebrows, a smile and maybe the occasional ‘whoa.’”

The buzz of saws and the beeps of forklifts in the distance served as an audio backdrop for the ceremony, as construction moves forward on the student union’s neighbor, the Bernard F. McLeod Sr. Admissions & Financial Aid Center, set to open this summer. Those sounds occasionally drowned out the speakers Wednesday, but they were sweet sounds, according to Hall.

“Dust equals growth,” he said. “Students should want to come to a university where growth is happening. I know chain-linked fences aren’t attractive, but they signify change.”

Hall echoed an earlier statement by Vice President of Student Life Dennis Bazemore, who said the student union is not only vital for improving student life on campus, but vital if Campbell is to attract top students in a competitive field.

“We join the good company of many universities across this country who have recently completed a student union, are currently constructing a student union or have made plans to build one in the near future,” Bazemore said. “These universities all over the country are seeing the need and the importance of having a modern state-of-the-art facility for students, faculty and staff. I’m convinced by what I read about other student unions that our students will spend time in this facility and will grow intellectually, develop leadership skills, clarify important values for life, develop meaningful interpersonal relationships and learn the art of collaboration with other students. It will help students become more involved and more engaged by providing an opportunity for personal and academic development through integrative services and programs.”

The student union will be roughly 10 times the size of Campbell’s existing Wallace Student Center, built in 1978. The facility is the focal point of the Campbell Leads fundraising campaign, which allotted $35 million for its construction. Raising funds for the student union has been a priority for President J. Bradley Creed since his first day at Campbell — a fact that he recalled on Wednesday.

“When I left [my first job interview with Campbell in 2014], I wasn’t sure I’d be the next president, but I was certain the next president of Campbell would be charged with the process of constructing a new student union,” said Creed, who then thanked the hiring committee who chose him. “The only credit I can claim here is that they handed me the baton and the hat and made me the drum major. My job has been to look good as I’ve marched this down the street.

“This building,” he added, “will make a huge difference in the life and history of this campus.”

“The new student union at Campbell University will be an incredible addition to campus life and the landscape. Our alumni and friends have stepped up in remarkable ways to support this historic project, and we’re excited to reach our fundraising goal of $35 million by the time it opens in fall 2019.”
— Britt Davis, vice president for institutional advancement

“This student union is designed to create an environment to promote quality student life where lifelong friendships with classmates will be created. Some of these friends may turn out to be spouses, political and business associates and social friends who may support you in times of difficulty and be with you to share your successes.”
— Tom Keith (’64) chairman, Campbell Board of Trustees

“The Campbell family is made up of not just of university people, but it’s also the people of Harnett County, the state of North Carolina, the country and the world. My greatest prayer is that God will bless this new facility and continue to bless Campbell.”
— Gordon Springle (’71), Harnett County Board of Commissioners

“A student union is often called the front door or the living room of a campus, it is designed to be the center or the hub of activities. The place to meet. The place for student involvement. The place to eat. The place for group events, clubs and organizations to hold their meetings. A place just to gather. A place to enjoy being together. To exercise, to play board games, to watch a movie, to hold a special event, and I could go on and on. This facility has been needed at Campbell for a long time.”
— Dennis Bazemore (’77), vice president of student life

“This significance of this building will go well beyond brick and mortar. This will become the central location for many traditions from which Campbell students will pride themselves.”
— Senior Katie Bradley, SGA President

“The student union will provide an escape from hustle and bustle of everyday life. It’ll be a place of community and belonging. A place to just be. It will be an extension of our residence halls and our classrooms and a place where physical well-being can be enhanced. This facility is the missing piece that will complete our campus puzzle.”
— Jason Hall (’98), assistant vice president for admissions

Another historic day @campbelledu so very proud to break ground on a new state of the art student union! Thanks to the board of trustees, our students, our supporters for making today possible! View from the stage! #leadingwithpurpose pic.twitter.com/Ibi18Nk69p

Congratulations @campbelledu on breaking ground today for the new Student Union! What an amazing ceremony! Your warm invitation made our day! Thank you and congratulations!

The ground has officially been broken for the new Student Union at @campbelledu! ???

Your first look at the new student center coming to main campus. ? https://t.co/dyBtmwKTru

Got a good look at the site of @campbelledu future Student Union today! Former location of Baldwin and Kitchin on Leslie Campbell Ave! Join us for Student Union groundbreaking on April 25 @ 2pm on Academic Circle! #LeadingWithPurpose pic.twitter.com/KxISmIkFoU

Today is a dream come true!!! My heart is overjoyed for this building that will change student lives forever! @CampbellAlumni @campbelledu ❤️? #LeadingWithPurpose pic.twitter.com/u2HopIwalI

Often we are asked if medical students will be able to use the new facility, and the answer is YES! Read more about the student union: https://t.co/RNizEkpcY5

Katie Bradley, Doctor of Physical Therapy Student and Student Body President will be taking over our Snapchat tomorrow to show you some neat things Student Government has done on campus! Follow futurecamels!

The groundbreaking ceremony for Campbell's new student union is April 25, and imagining this view has got us pretty excited about it.

Your generosity has inspired others. Campbell alumnus and chairman of the University's Board of Trustees Tom Keith ('64) says he will donate another $50,000 toward our new student union if we reach 1,000 donors by the end of the day. As of this post, we are about 400 gifts away. Help us make this the biggest #CampbellGivingDay ever by making a donation — whatever the amount. Thank you! TO GIVE: http://bit.ly/CampbellGivingDay18