Campbell’s long-awaited, much-anticipated student union will take its first step toward becoming a reality on April 25, when University administration breaks ground on the 100,000-square-foot multi-purpose hub.

Once completed, the building will be a center of activity for the main campus and Campbell community, giving students the opportunity to hone their social and leadership skills. It will serve as a gathering place for students, faculty, staff and community members to study, eat, be in fellowship and get involved.

Speakers at the 2 p.m. groundbreaking ceremony will include members of the University cabinet and Vice President of Admissions Jason Hall. Refreshments and shaded seating will be available in the center of Academic Circle, where the new student union will eventually overlook. Estimated to be in full use by fall 2019, the union will feature a lighted glass tower and a facade made almost entirely of glass, allowing students to enjoy a scenic view of campus and the iconic Kivett Hall.

Inside, the facility will be designed to promote community. By offering spaces where students can eat, shop, plan projects, play games and watch sports and movies together, the student union will get students out of their dorm rooms and involved on campus. Part-time and commuting students will also have more options for places to study and relax between classes.

The student union will also focus on health and wellness with amenities to help students develop healthy lifestyles. Locker rooms, free weights and weight machines will round out a two-story fitness facility. With spaces for group fitness classes and intramural sports, the new design doubles the area of the current fitness center. Outside the fitness center will be fresh dining options, including a juice bar and produce stand to fuel students’ study sessions and routines.

“The great thing about this facility is it incorporates everything we have now for student services, plus new residential dining, a two-story fitness center, and a banquet hall.” said Jim Roberts, Campbell’s vice president for business and treasurer. “All of the spaces that we use for student activities right now, like the convocation center, will be opened up for better use, while students will have everything they need in one central location. This is going to allow the community to expand all across campus. ”

The new student union will be roughly 10-times the size of the existing Wallace Student Center, which takes up 1 percent of total campus space (the national standard for student unions is 12 percent of total campus space). Built in 1978, the current student center designates only 2,884 square feet for student dining, studying and socializing — that’s barely one square floor tile per student. With 100,000 square feet, the new building will be a much-needed addition that provides students with room to grow.

In addition to dining and fitness facilities, offices and meeting spaces for student organizations, and study areas, the student union will also house a movie theater — the only theater in Harnett County.

The student union will be the focal point of the Campbell Leads fundraising campaign, which allotted $35 million for its construction. Raising funds for the student union has been a priority for President J. Bradley Creed since his first day at Campbell.

“The support among the University trustees, alumni and student body for a new and much needed student union was apparent to me from the very first time I met with the presidential search committee in late 2014,” said Creed. “Campbell is a world class institution that is strategically  located between thriving metropolitan areas and rural communities that are growing in size and influence. We work to educate our students in Christian liberal arts tradition to lead lives of meaningful service to others. A new state of the art student union will help make our already close-knit community feel even more like home and family.”

1: The 200-plus seat movie theater inside the new student union will become the first and only movie theater in Harnett County. Currently, Campbell students have to drive 20 to 25 miles for theaters in Apex or Garner.

2: The student union will be one of two new buildings coming to the Academic Circle in the next few years. Before it, a new admissions building (currently under construction) will sit between the union and Butler Chapel. Like the union, the admissions building will have glass walls providing prospective students a scenic view of the campus and the iconic Kivett Hall.

850: The banquet hall on the second floor of the new facility will seat up to 850 people for formal events, conferences, academic gatherings and more. The hall can be split into smaller rooms with partitions and will feature a catering kitchen. The entire second floor will have higher ceilings and glass walls to allow in more natural light.

100,000: The 100,000 square feet of space provided by the student union will be a tremendous upgrade from the current 11,000-square-foot Wallace Student Center built in 1978. In addition to dining, fitness, merchandising and social areas for students, the facility will provide much-needed office and meeting space for Student Life, Greek Life and other student organizations, such as the Campbell Times newspaper and Pine Burr yearbook. Several rooms and areas will be designated study areas as well. 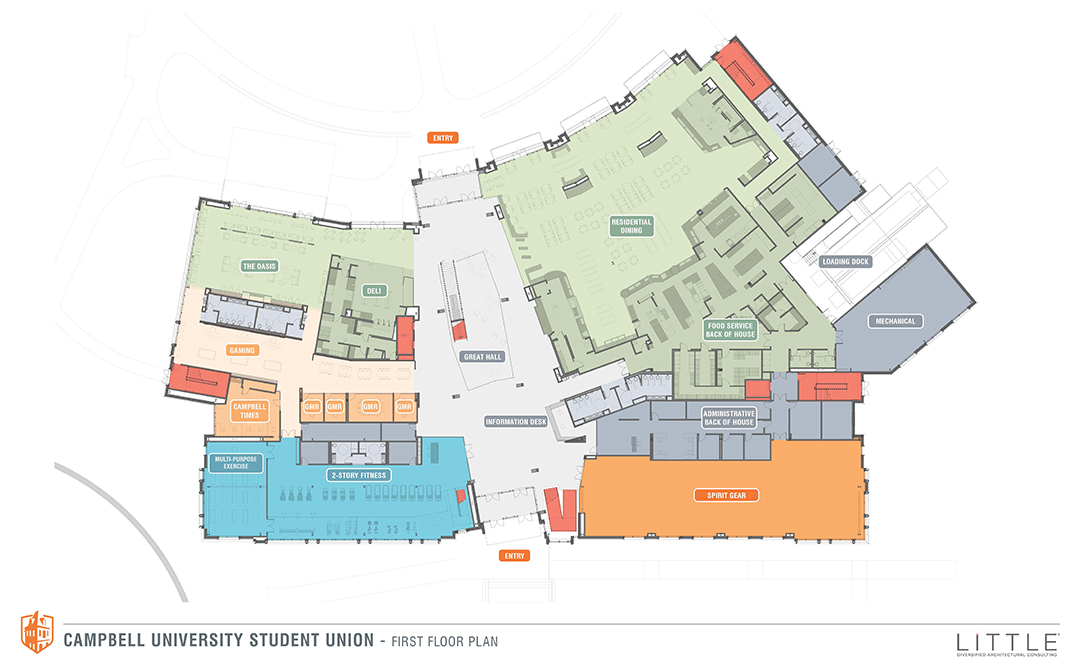 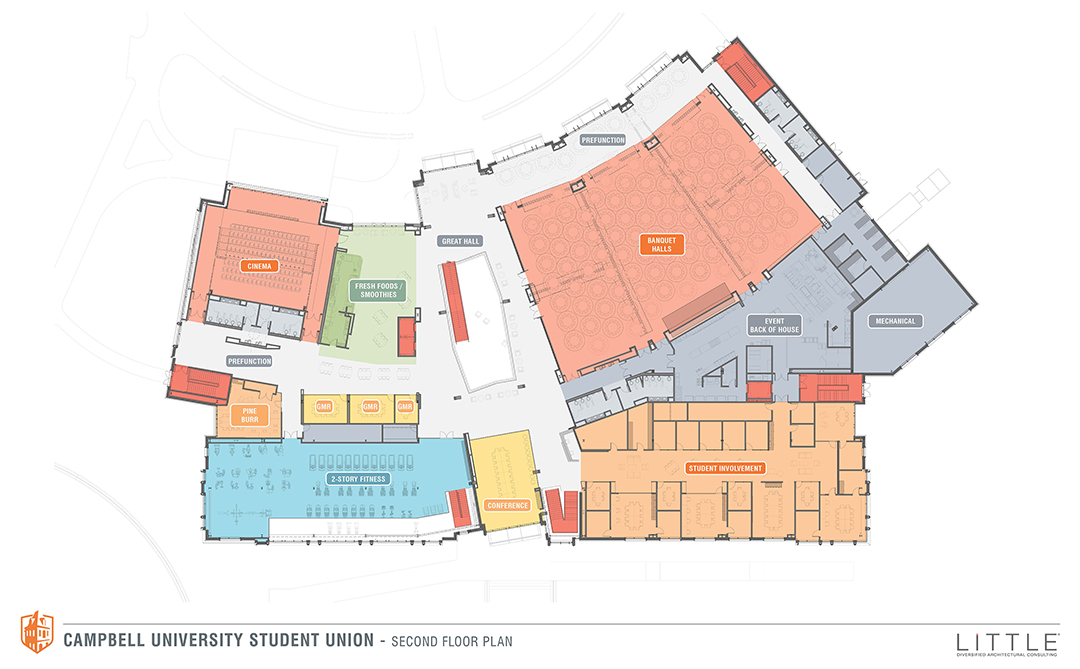 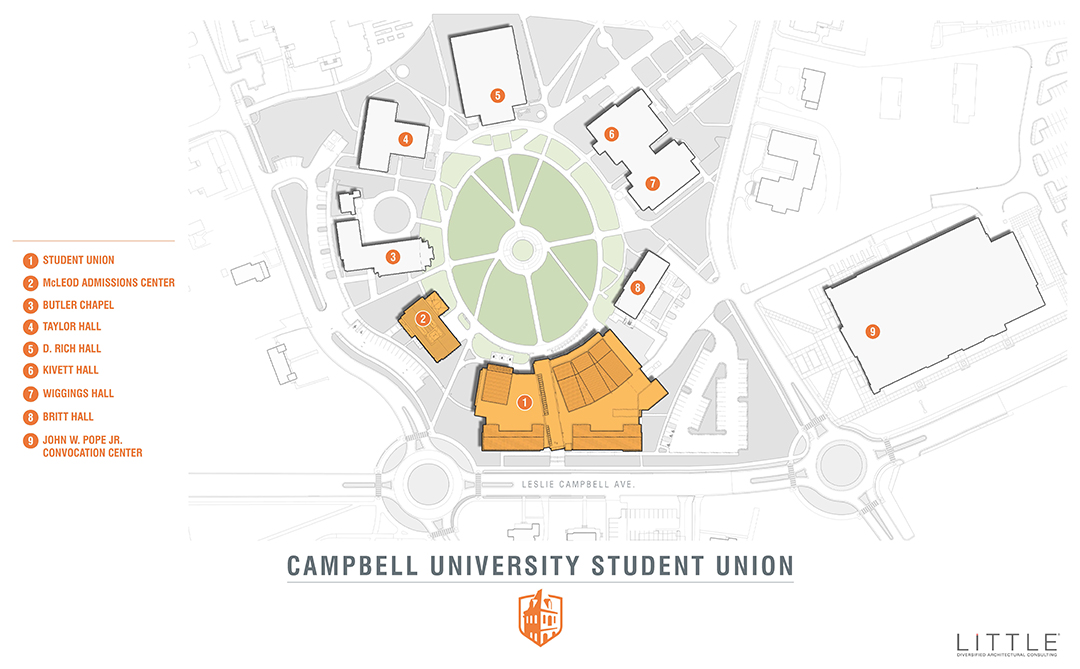