Anne Alphin and David Hobson met on Easter Sunday, 1950, in their Sunday school class at Long Branch Church in Dunn, North Carolina. Anne was 7, and David was 6 — and from the beginning, their friendship was strong.

Eight years later, the two worked together at Dunn High School to produce the school’s daily morning devotional, which included hymns — their favorite was “The Holy City,” a hymn that remained an important piece of music through high school and their nearly 37 years of marriage, up to Anne’s death in 2012.

When Campbell University celebrates the opening of the Hobson Performance Center with an inaugural gala and wind symphony performance on Nov. 14, it will also be a celebration of the love of music David and Anne Hobson shared from the day they met. Featuring music by Jack Stamp — an internationally known composer and former director of bands at Campbell University — the gala will include a new arrangement of “The Holy City,” written and performed in honor of Anne Hobson.

It’s a moment that brings David Hobson to tears even thinking about it.

“It’s going to be very emotional for me,” says Hobson, who created the David C. Hobson Christian Music Gift Fund to not only renovate the existing auditorium in Campbell’s D. Rich Building, but also promote Christian music. “This performance center honors her memory and is the result of a project the two of us designed together before her death. She was really enthusiastic about a project that would promote the performance of Christian music. This fulfills her dream, and I hope it’s a facility that serves the University and the public for a long, long time.”

The Hobson Performance Center is the result of months of construction inside D. Rich — the previous auditorium was practically gutted so improvements could be made to the stage, the acoustics, the decor and the balcony level. According to Executive Vice President John Roberson, the space — built in 1927 — was not acoustically suitable for vocal or instrumental performances.

“By removing the proscenium wall and installing an acoustical shell, the space was transformed into an acoustically tuned space and thereby an exceptional performance venue,” Roberson says.

“Scott Hall [in the Taylor Bott Rogers Fine Arts Building] currently seats 408, and our typical band concert brings in about 700 people,” Wilson says. “There are 994 seats here [in Hobson], and the sound is better and not as ‘boomy’ as Scott. The shell is a vast improvement — the room is big enough, and the ambient sound should be great.”

Roberson says the increased seating capacity will negate the demand for multiple performances and allow the University to invite and encourage greater community attendance at events.

“By way of these instruments, the University will be able to host higher quality performances in the space,” he says. “A larger stage, along with a greater seating capacity, will also allow Campbell to host larger instrumental groups — for example, the North Carolina Symphony.” 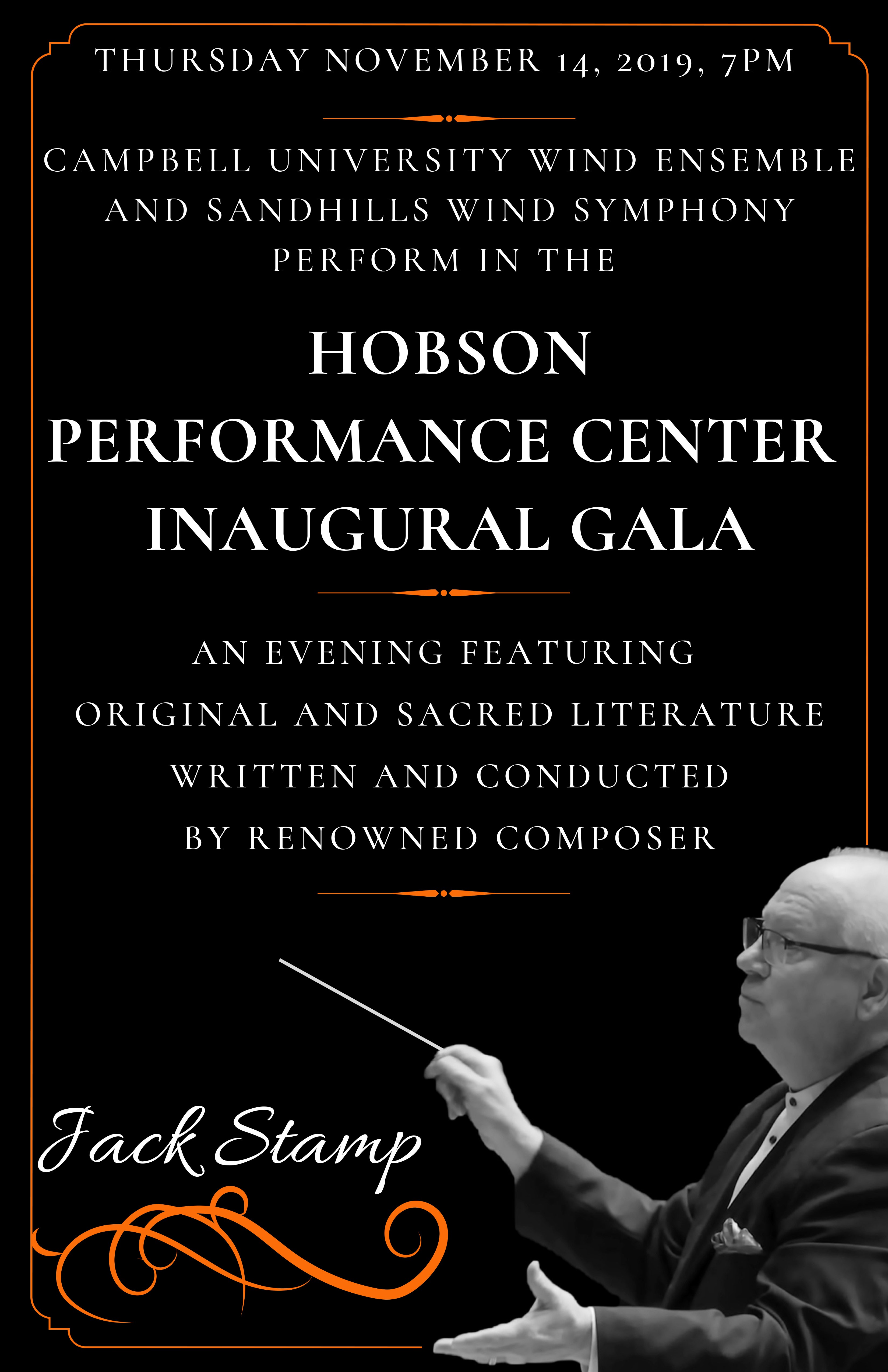 The Nov. 14 gala will honor the past and future of music at Campbell University.

Jack Stamp is an internationally known wind ensemble conductor and composer with numerous compositions to his name. Stamp’s career took him to Campbell in the 1980s, as well as Duke University and the Triangle British Brass Band. He served as director of band studies at Indiana University of Pennsylvania for 25 years.

“Dr. Stamp’s career was basically launched here,” Roberson says. “Within and outside the academy, he has gained world-wide recognition as both a conductor and a composer. It is an honor to have him coming as an arranger/composer of the dedication anthem and as the evening’s guest conductor.”

During Stamp’s time at Campbell, he helped oversee construction of the Fine Arts Building and wrote a piece, “The Spirit of Buies Creek” to honor his time here. According to Wilson, Stamp will conduct two numbers with the Campbell University Wind Ensemble and four numbers with the Sandhills Wind Symphony. Nearly three-fourths of the music performed that night will be Stamp’s own music.

“And, of course, they will perform ‘The Holy City,’ but also a piece by Jack about a passing of a relative — it will be in memory of Mrs. Hobson. It should be quite an effective piece,” Wilson says.

Note: The Hobsons will be featured in the upcoming Spring 2020 edition of Campbell Magazine