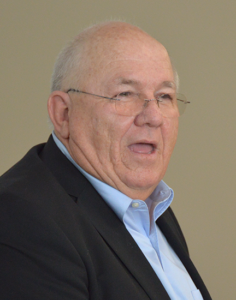 As one of the winningest collegiate golf coaches in NCAA history, John Crooks is used to the accolades and banquets that come with leading a winning program for 28 years.

But the patriarch of Campbell’s men’s and women’s golf success was brought to tears on Wednesday when the banquet focused on the hard work and generosity of his wife of 48 years, Susan Davis Crooks. The two were honored at a luncheon at Marshbanks Hall’s Alumni Room — their family and members of the golf team and Campbell administration on hand — for establishing the John and Susan Crooks Golf Endowed Scholarship Fund, a gift that will benefit generations of golfers long after the coach decides to hang up his clubs.

Pausing at times to find the right words, an emotional John Crooks thanked Campbell University from the podium at Wednesday’s luncheon for recognizing his wife, a 1989 graduate of Campbell Law School.

“I thank you because I work at a great place — one that will take the time to recognize the great work my wife has done,” Crooks said. “She makes so many sacrifices so I can do what I love. She works tirelessly. She’s frugal. She’s there for me. And she deserves everything we can do or say for her.”

The coach shared a story of his induction into the National Golf Coaches Association Hall of Fame in 2006 and the ceremony held in Lake Tahoe, Nevada, that year. That banquet came five weeks after a major surgery Susan endured while battling kidney cancer. Her doctors said she could travel again six weeks after the surgery, but for this event, she made an exception. While in the elevator heading down toward the banquet that evening, she told her husband that the speech he had prepared was boring and full of names people in this audience wouldn’t know. So she suggested he instead talk about his time at Campbell and share stories like the fact that he missed out on several tournament wins early in his career because Campbell wouldn’t let its teams play on Sundays (usually the final day of a golf tournament).

“And so I did that. And evidently, the speech was a hit. At least they let me stay in the [Hall of Fame],” Crooks recalled. “She came and saved the day for me.”

Susan Crooks recently retired from Womble Carlyle Sandridge & Rice where she was a partner, concentrating her practice in the area of civil litigation, with a special interest in medically related litigation. She practiced for 10 years as a registered nurse prior to attending law school and developed significant expertise in the legal defenses of cases involving complex medical issues, individual and class action suits, medical monitoring, medical malpractice and medical products litigation.

John Crooks, a native of Winston-Salem, played college golf at the University of Houston under legendary coach Dave Williams. He is a former United States Golf Association Junior Amateur Champion who has competed in major state and national amateur championships.

During his tenure at Campbell, Crooks has led the women’s team to 14 conference titles and 20 NCAA Regional appearances. His women’s teams have earned regional berths 17 times in the last 20 years. His 2017 women’s team won its 14th conference title and collected the Big South’s automatic berth to the NCAA Albuquerque Regional.

Campbell was one of 47 schools nationwide to earn team bids to both the men’s and women’s NCAA regionals in 2016. It was the first time that the Campbell men’s and women’s teams reached post-season competition in the same year under his guidance.

In 26 years as coach of the Campbell women, Crooks’ teams have finished either first (14) or second (10) in their league championship 24 times. Since joining the Campbell staff in 1990, Crooks’ men’s teams have claimed 51 team titles, and his women have won 81 tournaments.

He is currently in the No. 3 spot among NCAA Division I Women’s Golf all-time tournament coaching victories.

A short video was played during Wednesday’s luncheon where Crooks was asked what he enjoyed most about coaching. His answer was simple: “Getting in the van after a big win.”

“You spend all that time pushing them and asking your players to do their best — and sometimes they have to make great sacrifices to do that — then all of the sudden, they realize the effort they put into it was worth it,” Crooks said. “They laugh and smile, and you can physically see their confidence rise. So being in the van when that’s happening — lot of laughing, joking and giggling and talking about next win — that’s one of the reasons I coach.”