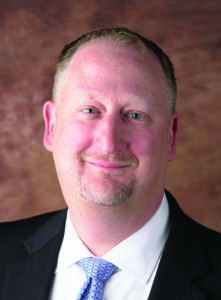 Kessler was associate dean of clinical affairs for the medical school in 2011, two years before it opened its doors to students in 2013, and has spent the past five years as the vice president, dean and chief academic officer for Lincoln Memorial University’s DeBusk College of Osteopathic Medicine in Tennessee. Kessler will be Campbell’s second medical school dean in its eight-year history. Dr. John Kauffman served until 2019, and Dr. Jim Powers has served as interim dean for the last two years.

Kessler said returning to Campbell is like coming home.

“It’s as if I never left,” he said. “It’s very similar to when you grow up, move away and return to your childhood home — the houses in your neighborhood might look different, and the shrubbery and landscaping might not be the same, but there’s still that warmth and familiarity. I may have left Campbell ­in body, but never in mind and spirit.”

Kessler was instrumental in launching the med school in 2013 and guiding it through its first three years. The school’s inaugural class earned their doctor of osteopathic medicine degrees in 2017, and many of them have, very recently, wrapped up their residency programs and have begun practicing in their respective fields (many in rural regions of North Carolina and the Southeast).

At Lincoln Memorial, he helped launch a branch campus in Knoxville, Tennessee, as vice president and dean, and he helped develop the school’s occupational therapy and physical therapy programs and expand its physician assistant program.

Prior to Campbell, Kessler was chief academic officer and director of medical education at Cleveland Clinic South Pointe Hospital in Ohio and the osteopathic family medicine residency director for the University Hospitals Health System in Richmond Heights Ohio.

Kessler’s experience — along with his familiarity with Campbell and its mission and his overall personality and leadership qualities — made him the perfect choice to lead Campbell’s med school into its second decade, according to Hammond.

“He’s left his indelible fingerprints all over our medical school’s policies, its culture and even its connections with hospitals in our region,” Hammond said. “He is someone who understands Campbell’s mission and exemplifies it.”

Hammond also touted Kessler’s experience in family medicine, one of the key focuses at Campbell.

“The med school’s mission is to educate medical professionals to serve the rural and underserved, especially in North Carolina and especially in family medicine,” Hammond said. “Dr. Kessler models that very well. He continued to grow, thrive and develop at Lincoln Memorial, and he’s coming back to Campbell to develop what he helped build here and flourish.”

Hammond credited the search firm, Storbeck Search, and partner Sue May in the decision to hire Kessler. The firm, he said, built a large candidate pool for this position and has partnered with Campbell in other recent national searches over the past several years, including the one for Campbell’s fifth president in 2015.

That president, Dr. J. Bradley Creed, said he was pleased to welcome Kessler back to Buies Creek, touting his experience and knowledge of osteopathic medical education in the 21st Century.

“He brings back with him valuable experience and capabilities,” Creed said. “He’s been a sitting dean, he’s very knowledgeable of the opportunities for medical school education today, and he’s very involved in several professional organizations. I think he’s poised to come back and make new contributions to Campbell, and I look forward to working with him as we continue our mission of graduating women and men who can serve humanity through their gifts and skills as doctors of osteopathic medicine.”

A native of Delaware who moved to central Pennsylvania during his teens, Kessler earned a degree in biology from St. Vincent College in Latrobe, Pennsylvania. After graduation, he chose to attend the Lake Erie College of Osteopathic Medicine in Erie, Pennsylvania. He was among the second class to enroll into the new school, and he looks back on his decision as a leap of faith.

“I received tremendous criticism from friends in college for choosing a developing school with no reputation,” Kessler said. “Today, Lake Erie is considered one of the top-tier osteopathic schools in the country and one of the largest medical schools in the nation.”

It was there where he met his wife, Ioanna, who was in the following year’s class. In his first year of residency, Kessler moved to Cleveland to be near Ioanna’s family and became a resident with South Pointe Hospital, a multi-specialty academic medical center affiliated with the Cleveland Clinic. Upon graduation, he started a clinical practice with the Cleveland Clinic and eventually transferred to University Hospitals in Cleveland.

His decision to join Campbell in 2011 was another leap of faith. But his experience as a student at Lake Erie prepared him for his administrative role at the first new medical school in North Carolina in over 35 years.

“It’s easier to go to an established school. It takes courage to be part of something new … to set the tone for classes to come,” he said back in 2013. “I think the experiences I learned going to a new school … they gave me the ability to take on challenges I normally wouldn’t have taken on.”

He sees a more mature Campbell University in 2021. No longer the “new institution,” the school has graduated four classes — nearly 1,000 doctors in all — and its faculty and programs have grown. Kessler said its footprint in North Carolina has grown as well, with more hospitals and clinics partnering to educate Campbell students.

“The residency programs have come to fruition since I’ve left,” he said. “It was just in its infancy in 2016. Our master’s program has flourished, and one of the more remarkable things the school has done is grow its interprofessional education initiatives. I am extremely impressed by all of it.”

Over the next five to 10 years, Kessler said he sees himself building those connections and partnerships and engaging with the young and growing alumni base.

“Connecting with our alumni is paramount in terms of our success moving forward,” he said. “We need those alumni to champion the mission of Campbell. I’m hoping to engage them and encourage them to remain an important part of our community.”

Kessler said medical education has changed significantly in the past five years, and the COVID-19 pandemic has amplified and accelerated that change.

“We’re using technology to educate doctors in ways we’ve never used before,” he said. “We’ve adapted to educating doctors online, and if we can get through this, they’ll be much better physicians for it.”

He said the pandemic has opened the eyes of med students and has shown many just how vital their roles are in a functioning society. He said students have also learned empathy, adaptability and perseverance over the past year.

Kessler will begin his role as dean on May 1. He and his wife are the parents of three children — (Katie 18), Ethan (17), and Evan (5) — and Ioanna is a family physician for WakeMed Primary Care and a clinical faculty member for Campbell.

“I want to thank Campbell for welcoming us back with open arms,” Kessler said. “My family is very appreciative of the opportunity Lincoln Memorial provided us over the last several years and for helping me develop into the person I am today. I just hope I live up to the expectations at Campbell.”