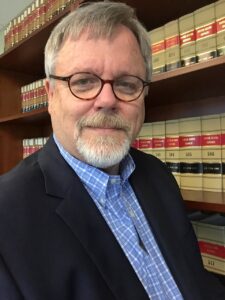 RALEIGH – Campbell Law School Professor Greg Wallace recently served as a panelist at Southern Illinois University’s Law Journal Symposium on April 19. The event, “Exploring the Second Amendment 10 Years after D.C. Vs. Heller,” highlighted the Supreme Court’s landmark but controversial decision recognizing that the Second Amendment protects the individual’s right to keep and bear arms for lawful purposes such as self defense. The symposium explored a variety of Second Amendment issues at the forefront of American legal, political, and social discourse.

Wallace served as a panelist on assault weapons, discussing common misunderstandings about the operation and use of such weapons and how courts have wrongly relied on these inaccuracies when upholding assault weapon bans.

“The symposium brought together some of the top legal experts and litigators in this area of the law from both sides,” said Wallace. “The discussions were both engaging and respectful.”

Wallace teaches constitutional law with an emphasis on free speech, church and state, right to arms, and constitutional interpretation. He regularly provides commentary on constitutional issues at conferences and symposia as well as in news reports, talk radio, and op-ed columns. He is a regular contributor to TheHill.com.