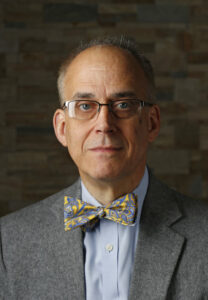 Beginning in January 2019, Pryor will spend five months in India studying the implementation of the new Indian Insolvency and Bankruptcy Code, 2016 with a view toward publishing an article comparing selected aspects of Indian and U.S. business bankruptcy law. If the Reserve Bank of India implements the consumer debtor provisions of the new law before he arrives, he will also investigate how the law affects individual debtors and their creditors.

The award marks Pryor’s second Fulbright Award, having previously lectured and co-taught in Jodhpur, Rajasthan in 2009.

“The Preamble to India’s Constitution says that India is a socialist, secular, democratic republic,” said Pryor. “For many years, all large industry in India was owned by the state, either at the national or local level. Beginning in the early 1990s, India moved to a more open market economy and its big industries became privatized.

“Following privatization, Indian business became more open to the world and began to experience more market failures and successes, but the country had no legal means by which to deal with business failure. Finally in 2016, India enacted a modern bankruptcy law and implementation began the following year. This Fulbright Award will provide me with an opportunity to study its implementation, how it is working, and how it compares to our long-standing American bankruptcy system.”

Pryor is one of over 800 U.S. citizens who will teach, conduct research, and/or provide expertise abroad for the 2018-19 academic year through the Fulbright U.S. Scholar Program. Recipients of Fulbright awards are selected on the basis of academic and professional achievement as well as record of service and demonstrated leadership in their respective fields.

“A Fulbright Award is a mark of great distinction for both the recipient and the school, and we are very proud of Professor Pryor,” said Campbell Law Dean J. Rich Leonard.

Pryor joined the Campbell Law with the beginning of the 2015-16 academic year. Boasting more than 17 years of commercial law practice, he teaches Bankruptcy, Contracts, and Sales and Leases courses at Campbell Law.

Prior to Campbell Law, Pryor served on the faculty at Regent University School of Law beginning in August 1998. He was previously a visiting professor at Campbell Law (2010-11), as well as a resident scholar at the American Bankruptcy Institute in Washington, D.C. (2013), Fulbright Scholar at the National Law University in Jodhpur, India (2009), and visiting professor at Handong International Law School in Pohang, South Korea (2006). He was also the director of Regent’s Summer Program in International Human Rights in Strasbourg, France (2005 and 2008).

Pryor’s published scholarship focuses on the details, history, and moral-political justification for the laws of the courses he teaches. He also maintains Pryor Thoughts, an online blog on law, culture, and tradition.

Pryor holds a B.A. from Dordt College and an M.A. from Reformed Theological Seminary. He earned his J.D. from the University of Wisconsin College of Law.

The Fulbright Program is the flagship international educational exchange program sponsored by the U.S. government and is designed to build lasting connections between the people of the United States and the people of other countries. The Fulbright Program is funded through an annual appropriation made by the U.S. Congress to the U.S. Department of State. Participating governments and host institutions, corporations, and foundations around the world also provide direct and indirect support to the Program, which operates in over 160 countries worldwide.

Since its establishment in 1946 under legislation introduced by the late U.S. Senator J. William Fulbright of Arkansas, the Fulbright Program has given more than 370,000 students, scholars, teachers, artists, and scientists the opportunity to study, teach and conduct research, exchange ideas, and contribute to finding solutions to shared international concerns.

Fulbrighters address critical global in all disciplines, while building relationships, knowledge, and leadership in support of the long-term interests of the United States. Fulbright alumni have achieved distinction in many fields, including 57 who have been awarded the Nobel Prize, 82 who have received Pulitzer Prizes, and 37 who have served as a head of state or government.

For further information about the Fulbright Program or the U.S. Department of State, please visit http://eca.state.gov/fulbright or contact the Bureau of Educational and Cultural Affairs Press Office by telephone 202-632-6452 or e-mail ECA-Press@state.gov.