Dr. Richard Baggaley is a member of the School of Osteopathic Medicine’s inaugural class in 2017. He is a third year pediatric resident at the Medical College of Georgia in Augusta, Georgia.

What has the COVID-19 impact been like for you, your colleagues, and patients?

It’s been a really crazy experience. The way COVID-19’s impact started out for me personally, I was working on the inpatient floor, and we had not had a positive case in Augusta yet.

I got a call at 4 a.m. on March 9 from my program director, and one of the residents I had been working with tested positive for the virus. That was the first case in Augusta — a medical resident who had no idea where they were exposed.

At that time, the protocol was an immediate 14-day quarantine if you had contact with someone who was positive. So I went into quarantine, along with my kids and my wife. We hunkered down, then within a few days, they revisited that protocol and said if you had no symptoms, you could work wearing a mask.

So, that’s how it started with me — I got quarantined.

I returned to work as we were adjusting to a schedule designed to have the least amount of staff possible while still running the hospital. Normally, we would have about eight residents running different teams in the inpatient part of the hospital, and then we went to having three running all of them. Since then, we are on Team A and Team B for two-week-on, two-week-off rotation with following social distancing when we are off.

Obviously, different parts of the country are having different experiences; some states are hit really hard and some aren’t. Augusta has not been yet, but we get transfers of the worst patients from Phoebe Health in Albany, because we are their transfer center. Especially the pediatric patients; they do not keep them there if there is any kind of issue such as respiratory distress. 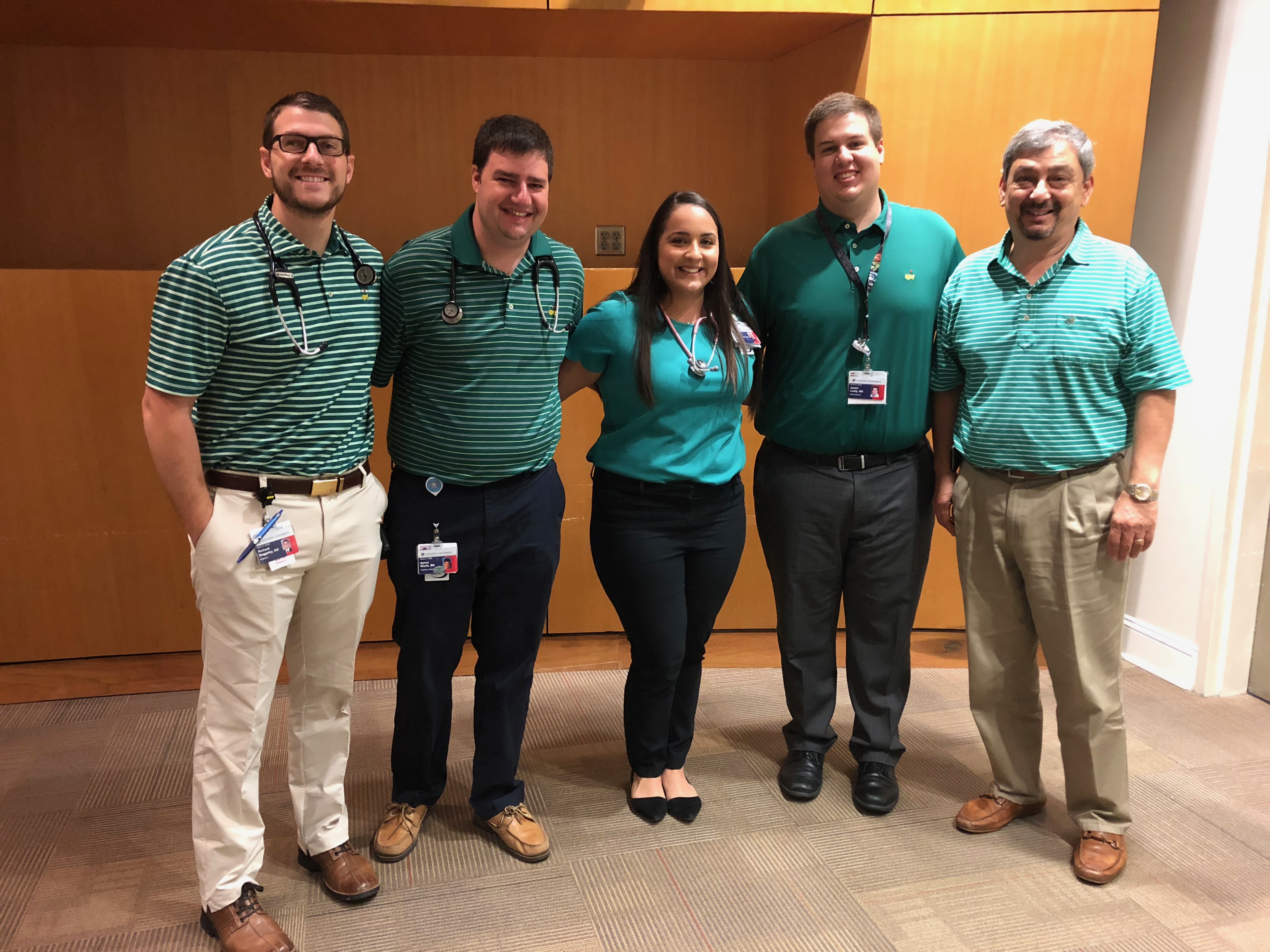 We see a lot in the press regarding the shortage of supplies — have you experienced that at your hospital?

Yes, we have been on shorter supplies. I’m not sure how much of that is preemptive protocols preparing for our peak, which is supposed to happen in about three weeks, or if we are truly already short.

The N95 masks — our typical protocol would be you wear it into the room once and then after that, you throw it away. The new procedures — you wear it when you go in to talk to the patient and then you put it in a plastic bag by the door when you leave, so anytime you go into that room after that you just wear the same mask. I know now it has gotten to the point where they are basically wearing one mask all day.

Our PICU has increased the age of who we will take care of; normally top is 20 — and that’s pushing it — it’s normally 18. We are prepared to increase the age in anticipation of the surge if it becomes necessary.  But, I haven’t seen that happen, yet.  There is a lot of concern on the part of pediatric residents if that becomes a reality because we haven’t taken care of adult patients in over 3 years.

Augusta University has been in the news with our Gov. Brian Kemp because he felt we did the best as far as response. The University created an app for telehealth as soon as the outbreak started. It’s been a huge thing that has taken off and all providers with the hospital are participating in it.

As a physician, I go into the app, and I see a screen that says there are patients in the virtual waiting room, and I video chat with them. They tell me their symptoms and whether they have had any contact with the virus, and then I let them know whether they qualify to come in and get tested or not or to stay home and quarantine. That has been good to be part of, and one of the ways they are making sure we do not miss anytime with our residency training is they have turned it into a Pandemic Rotation.

We are learning about how to handle a pandemic and implement telehealth.

How is your family?

My wife is a physician assistant, she works in internal medicine, so she is also a frontliner. Her parents live in North Carolina, and we sent our children up there for about a week as a precaution until we felt like we had a handle on how to take precautions and mitigate contact and to protect everyone in our household.

I know there are lots of providers out there who are quarantining from their families — especially emergency physicians who are seeing 20-plus coronavirus patients a day. We just aren’t seeing that, and so we feel like we are not in that boat. But just like everyone, our daycare is closed, and we are figuring out who is going to take care of them while we are working.

A crazy dynamic everyone has had to figure out, but overall, we have been doing pretty well.

What other impacts are you seeing? 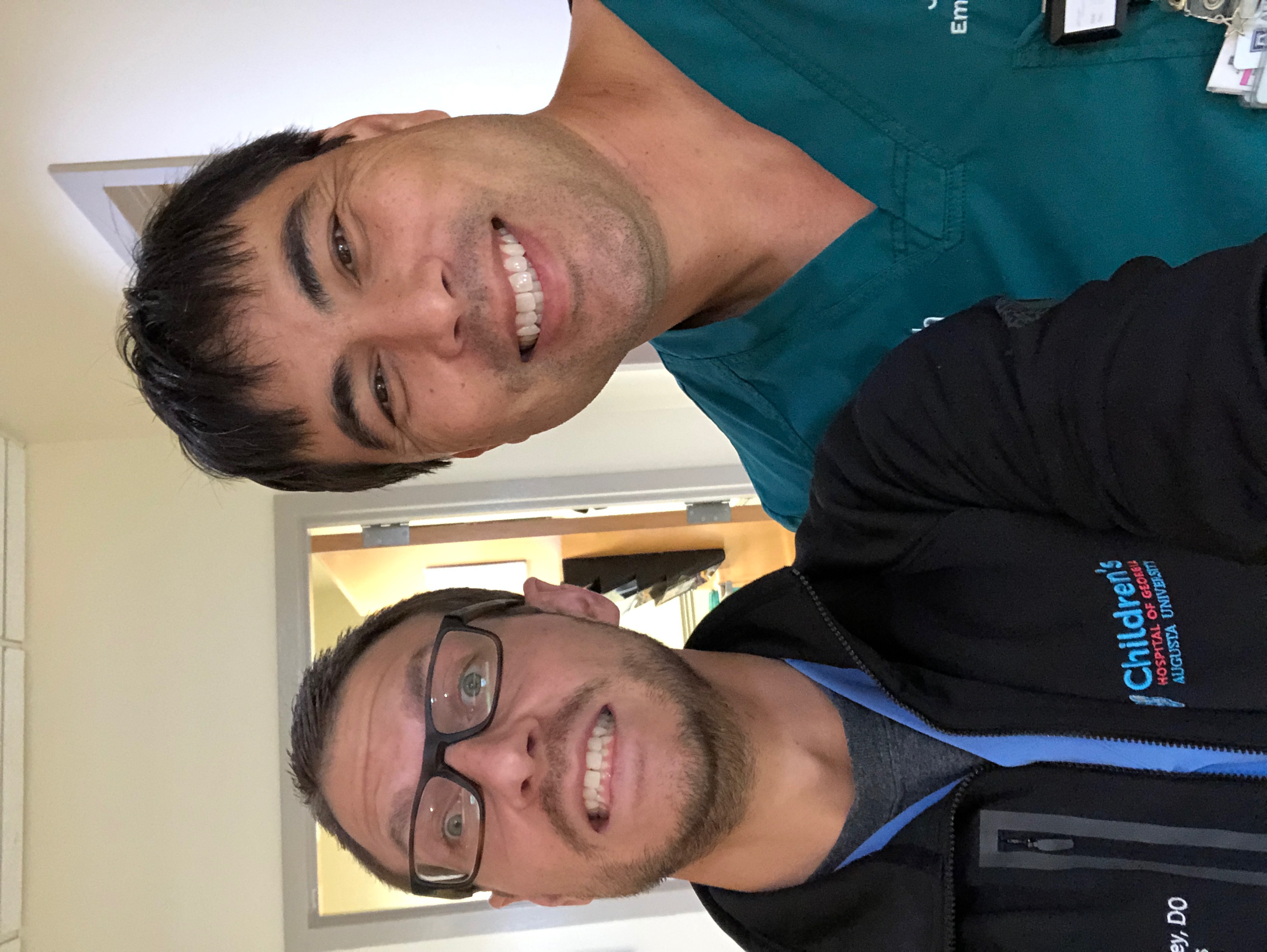 There is definitely a concern within the pediatric realm that there will be an increase in abuse because people are with their kids all day, and they are not used to that. There have been cases already in our hospital and other programs. It will be interesting to see retrospectively if there is an actual uptick. It is one of the biggest concerns in the pediatric profession.

Before they were saying pediatrics isn’t particularly involved in this virus because our patients aren’t as impacted as older populations. There has been a slight increase in the United States, but we have not seen a lot of severe cases here in the pediatric population. The few I have treated have not been severe, and the more severe — those who have been intubated — in the United States are older I believe.

The folks outside the medical profession who view us as heroes being out on the frontline, that is great. However, unfortunately, what comes with that is heroes are immune. Heroes are all-giving, and their altruism knows no bounds. But, like the situations in New York, physicians are writing their wills, and they are that scared of dying from this.

I cannot honestly say I wouldn’t hesitate to go to work if I was in the same situation. I would. The problem with saying we are all heroes is it creates an expectation that everyone will just step up and go, but there’s got to be a place where doctors are going to say if there isn’t protective equipment, I can’t do this. The risk is too high. So, I think it’s important to realize we are humans, and hospitals have to view it that way; people cannot be fired by hospital systems for speaking out.

Dr. Nisha Mehta from Charlotte has worked tirelessly and wrote a proposal — Congressmen asked her for a list of what physicians need/want. So, she asked in the groups for input and wrote a response regarding better conditions, better pay, loan forgiveness and some type of hazard pay for the families of physicians who have died due to the virus.

The COVID-19 Pandemic Physician Protection Act (CPPPA) legislation — I’ve helped Dr. Mehta and other physicians work through it and it’s been awesome to see that come together.

It’s been an awesome movement in that it has brought so many physicians together for one cause. It has been cool to see the unity of physicians getting behind each other and supporting each other.

We need the legislation to go through to help protect the people who are going out there without protective equipment because it’s not being provided. And instead of saying this is heroic, we need to look at the shortcomings of the system and how we have failed practitioners and physicians. It really is a huge failure — it makes it so they cannot do their work. We need to make sure health care administration does not steal the voice of the professionals who are doing the work because the impact trickles to everyone including the patients.