RALEIGH — The orange and white Campbell University mobile unit and medical tents stationed at Forest Hills Baptist Church in Raleigh on Saturday represented hope and much-needed assistance to more than 150 Afghan refugees under the care of Lutheran Services Carolinas.

Students and faculty from the Jerry M. Wallace School of Osteopathic Medicine joined other doctors and student doctors from the area to provide health screenings and other on-site medical care to the men, women and children driven from their country by conflict, violence and persecution and currently staying in the U.S. under a Special Immigrant Visa.

According to Dr. Joe Cacioppo, chair of community and global medicine and associate professor of emergency medicine for Campbell’s med school, the University got involved in this service for local refugees after a request by Lutheran Services to fill a need. According to Cacioppo, this group of refugees are among the 35,000-plus Afghan men and women currently staying in the U.S. and awaiting new homes after the chaotic evacuation at Kabul Airport over the summer, and their medical care since arriving has only included COVID vaccinations and possibly tuberculosis screenings.

“They’re sort of in a transitional period right now,” Cacioppo said. “They’re considered ‘humanitarian parolees,’ so they have no medical benefits whatsoever. We’re here to fill that gap for them, to get them a general screening and to see if they have the medications they need. Once they’re fully vetted [by the government], they become refugees, and will be offered Medicaid insurance. And once they are insured, we’ve worked out arrangements with [a health clinic] in Raleigh to transfer their care.”

Cacioppo said his students gained more than medical experience by taking part in Saturday’s screenings. He called the service aspect of their work “invaluable” and described the event in Raleigh as “uplifting.” 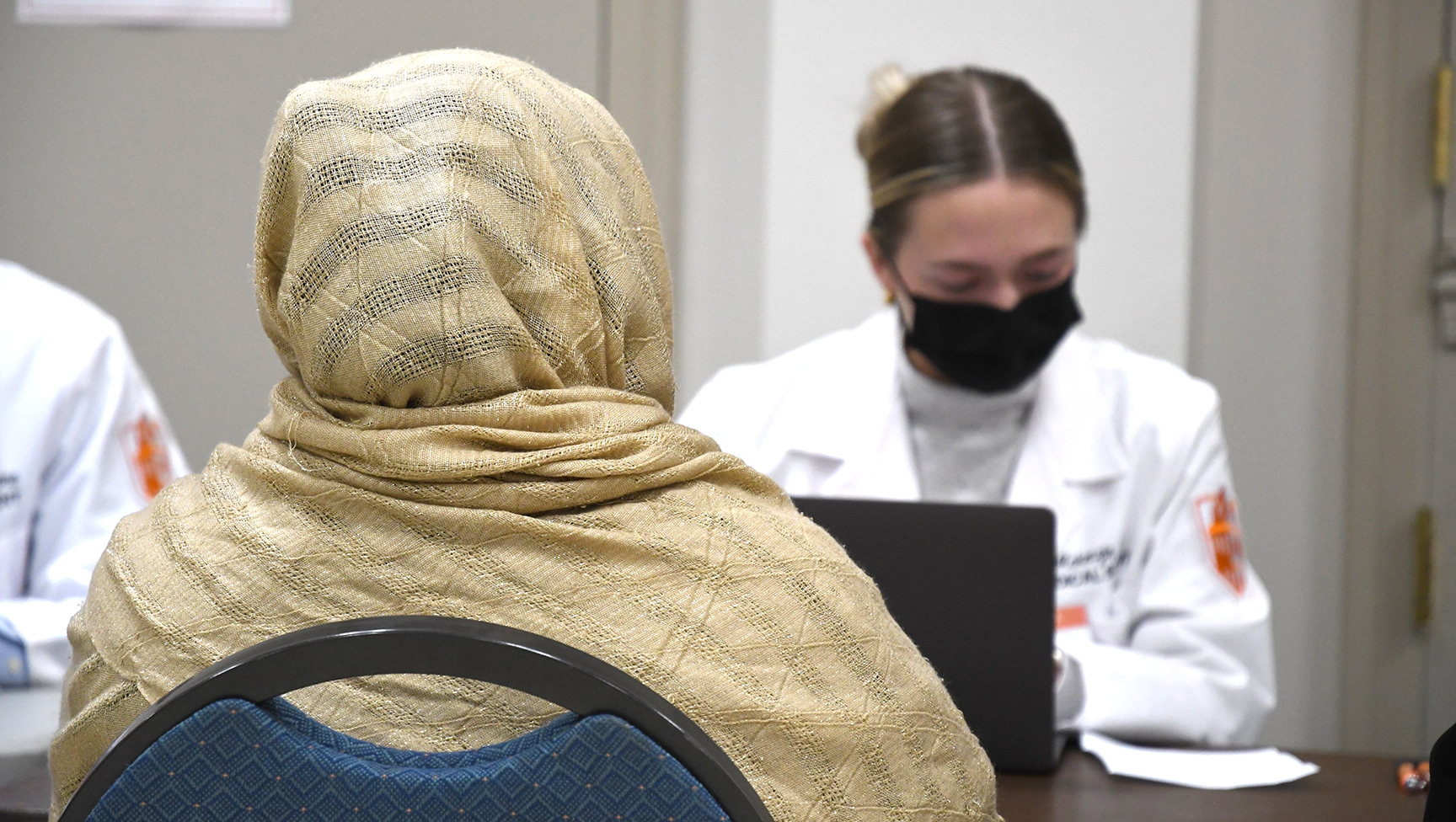 “Just to be able to help those who really need it — people who have gone through what they have gone through — is uplifting,” he said. “Besides the clinical training, the most important thing here is showing these men and women they are respected and they are worth it. It’s so valuable.”

Dr. Farishta Ali is not a Campbell graduate, but she was front and center in the mobile unit providing a comforting face and voice to those seeking care. Ali was born in Afghanistan and fled the country at a young age after her brother and father were murdered by the Taliban. She remembers begging for food alongside her six siblings as a child, because her single mother wasn’t allowed to work or leave the house. When they fled to Afghanistan and eventually the U.S., the struggles remained — poverty and overcoming language and cultural barriers proved difficult.

She stood before her fellow Afghans on Saturday to not only provide care, but to offer encouragement and share her testimony that the future can be bright. She rose from poverty to medical school, and today she practices psychiatry in Fayetteville.

“Being here is very, very special to me,” she said. “And I’m not trying to let it affect me, but today reminds me of everything that I went through to get to where I am now. I know the trauma these people are under and what they went through, and I know it’s difficult for them. They’re scared about the uncertainty before them. I want to help them and tell them there’s a bright future and to tell them they’re safe now. It’s possible to go after your dreams, and it’s possible to have opportunities. These are things they need to hear.” 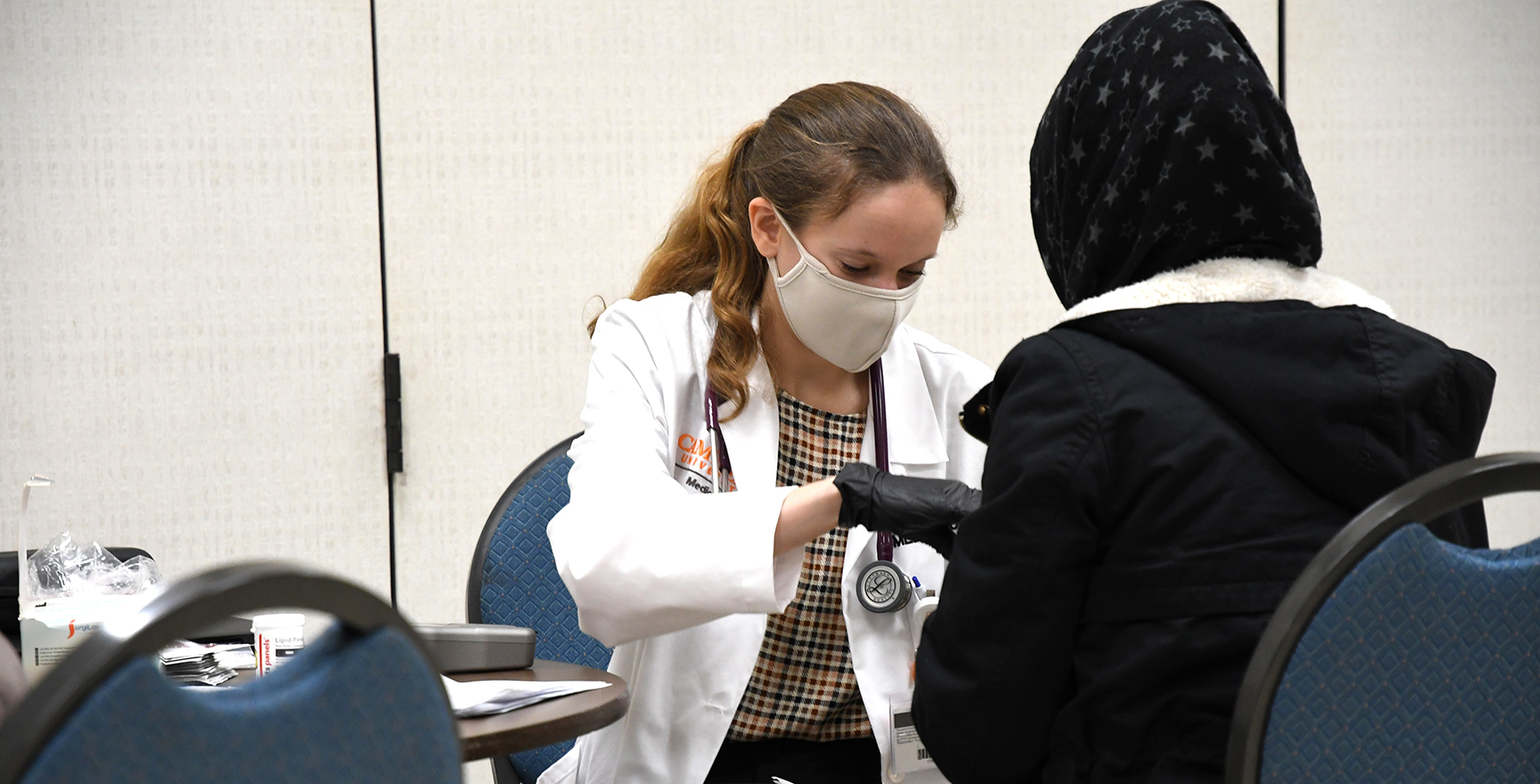 “They escaped Afghanistan, but their lives have still been complicated in these past six months,” Ward said. “They endured significant trauma on their exit and in their journey here. And that trauma sticks with them because of what they’ve lost in a very short amount of time. There’s trauma about the uncertainty of their future and the uncertainty of what’s happening to their families still in Afghanistan. The Taliban may not be able to get to folks who are directly connected to the U.S. military anymore, but they’re going after families and friends of those who escaped. There’s a profound sense of worry, loss and fear over what is happening to their family and friends back home.

For Ward, seeing the orange medical tents and the Campbell white coats at the church he’s served at since 2013 was heartwarming.

“To see a school that you love and to see a school that has grown by leaps and bounds in the time since you’ve been out in the community, doing the good that you know they do but don’t always get a chance to see — it’s fantastic,” he said. “The more orange I see, the better.”