When asked what career path has the highest rate of suicide, ministry professionals attending this year’s Minister’s Health Summit were stumped.

“You aren’t even close,” said Bruce Rogers-Vaughan, associate professor of the practice of pastoral theology and counseling at Vanderbilt University, as his audience guessed careers in finance, law, and psychology. “The profession with the highest suicide rates in America is farmers. We’re surrounded by them right now out here in Buies Creek.”

This troubling statistic is backed by the Centers for Disease Control and Prevention (CDC), which found that people working in agriculture take their lives at a rate higher than any other occupation — even doubling the suicide rate of military veterans. Rogers-Vaughan theorized that the current financial climate may be the culprit, citing policies that prohibit farmers from saving seeds and allow monopolies on farm equipment.

“Here we have a group of people who have arguably one of the most important jobs for providing for the good of society,” he said. “And because of the current structure, they can’t afford to buy seeds.”

Studies have shown that farmers must deal with the stress, financial pressure and difficult working conditions with little human contact, often leading to feelings of isolation. Their mental health has become a global crisis: Since 1995, more than 270,000 farmers have taken their own lives in India alone.

In an effort to address these statistics and provide pastors with resources and tools that will help them take better care of their congregations, Campbell University Divinity School hosted its third annual Minister’s Health Summit on Thursday. Formerly the Pastor’s Health Summit, the one-day retreat promotes wellness, self-care and education for ministers across the state and region.

Students and professors from the School of Osteopathic Medicine, College of Pharmacy & Health Sciences and School of Nursing were also on hand as session presenters and practitioners. 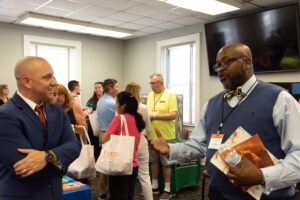 More than 75 people gathered in Butler Chapel for Rogers-Vaughan’s keynote presentation, which implored church leaders to push back against what he calls “neoliberal” culture —  the current phase of capitalism that is eating away at the social, interpersonal, and psychological health of congregations.

“In the 1940s, people could pull themselves up by their bootstraps and emerge into a new social class, but today, that is simply not true,” said Rogers-Vaughn, discussing economic inequalities and their consequences for American congregations. “Part of our declining church attendance problem is simply that people are working like crazy. The weekend is the only time they have to spend with their families.”

Rogers-Vaughn also addressed the dangers of worshiping the market rather than Jesus, recent trends away from marriage in the lower economic classes, and loneliness and lack of identity in an individualistic society, all of which create a void that congregations are uniquely positioned to help fill.

“The last time I heard Matthew 6:24 preached on, I was 12 years old,” he told the audience. “We avoid these passages in today’s churches. But how can you get more direct than ‘you cannot serve both God and wealth?’”

If the attendance, participation and feedback are good indicators, the third-annual summit was a success. Following Rogers-Vaughn’s presentation on mental health, ministers were given health screenings and attended breakout sessions on topics including mental health and depression, work-life balance and family life, marriage and grief counseling, financial health and more. 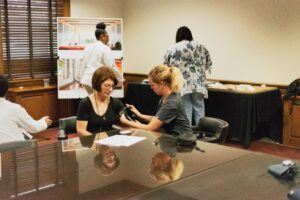 Summit organizer Peter Donlon, the Divinity School’s director of church relations and development, was pleased with the open dialogue he heard between speakers and ministers throughout the day.

“This year’s speaker truly encouraged reactive discussion from everyone who attended,” said Donlon. “He brought up social justice issues happening right in front of us that we simply don’t realize are going on, and really helped the summit explore them deeper.”

For Donlon, the biggest takeaway from the 2018 summit is that church ambassadors need to be aware of the changing cultural landscape that affects congregations and address mental health issues.

“The purpose of events like the summit is for ministers to learn to provide true community and care, not only to their churches, but to themselves.”