Omar Banks paused a few moments to take in the scene upon his official introduction as Campbell University director of athletics on Tuesday. Before a standing room-only crowd of orange-clad supporters in the lobby of the Pope Convocation Center, he began his tenure with three words.

The former executive associate athletics director at Virginia Tech will take over a rising Division I athletics program coming off its first Sasser Cup honor (awarded to the overall top Big South program) since rejoining the conference in 2011.

Banks comes to Campbell having served as chief financial officer for the 44th-largest collegiate athletics program in the nation at Virginia Tech, which saw an $11 million increase in total revenue over the previous year and generated a surplus for the first time since 2015. Prior to that, he oversaw all aspects of a $61 million athletics budget at the University of Cincinnati.

He said colleagues called him crazy when he decided to leave “corporate America” — jobs at IBM and Fidelity Investments — for a business manager position at Hampton University in 2005, but shared how that decision eventually led him to Campbell.

“God had a plan for me, and I followed that plan,” said Banks, who credited three people in helping him through his transition. The first two were Ernest Jenkins Jr., his former boss at IBM and recently retired vice president at North Carolina Central University; and Craig Littlepage, former director of athletics at the University of Virginia.

The third was Whit Babcock, who mentored Banks as director of athletics at both Cincinnati and Virginia Tech.

“They say it’s a compliment if someone hires you after they’ve worked with you. That means you probably did a good job,” Banks said. “He brought me on at Virginia Tech, and he’s been my strongest advocate in propelling me into a leadership role in athletics. He’s a leader in this industry, a colleague and most of all, a friend.”

Banks said the three areas he’d like to focus on in his new role are getting the most out of the student-athlete experience, giving back to the community and being competitive in all programs. He turned to the staircase in the convocation center lobby Tuesday where several athletes were sitting and told them that he’s lived their life [Banks played football at the University of Richmond in the 1990s] and relates to their experience.

“When student-athletes attend Campbell, we want them to learn to deal with success and failure, to develop time management skills, to relate to people from diverse backgrounds and different cultures , to demonstrate a commitment to athletic and academic success and to thrive socially,” Banks said. 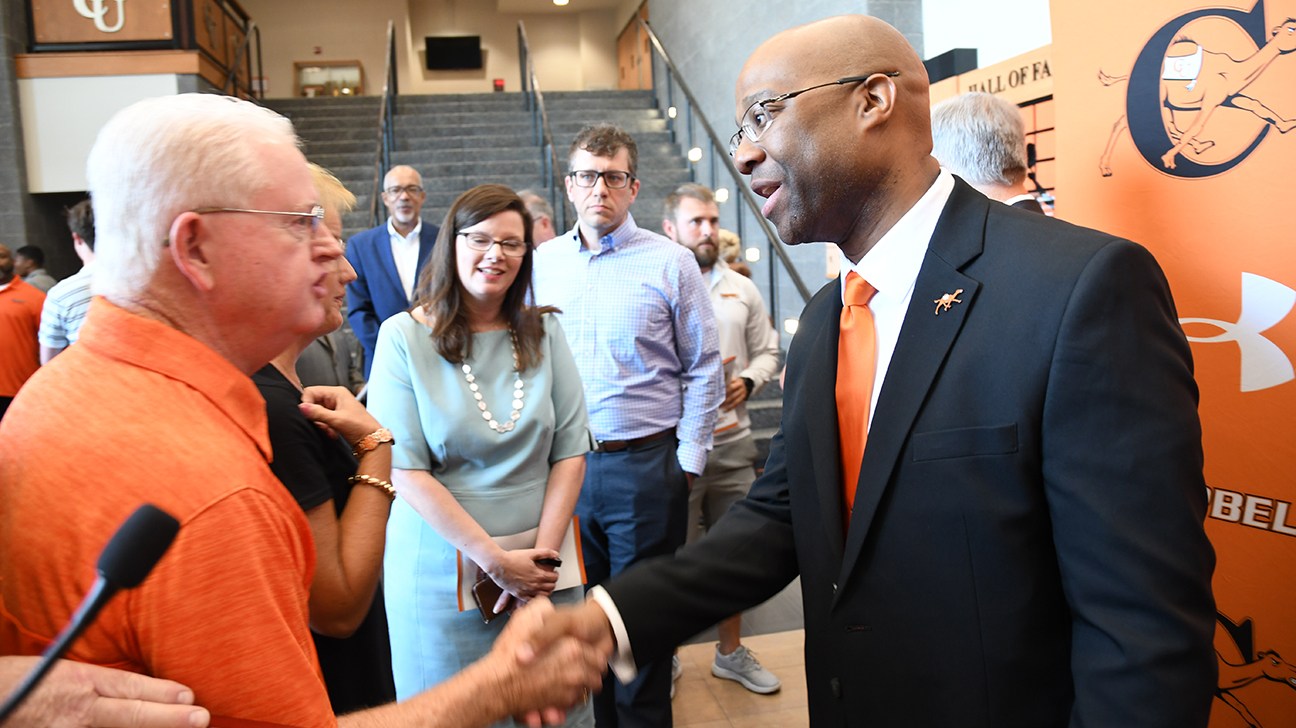 In giving back to the community, Banks said sports has a way of connecting people from different social, economic, culture and religious backgrounds; and athletic departments have a responsibility to influence and connect with a community. “We want to share stories of oru student-athletes in a manner that resonates with and moves people to engage and invest their time and resources into our athletes and their experiences,” he said. “We want that unique Campbell brand of ‘leading with purpose’ to be promoted locally, regionally and nationally.”

Banks said Campbell’s position in the Big South Conference exposes the school to some of the best schools in the country. He said this year’s Sasser Cup recognition shows the University has a strong foundation in place, and he said he wants to continue that momentum.

“Let’s capitalize on the moment,” he said. “That starts with the coaches we have in place. I’ll be connecting with each and every coach; we want to continue and build on the efforts and accomplishments of this past season.”

“It needed to be someone who supports and embodies Campbell’s distinctive mission, our Christian values and perspectives we know are essential for preparing students to make a difference through service and for leading with purpose,” Creed said. “One who through life and leadership will challenge and inspire the best of us to be and do the very best that we can.”

Banks donned an orange tie to his Campbell introduction, and several of his family members on hand Tuesday also wore orange for the occasion. He was joined by his parents, his wife Ellen and their two children, Omar II and Marianna.