The outdoor commencement ceremonies held by Campbell University on Thursday and Saturday this week were performed under blue skies and with perfect spring temperatures. The ceremony on Friday for the College of Pharmacy & Health Sciences was marred by bad weather, and it and the School of Law were both delayed as thunderstorms rolled into the area.

Thus presents the gamble of large-scale outdoor events, especially those held in May, when the weather is less predictable and storms are more frequent.

It’s the reason Campbell University moved all commencement ceremonies inside the John W. Pope Jr. Convocation Center in December 2008 a few months after the arena was completed. Graduations for the last 13 years have been held inside the spacious confines of the center, which seats over 3,000 people and keeps them cool and dry, regardless of the forecast.

After a year with virtual graduations brought on by the COVID-19 pandemic, Campbell University returned to in-person commencements this week. The events were moved outdoors to follow guidelines and restrictions set forth by the state of North Carolina and the CDC. All ceremonies — aside from the law school’s event in downtown Raleigh’s Red Hat Amphitheater — were held at Barker-Lane Stadium.

The outdoor atmosphere was welcomed by Mark Bushhouse of Fayetteville, who earned his Bachelor of Health Science degree on Saturday.

“The pandemic has been so divisive, and graduation outdoors has created an environment where everyone can find a way to be happy. You can be with your family, masked or not masked depending on your comfort level, and there is plenty of space for everyone. I think if it were indoors, the atmosphere would be much more tense and it would take away from the celebration.”

Outdoor graduations go all the way back to Campbell’s founding as Buies Creek Academy in 1887. The first commencement was held that spring on May 20, 1887, with Raleigh News & Observer founder Joseph Daniels delivering the address. He later described the event having “no less than a thousand people present, gathered to cheer the young [J.A. Campbell] and his noble undertaking.”

In the 20th Century, most ceremonies were held in today’s Academic Circle, outside of Kivett Hall and later in front of D. Rich. 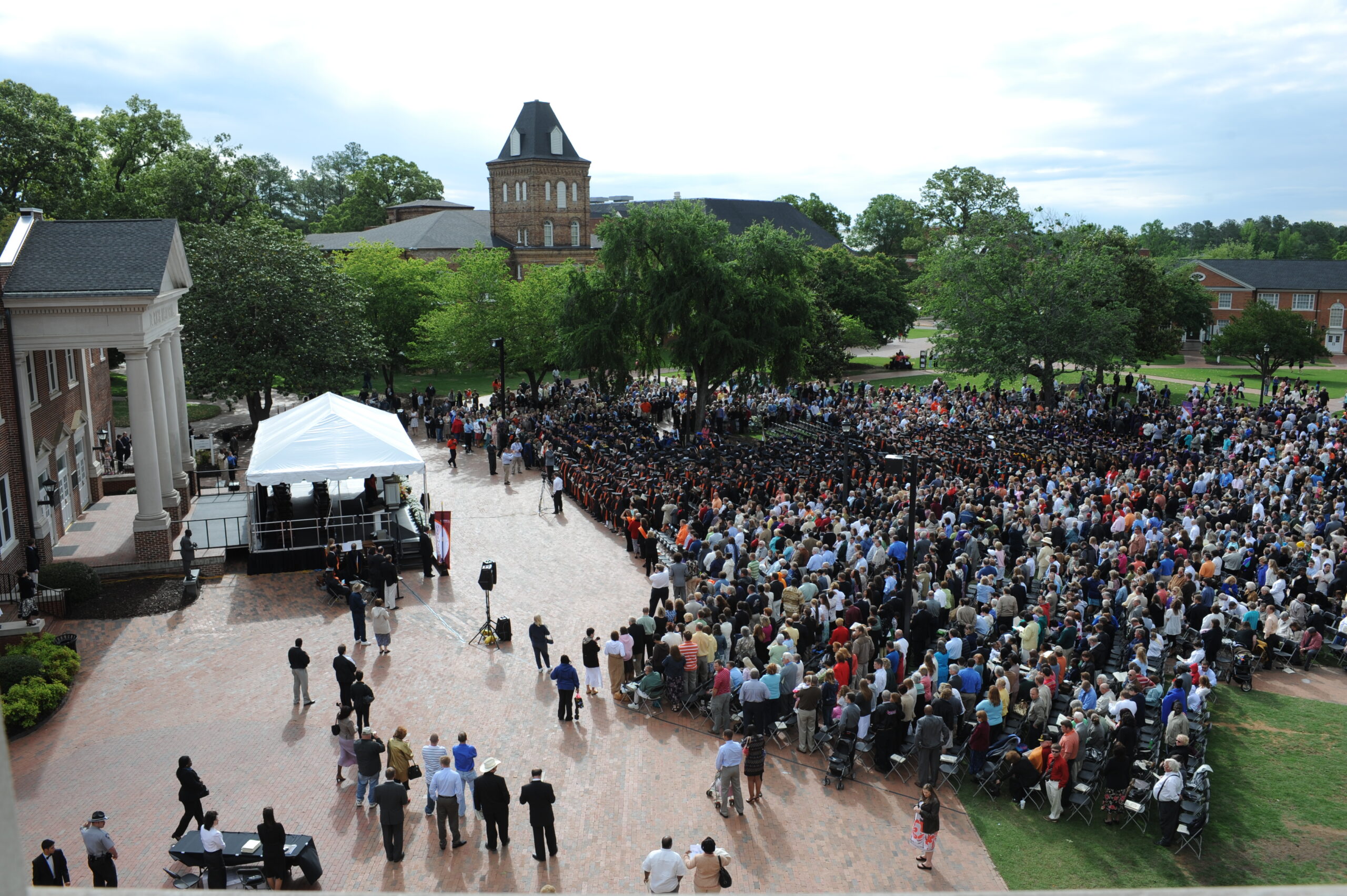 Jennifer Parrish, a 1990 graduate, looks back fondly on her outdoor ceremony, recalling the weather being “awesome” on that Monday morning.

“It was neat to be able to have graduation right in front of D. Rich/Turner Auditorium and have Dr. [Norman Adrian] Wiggins hand me my diploma,” said Parrish, adding that while it’s been nice for Campbell to host ceremonies in the convocation center, she’ll always prefer the outdoor atmosphere. “I just like the feeling of an outdoor graduation versus being indoors. Typically I think most outdoor venues have more seating and can accommodate more guests. This year with the pandemic, I think it is even more important, but should be a tradition continued for years to come.”

Tammi Fries, a 2004 graduate and currently Campbell’s director of annual giving, recalled her graduation on the Monday after Mother’s Day as memorable, but mostly because of the heat. She’s since experienced several ceremonies at the convocation center, and has come away with definite preference.

“I prefer being inside,” she said. “Being comfortable in the gown helps the graduates focus on the words spoken in the ceremony, and the environment inside Gore arena is energetic.”

Still, she looks back fondly on her big day 17 years ago.

“What I remember most about my outdoor graduation in front of D. Rich was immediately after the ceremony concluded, graduates started spreading out in the Academic Circle looking for their family, and families started disbursing to find their graduates,” she said. “My dad was the first to find me, and we were standing almost directly in the middle of the circle. He immediately gave me a hug and said he was very proud of me.” 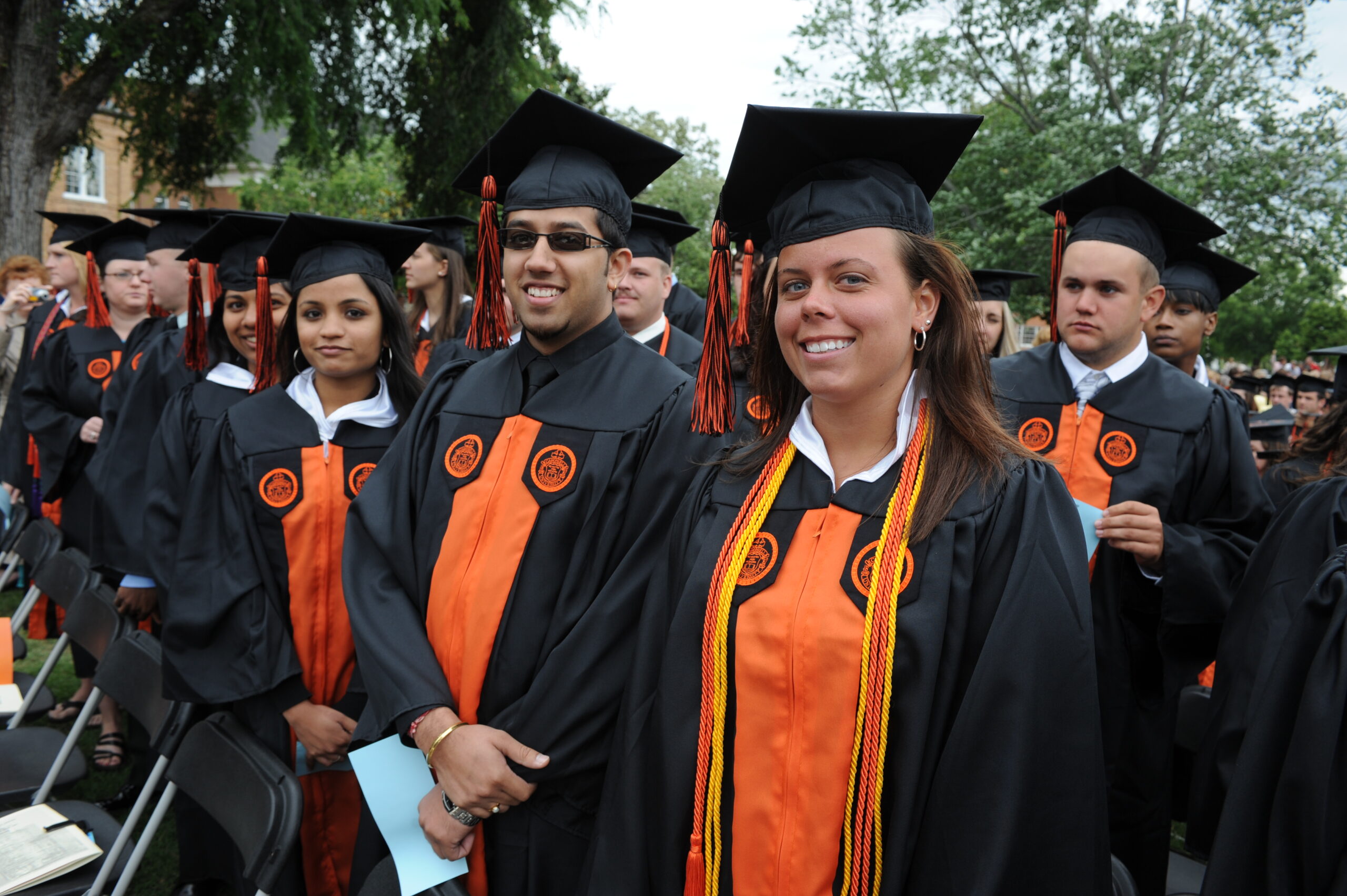