RALEIGH — Campbell Law School is among the top schools ranked by preLaw Magazine, a National Jurist Publication, as most improved for bar exam results in its Spring 2020 edition. The new ranking shows the bar passage rate of law school’s graduates in 2019 improved nearly 24 percent over the graduates in 2018 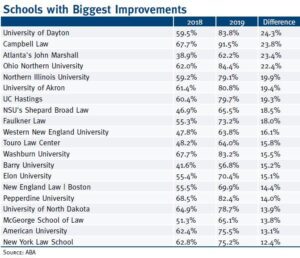 Campbell Law also ranks among the nation’s top law schools for bar exam overperformance, according to the most recent data released by the American Bar Association (ABA) Section of Legal Education and Admissions to the Bar.

Campbell Law’s ultimate bar passage, which indicates bar exam passage within two years of graduation, is 93%. Of the 141 Campbell Law graduates from the class of 2017 who sat for the bar exam, 93.48% (or 129 graduates) have successfully passed.

“We tell prospective students from the moment that they begin the admissions process, as well as our current students throughout their three years here, that we will stick with them until they get their license,” said Dean J. Rich Leonard. “This report shows that we are true to our word, and that we take this commitment as seriously as possible.”

The new data shows that in the aggregate, 89.5% of 2017 law graduates who sat for a bar exam passed it within two years of graduation. The two-year “ultimate” aggregate success rate is slightly better than the 88.64% comparable figure for 2016 graduates.

Since its founding in 1976, Campbell Law has developed lawyers who possess moral conviction, social compassion, and professional competence, and who view the law as a calling to serve others. Among its accolades, the school has been recognized by the American Bar Association (ABA) as having the nation’s top Professionalism Program and by the American Academy of Trial Lawyers for having the nation’s best Trial Advocacy Program. Campbell Law boasts more than 4,300 alumni, who make their home in nearly all 50 states and beyond. In 2019, Campbell Law celebrated 40 years of graduating legal leaders and 10 years of being located in a state-of-the-art facility in the heart of North Carolina’s Capital City.