Bob Roller, who has served as Campbell University’s director of athletics since 2011, has announced his resignation to become the national director of sports marketing for Shriners Hospitals for Children. 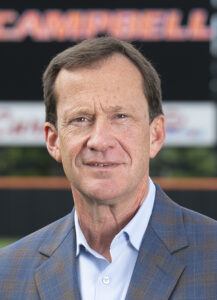 “Bob Roller is a valued friend and colleague with whom I’ve had the honor to work at two universities,” said Campbell President J. Bradley Creed, who also worked with Roller at Samford University in Birmingham, Alabama. “His influence on Campbell Athletics is significant with accomplishments by our student-athletes in the classroom and in the arena of sports competition.

“Through fundraising, facilities enhancement, and his overall leadership, Bob Roller has played an important role in making Campbell a better University. We will miss him, but owe him our gratitude and appreciation.”

Introduced on July 20, 2011, as the fourth AD of Campbell’s Division I era (since 1977-78), Roller joined the Fighting Camel staff after spending more than 11 years as director of athletics at Samford.

In his first press conference, he vowed to equip and develop Campbell’s student-athletes to become “graduates and leaders, while hanging championship banners across campus.” In his eight years in Buies Creek, Roller followed through on that promise and then some, leading the athletics department to new heights in academics, facility construction, fundraising and competition.

For 10 consecutive semesters, Campbell student-athletes (which number more than 630) have maintained an overall grade point average of 3.0 over the University’s 21 NCAA intercollegiate sports. On the field, Roller oversaw numerous Big South Conference championships and NCAA tournament berths and guided the young football program to scholarship FCS status as a new Big South member in 2018.

“There are no words to express what these last eight years have meant to me working alongside the tremendous people of Campbell,” Roller said. “Carolyn and I have immersed ourselves in this community and University, and it has been so rewarding to be a part of the transformation and growth. I have served with two extremely supportive presidents and a University cabinet that loves this institution.”

Roller’s list of accomplishments and successes is long. During his tenure, the women’s golf team has won five Big South Conference championships (2012, 2014, 2016, 2017, 2018) and competed in seven NCAA Regionals and three NCAA Championships; the men’s golf team competed in the 2016, 2017 and 2018 NCAA Regionals; the men’s cross country team has won three-straight Big South titles (2016, 2017, 2018); the wrestling team won its first Southern Conference Championship in 2017; the men’s tennis team claimed a Big South Championship and NCAA regional berth in 2018; the men’s soccer team claimed the 2018 Big South crown and earned an NCAA College Cup berth; and the baseball team has won four Big South trophies and made two appearances in the NCAA tournament.

Overall, Campbell Athletics’ 21 Division I programs have seen steady improvement in competition. That culminated with Campbell’s highest ranking in the Big South Conference overall sports trophy standings in both 2017 and 2018 since re-joining the league seven years ago. Campbell won the Big South men’s sport trophy in 2018 and claimed the program’s highest-ever finish in the Learfield Directors’ Cup (97th), a showing that was fifth among the 18 Division I programs in North Carolina and tops among the non-Power 5 conference schools in the state.

Roller also led a transformation of Campbell Athletics through major facility improvements and record fundraising. Chief among them was the expansion of Barker-Lane Stadium in 2013 that saw an additional 3,000 seats, an 80-foot-tall press box and presidential suite, new restrooms and new concession facilities.

Other major facility additions and expansions during his time include the renovation and dedication of Jim Perry Stadium, home of Campbell baseball, and the Jim and Daphne Perry Pavilion; the opening of the Burt Family Sports Performance Center; the addition of lights, an LED scoreboard and video board and state-of-the-art astroturf at Barker-Lane; installation of a four-sided center-hung LED scoreboard in Gore Arena; the dedication of the Irwin Belk Track and Clarence Roberts Field; renovation of the Eakes Athletics Complex (home of Campbell soccer); renovations to the James Nisbet Tennis Center; and the opening of Amanda Littlejohn Stadium.

In addition, Roller led the creation of The CAMMYs, Campbell’s multi-media awards show for student-athletes widely recognized as one of the finest events of its kind. Roller also helped bring the Buies Creek Astros — the Class-A Advanced Carolina League affiliate of the Houston Astros — to Jim Perry Stadium for the 2017 and 2018 seasons.

He also was instrumental in Campbell winning the bid to host the 2016 Big South Men’s Basketball Championship. The 2016 event held in Buies Creek drew the tournament’s highest attendance in the last five years. Campbell has also co-hosted the 2013, 2015 and the most recent NCAA Women’s Soccer College Cup (December 2018) and the 2014 NCAA Men’s Soccer College Cup, and hosted the 2015 Big South Softball Championship and the 2014 Southern Conference Wrestling Championship.

Campbell athletes have also donated more than 27,000 hours in community service around the Buies Creek area over the past seven academic years.

In his newly created role with Shriners Hospitals, Roller will provide executive oversight of all SHC sports initiatives and signature events, which include the annual East-West Shrine Football Game in St. Petersburg, Florida; Shriners Hospitals for Children Open PGA tournament in Las Vegas; the College Baseball Classic held annually at the Houston Astros Minute Maid Park; and a NASCAR sponsorship at selected race tracks near a Shriners Hospital.

“This new position with Shriners Hospitals for Children will allow me to utilize my skills in the areas of national sporting event management and sponsorships, along with SHC’s deep passion for helping children in need at our hospitals across North America,” Roller said. “We will continue to carry the banner across the country to support our Camels.”

Shriners Hospitals for Children have provided life-changing care to more than 1.3 million children over the past 95 years. At 22 locations in North America, the doctors and staff work to transform lives through specialized care to children with orthopedic conditions, spinal cord injuries, burns and cleft lip and palate. All care and services are provided regardless of the families’ ability to pay.

Roller is a native of Pearisburg, Virginia, and he earned his degree from Virginia Tech in 1983 and began his career as a student assistant in the sports information office for four years. He was the sports information director at UNC Wilmington and East Carolina University from 1983 to 1988. While at UNC Wilmington, Roller was also executive director of the university’s athletics fundraising program. He was director of communications for the Orange Bowl Committee in Miami, from 1988 to 1991. He was with the Orange Bowl when Federal Express became its first title sponsor in 1989.

Roller arrived at Samford in 1997 to direct the Samford Athletic Foundation. During his first two years, the foundation saw record growth in individual and corporate donations to the university’s athletics programs. Roller held that position until May 1999, when then-President Thomas E. Corts named him to the top position within the athletics department. During his time at Samford, the entire facilities landscape of the campus was transformed. New athletics venues were built for men’s and women’s basketball, volleyball, baseball, tennis, soccer, track and field and a football field house and strength and conditioning center were funded and constructed.

In the summer of 2003, he was elected to the prestigious executive committee of the National Association of Collegiate Directors of Athletics [NACDA] to serve a four-year term. He joined athletics directors from Kansas State, Stanford, Army and Clemson on the governing committee that oversees the activities of the 6,000-plus member organization.

Roller, who holds a master’s degree in education administration from Samford, is married to the former Carolyn Keller. He has one son, Brad, and three stepchildren — Kerstin, Kyle and Karrah.