Thirty-three students made history from their homes on Saturday as the first graduates of Campbell University’s School of Engineering.

The graduates, who earned Bachelor of Science degrees in Engineering (with concentrations in mechanical, electrical and chemical engineering), have secured jobs in a variety of industries — bio pharmaceuticals and manufacturing, design firms and architectural firms, federal agencies and the private sector. Many will remain in the Research Triangle area close to home, while others have secured jobs as far away as Wisconsin and New Hampshire. Still others will head to graduate school in the fall to continue their studies.

Founding Dean Jenna Carpenter wasn’t able to spend the historic day with her students, instead serving as the mace bearer during a virtual graduation ceremony held in a mostly empty Butler Chapel. She described her feelings at the end of her school’s first four years as a mix of elation and sadness.

“It is the culmination of five years of hard work on our part and four years on theirs,” she said. “We have watched them grow from high school students into engineers. While all of our students are special, this class is special in a way that no other class can ever be. They have helped us build the school and program from scratch.” 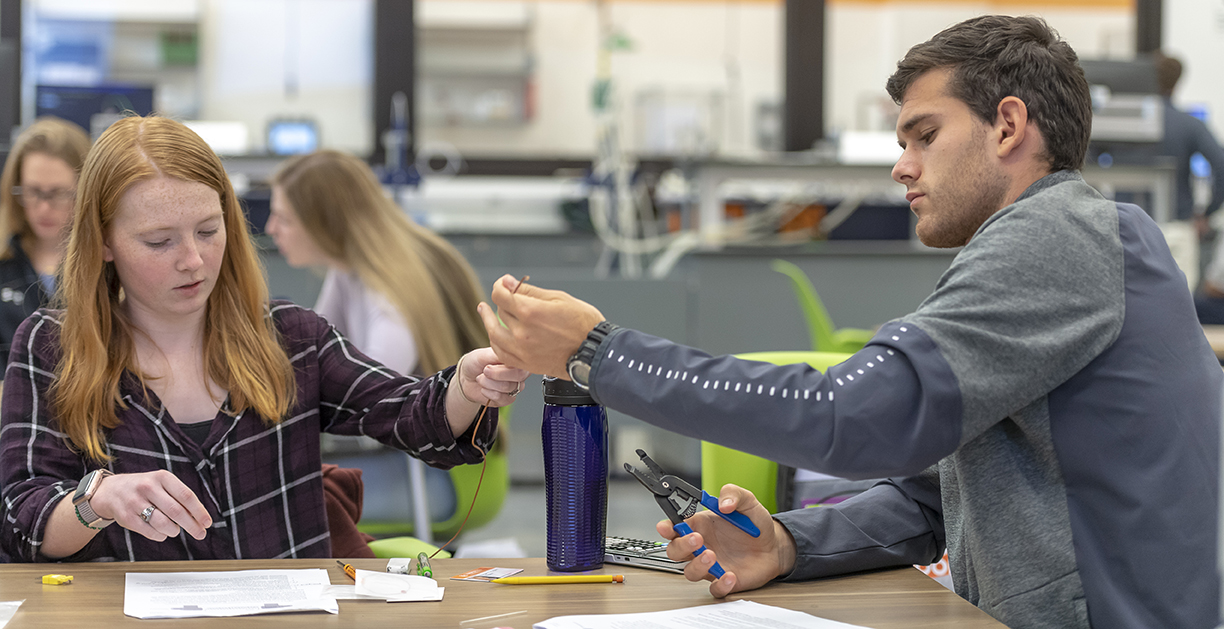 Campbell announced it was adding engineering back in 2014 and brought in Carpenter, then an associate dean at Louisiana Tech University, the following year. The school officially launched in the fall of 2016 with diversity in mind and a mission to offer a unique, hands-on, project-based approach to engineering.

In four years, the school has come a long way from fledgling program to a program that’s gained national attention for its approach. In the past year alone, the school competed in the NASA Human Exploration Rover Challenge for the first time, attended the Grand Challenges Scholars Program for the first time in Washington, D.C., became the nation’s 45th Kern Engineering Entrepreneurial school, and — perhaps most impressively — was named of the nation’s most inclusive engineering schools by the American Society for Engineering Education.

The program currently sits at more than 200 students, according to Carpenter, with plans for growth and additional concentrations on the horizon.

The COVID-19 pandemic put a halt to the charter class’ final weeks of lab work and several inaugural events like the senior picnic and Engineer’s Ball, but Carpenter is pleased that her graduates are entering a job market that’s still affording opportunities to engineers.

“The job market in engineering seems to still be robust,” she said. “The initial lockdown paused hiring for a few weeks, and some of our students have delayed start dates for their jobs, but they are continuing to interview and land jobs.”

Graduate Morgan Hughes will begin her career as an engineering validation associate at Pfizer in Sanford in July — a job she obtained after the pandemic began affecting the job market nationally. She said her new position may require working from home for a few days a week — in addition to wearing a mask and gloves while at work — but she considers herself fortunate to have a position so soon after graduation.

She credits her experience at Campbell and the hands-on instruction she received to prepare her for the next step.

“Being a part of the inaugural class meant that I got to help lay the foundation of what a Campbell engineer can be,” she said. “My education at Campbell gave me the ability to work in a team and leadership experience through projects and through academic clubs. I could not think of a better place to have gotten my education than Campbell.”

Michael Williams also cited teamwork when asked what he got most from his experience in the program.

“It’s a huge part of the professional world,” Williams said. “I will always have to be able to communicate effectively no matter what stage of life or work I am in. Also, I will have to be able to work well with others, both teammates and business partners. My various team projects during the past four years have given me a chance to see multiple types of teams and the different roles involved in successful teaming. I will certainly carry that with me into the next stage of my professional career.”

Nelly Zavala — the graduate heading to New Hampshire this summer to work for The Timken Company in their operation development program — said Campbell strengthened her confidence to bring unique ideas to the table in her career. Having to spend the final two months working solely online taught her other skills.

“If anything, the pandemic has taught me to be more patient with others and myself,” she said. “It also taught me self discipline that I didn’t know I had in me.”