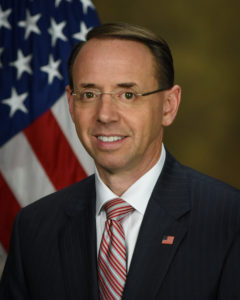 RALEIGH – United States Deputy Attorney General Rod Rosenstein will offer the commencement address at Campbell University Law School’s 40th annual hooding and graduation ceremony on Friday, May 11. The celebration is scheduled for 10 a.m. at Memorial Auditorium at the Duke Energy Center for the Performing Arts in downtown Raleigh.

“Deputy Attorney General Rosenstein is a dedicated public servant, and we are delighted that a lawyer of his prominence can join us for this commencement,” said Campbell Law Dean J. Rich Leonard.

In 1997, Rosenstein became an Assistant U.S. Attorney in Maryland. He prosecuted cases in the U.S. District Court and briefed and argued appeals in the U.S. Court of Appeals for the Fourth Circuit. He also coordinated the credit card fraud and international assistance programs.

From 2001 to 2005, Rosenstein served as Principal Deputy Assistant Attorney General for the Tax Division of the U.S. Department of Justice. He supervised the Division’s criminal sections and coordinated the tax enforcement activities of the Tax Division, the U.S. Attorney’s Offices and the Internal Revenue Service. He also oversaw civil litigation and served as the acting head of the Tax Division when the Assistant Attorney General was unavailable, and he personally briefed and argued federal civil appeals.

Rosenstein served as the United States Attorney for the District of Maryland from 2005 to 2017. He oversaw federal criminal and civil litigation and developed and implemented federal law enforcement strategies in Maryland. During his tenure as U.S. Attorney, Rosenstein served on the Washington/Baltimore High-Intensity Drug Trafficking Area Task Force and on the Attorney General’s Advisory Committee. He also personally litigated cases in the U.S. District Court and in the U.S. Court of Appeals for the Fourth Circuit.