In the early 1900s, Buies Creek Academy founder J.A. Campbell recruited Bernard F. McLeod Sr. and his family to move to the small, rural community to work and provide food and support for the school’s students, faculty and staff. Part of the “deal” was an education for Bernard and his future children.

Over a century later, the McLeod name is now synonymous with recruitment at Campbell University. On Friday, the University celebrated the start of construction on the Bernard F. McLeod Sr. Admissions & Financial Aid Center with generations of the McLeod family — including Bernard Jr., a 1948 Campbell College graduate — on hand. 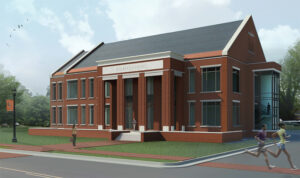 “The McLeod family’s service to Campbell has been exceptional and will be remembered for years to come,” said Thomas J. Keith, chairman of the Board of Trustees whose family has also supported Campbell for generations (Keith Hills bears his family’s name).

“This building will be an iconic structure and a one-stop shop for the enrollment process at Campbell,” Keith added. “It will be the first impression for most students here and a wonderful one, to be sure.”

Construction on the new center is set to begin Sept. 18, and the building is expected to be ready for use by the fall 2018 semester. It will be located in Campbell’s Academic Circle, between Butler Chapel and the future spot for the 100,000-plus square-foot student union (where Baldwin and Kitchin Halls currently stand).

The building will be home to the admissions office on the first floor, and the second floor will house financial aid and the business office. Currently, those three offices are separated into two buildings on campus. Meeting rooms and interview rooms in the center will look out over the Academic Circle, facing Campbell’s iconic Kivett Hall and D. Rich Buildings. There will also be a two-story “fireplace room,” providing a comfortable waiting area for prospective students and their families.

Speakers on Friday stood under a tent where the center’s visitor parking lot will soon sit. Behind them, the grass was marked in orange and white outlines showing where offices and waiting rooms on the first floor would sit. Admissions employees posed for photos in their future offices after the ceremony.

“The Campbell experience, it all begins with admissions,” said Assistant Vice President for Admissions Jason Hall. “When interviewing potential members of our team, I tell them we’re continually selling Campbell, and the most important part of the student experience begins in our office. It’s the first impression. The atmosphere of hospitality and love for the University sets the tone for their visit.”

Bernard F. McLeod Sr. was born in 1885 and moved to Buies Creek in the early 1900s at the request of his friend J.A. Campbell. The McLeod’s home once stood where the John W. Pope Convocation Center now stands.

After completing his studies at Buies Creek Academy, Bernard McLeod graduated from Wake Forest University in 1913 and returned to Buies Creek to teach. He soon married Lacey Ann yearby, whose family also moved to Buies Creek a decade earlier to send their children to the academy. McLeod earned his law degree from Wake Forest and opened a law office in Coats in the early 1920s. He joined the Campbell Junior College Board of Trustees in 1926, the same year Bernard Jr. was born.

Bernard Sr. introduced J.A. Campbell’s son, Leslie Campbell, to the student body as the school’s new president in 1934. Bernard Jr. graduated from Campbell College in 1948 and also went on to serve on the University Board of Trustees.

Campbell’s fifth president, J. Bradley Creed, spoke to the family’s dedication to the school at Friday’s ceremony. He said while there are some in communities like Buies Creek who fight change, the McLeod family has always stood for and supported change and progress at Campbell.

“There are those who know the only thing you can count on in life is change,” Creed said with Bernard McLeod Jr. and his family in the audience. “That’s the only thing that is stable. But that change has to be in continuity and building upon the values, the commitments and the integrity of the past. Bernard F. McLeod Jr. believes in … continuing the cycle of renewal and movement into the future while recapitulating the best of the past.

“That’s what makes this place different. That’s what is special about Campbell University.”