“It is doubtful that any other single event so influenced the spirit and character of the school as did the fire of 1900. Like the legendary phoenix bird that every 500 years arose from its flame and ashes to a new and vigorous life, so came resurrection to Buies Creek Academy.”
— J. Winston Pearce, “Big Miracle at Little Buies Creek”

The fire that destroyed the campus of Buies Creek Academy on Dec. 20, 1900, not only wiped out all but one of the wooden buildings at the small, rural school, but also the records — including maps, deeds and other historical documents that encapsulated the young academy’s 13-year history. Coincidentally, Harnett County’s courthouse also succumbed to a fire that same year, also wiping out documents from the school founded by J.A. Campbell’s early years.

Over a century later, the only thing certain about the site of the original Buies Creek Academy was that it was somewhere on the campus of what is now Campbell University. In 1903, architect Z.T. Kivett built a sturdy, monumental brick building (Kivett Hall) to help resurrect the school, making the original building — with its white wooden boards and church-like steeple above the entrance — but a memory. 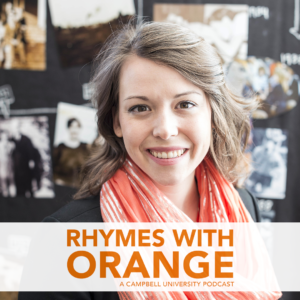 The mystery behind the exact location of that building became more than just a curiosity to history buff Kendra Granger (’06), the Global Engagement coordinator at Campbell, and Sal Mercogliano, associate professor of history. It became a challenge. After months of digging through the Campbell archives and poring through minute details of every photo that remained from that era, the two struck gold in the form of two specific photos — along with a few journal entries and 19th Century soil maps.

Click the photo to download the Rhymes With Orange podcast featuring Granger and Mercogliano, talking about their research.

Their findings were celebrated on Feb. 8 — just steps away from the northeast corner of Kivett Hall — in a marker dedication ceremony revealing the site of the original Buies Creek Academy.

Current President J. Bradley Creed, former President and current Chancellor Jerry Wallace, Divinity student Christopher West and Vice President of Business and Treasurer Jim Roberts shared the story of the fire and Campbell’s motto, ad astra per aspera (to the stars, through difficulties), before a crowd of more than 100 faculty, staff, alumni and students at the Founders Week event.

“I don’t think J.A. Campbell was a superstitious man, but it was 13 years after they started the Academy, and on that fateful night in 1900, his dreams went up in smoke,” Creed said from the podium on a chilly, though sunny, morning. “At dawn, nothing remained of the dream but smoldering ashes. This young 26-year-old teacher was now a 39-year-old man who felt like a dead man. But of the ashes came a new school with new students, new programs and new opportunities. The orange flames of the ferocious fire lashing against the black night sky were a painful memory, but they are now the colors that we all wear proudly. And we’re reminded again that we head to the stars, but always on the path of difficulty.”

The ceremony fell in line with the theme of this year’s Founders Week — foundations. Students who attended the dedication came away with a black-and-white Buies Creek Academy T-shirt, and the men’s basketball game the following Saturday was to include an “Ultimate Buies Creek Academy Fan” Gaylord bobblehead keepsake for fans, with the camel mascot wearing a black letterman’s sweater and haircut from the era while holding a BCA pennant.

“Every year, we try to use Founders Week as an opportunity to highlight some theme or aspect of Campbell’s history,” Granger said. “Last year, Sal and I entertained the idea of discovering the location of the Buies Creek Academy building — thinking that’d be a grand reveal toward the end of the week. In our first Founders Week (2015), we unveiled the J.A. Campbell statue, and we were hoping for some kind of big historic reveal like that.”

Easier said than done. According to Mercogliano, the fire(s) from 1900 did away with most maps and deeds from that era. What the duo did have, however, was access to several photos from the 1890s through the early 1900s, and the Buies Creek Academy catalogues from those years — each containing photos of the early building and class photos in front of it. Granger and Mercogliano knew from the records and journals kept off campus by Dr. Campbell and other early administration that one building — located about 30 feet from the main building — did survive the blaze. It was a small classroom-sized building where the band played. And each year, members of the band — usually about six to 12 students holding an instrument — would line up in front of that building for a class photo.

While those photos were important to show the size of that building, they did little to document where exactly that building stood. Until 1905, that is. 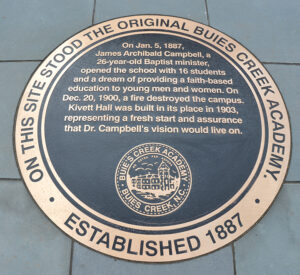 In 1905, the band positioned itself in a different location, still with the music building behind them, but this time also with a corner of Kivett Hall on the far right of the photo. Kivett Hall was built two years before this photo, and Granger believes the band wanted a photo that kept the traditional music building in the background, but also showed a bit of the “new.” One-hundred and thirteen years later, that photo would become the “smoking gun” to determine the location of the rest of the campus that burned to the ground.

“Those old catalogues described in detail how the old building looked,” Mercogliano said. “An important note was that the music building was built on the east wing. That gave us direction. The 1893 catalogue read: ‘The music room was built in the grove nearby, yet far enough away to prevent from interfering with its studies.’”

Straight-on photos of the old campus often left the music building out, but a side-angle shot published in the 1898 catalogue showed the music building to the right. When Mercogliano and Granger came across that 1905 band picture — found in a shoe-box-sized box in the well-preserved archive room in Carrie Rich Hall — they knew that was the image they needed.

“That changed it,” Mercogliano said. “We had a picture with the old building and with the new. The only problem was, we needed to figure out which corner of Kivett that was.”

Mercogliano and his son spent an afternoon studying the photo compared to Kivett’s corners (two of the previous corners were erased when the building that now houses Wiggins Memorial Library was built). The corner in the photo lacked windows, so that narrowed things down. Mercogliano had a good feeling the corner matched the current northeast corner of Kivett Hall (the side facing Pearson Hall, built in 1915). He studied the brick layout of that corner compared to the photo to confirm a match.

“We measured the bricks, and we saw that the bricks on this side were laid out in a very specific pattern,” he said. “For seven rows, the bricks are outward facing, then on the next row, they’re flipped on their side. Then another seven rows, then that odd row again. This is the only corner of the building that has that.”

The photo confirmed that the music building would have been located where the current administration building — the J.A. Campbell Building — sits today. The band would have performed roughly where President J. Bradley Creed’s office now stands.

As for the old Buies Creek Academy, it would have stood where Kivett Hall stands today, the far west side of the building ending roughly where Kivett’s front door is. It makes sense, Mercogliano and Granger said, that Kivett would have been built on the spot of the old campus, at least symbolically. But there was never any documented proof that that was the case. Until now. 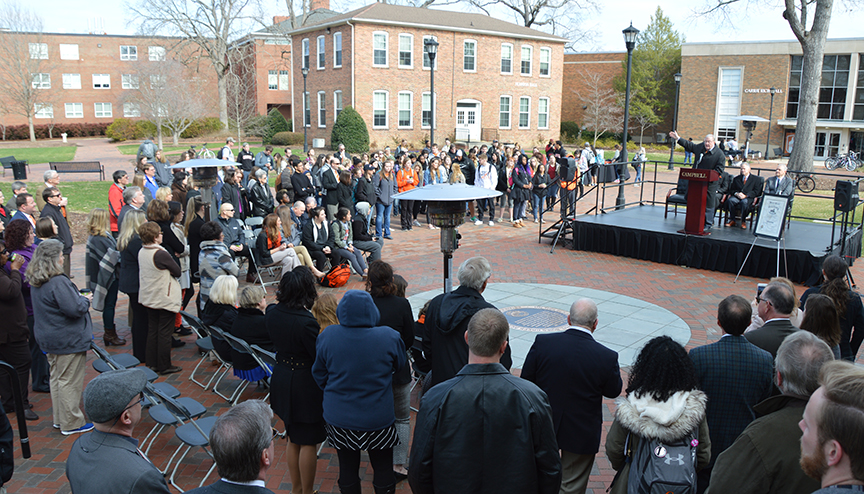