Earlier this semester Rebecca Cain, a junior English major at Campbell University, needed a gift for her friend’s birthday. Instead of buying her friend something anyone else could have gotten, she decided to make a gift. So she went to the Wiggins Memorial Library on Campbell’s main campus.

Using the program Tinkercad, a Makerbot 3D printer, and some art supplies, she designed, printed, and painted a figurine of her friend’s favorite character from a popular TV show. All of this was done in the Idea Lab/Makerspace on the library’s third floor. “It’s a really cool place to be in,” she says.

With an array of resources available, the Idea Lab/Makerspace allows her and other students to make what they want, how they want. Cain has made many other figurines for herself and friends and even designed her own coffee mug. Other students have made miniature furniture, iPhone cases, and camels.

“I like conceptualizing [what to make] and doing it,” Cain says. The Idea Lab/Makerspace gives her and other Campbell students, she adds, the opportunity to turn their ideas into tangible products.

What is the Idea Lab/Makerspace

This follows a larger trend in the United States: the Maker Movement. Characterized by independent innovation and a Do-It-Yourself attitude, the Maker Movement encourages individuals to create their own products. The Idea Lab/Makerspace gives Campbell students, faculty, and staff the tools and means to join the movement.

“The purpose of the Idea Lab/Makerspace is to foster creativity, tinkering, and inventing with our students and faculty so when they think about a design or a project, they can come here and actually create it,” says LaKeshia Darden, the curriculum/media librarian who oversees the Idea Lab/Makerspace. “Here they can translate design concepts into real products.”

Like the Maker Movement, Campbelll’s Idea Lab/Makerspace is quite new. For several years there has been space in Wiggins Memorial Library that includes a book binder, Legos, circuit boards, high-end art supplies, software like Final Cut Pro, and a button maker.

Last fall the library added a specialized printer that can print posters up to 24-inches wide and 48-inches long, as well as its first — and the university’s first — 3D printer. The Makerbot Replicator 5th Generation prints physical objects from a digital model. The 3D printer’s arrival coincided with an extension to the Idea Lab name, giving Campbell the Idea Lab/Makerspace.

A second, more advanced 3D printer was added this fall that can print in different materials, including metal, rubber, and wood. It was a gift from an anonymous donor who wanted to expand hands-on learning opportunities for students and encourage entrepreneurial spirit.

The space “is synonymous with innovation and entrepreneurship,” says Campbell University Library Dean Borree Kwok. “It is open to everyone in the Campbell community to explore and experiment with new technologies, to come and share their creative ideas, and to bring their imagination to fruition through tinkering and making.”

How the Idea Lab/Makerspace enhances learning

The concept of libraries being a communal place where ideas are shared and realized is not new. The Idea Lab/Makerspace, however, expands the ways in which students and faculty can learn and solve problems through creation.

There, students can test their own ideas, experiment, make mistakes and correct them, recreate concepts they’ve learned in the classroom, and gain hands-on experience. “Learning occurs on a different level when you’re trying to make designs real,” Darden says.

That is echoed by Dr. Jenna P. Carpenter, founding dean of the School of Engineering. “It’s one thing to see a picture in a book and read it, but if I can recreate that in my hand or if I can program it, then I can understand it on a much deeper level,” Carpenter says. “It’s one thing to study a concept, and it’s another thing to use it.”

By the time it enrolls its first students in fall 2016, Campbell Engineering will have its own “tinkerspace” full of technology, equipment, and tools like robotics, circuit boards, machine-type equipment, wood-working tools, and several 3D printers that will vary in size and in the materials and number of colors they can print.

The school’s curriculum will also be filled with assignments and projects that will require students to spend time tinkering and creating in a Makerspace. In their freshman year alone, Carpenter says, engineering students will have to complete no fewer than seven hands-on team projects, including those that will depend on the use of 3D printers.

“3D printing is a great way to come up with some custom design parts for prototypes,” says Carpenter, adding that it is inside these Makerspaces where students can develop products that catch the eye of employers.

Where the Idea Lab/Makerspace is going

Darden imagines a day when there are satellite Idea Labs/Makerspaces all over campus.

“The dream is that each school would adopt the Makerspace spirit and customize it to meet the needs of their disciplines,” Darden says.

Kwok adds she hopes these Makerspaces will be places for interdisciplinary learning, where students and faculty from different fields come together to create products and solve problems. “As faculty and students from different disciplines come together to utilize the space, it fosters an environment where multidisciplinary learning and thinking can happen,” Kwok says.

That is welcome news to Michael B. Wells, dean of the College of Arts & Sciences. “The Makerspace will excite students that enjoy working their hands, much like our science laboratories and art studios.”

And to students like Rebecca Cain. “I much prefer making things,” she says. — By Noah Merkousko

How to use a 3D printer

Not sure where to start with using one of the 3D printers in the Idea Lab/Makerspace? It is easier than it sounds. Follow these four simple steps to create an original design:

To recreate a pre-existing design, say of a camel or of Kivett, then follow these two simple steps: 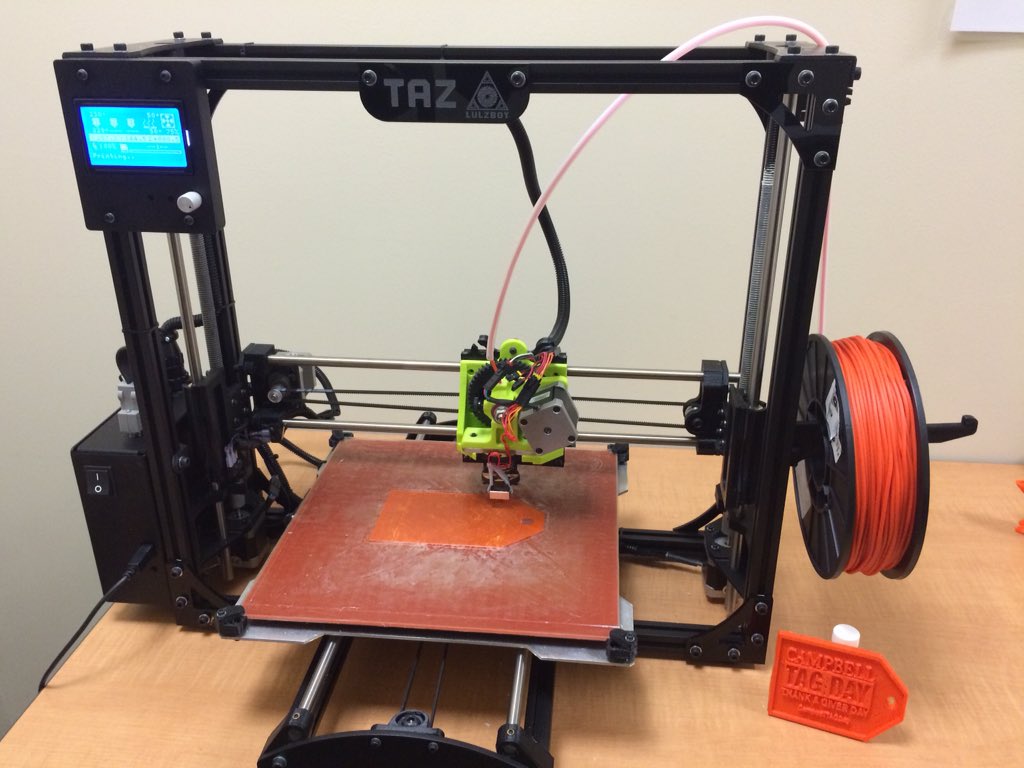