Photo: Pat and Bob Barker (‘65) gave $500,000 to the Fund for Campbell and asked alumni and friends to join them and help match their gift for Campbell Giving Day.

For the fourth consecutive year the Campbell University office of annual giving has successfully topped its fundraising goal for the annual Campbell Giving Day.

Held on Feb. 3 as part of the university’s annual Founders Week, nearly 1,800 donors contributed more than $1.5 million on Campbell Giving Day to the Fund for Campbell, student scholarships, every Campbell school and college, all 21 athletic teams, and many other initiatives.

The College of Pharmacy & Health Sciences brought in over $100,000 in gifts and the Lundy-Fetterman School of Business over $75,000. Among Campbell’s athletic teams, wrestling received over $100,000 in commitments, while softball and volleyball took in about $10,000 each. The Fund for Campbell, which supports the university’s greatest needs and opportunities, received over $600,000 in support, and a new naming gift for the football locker room renovation pushed totals for the day to record levels. 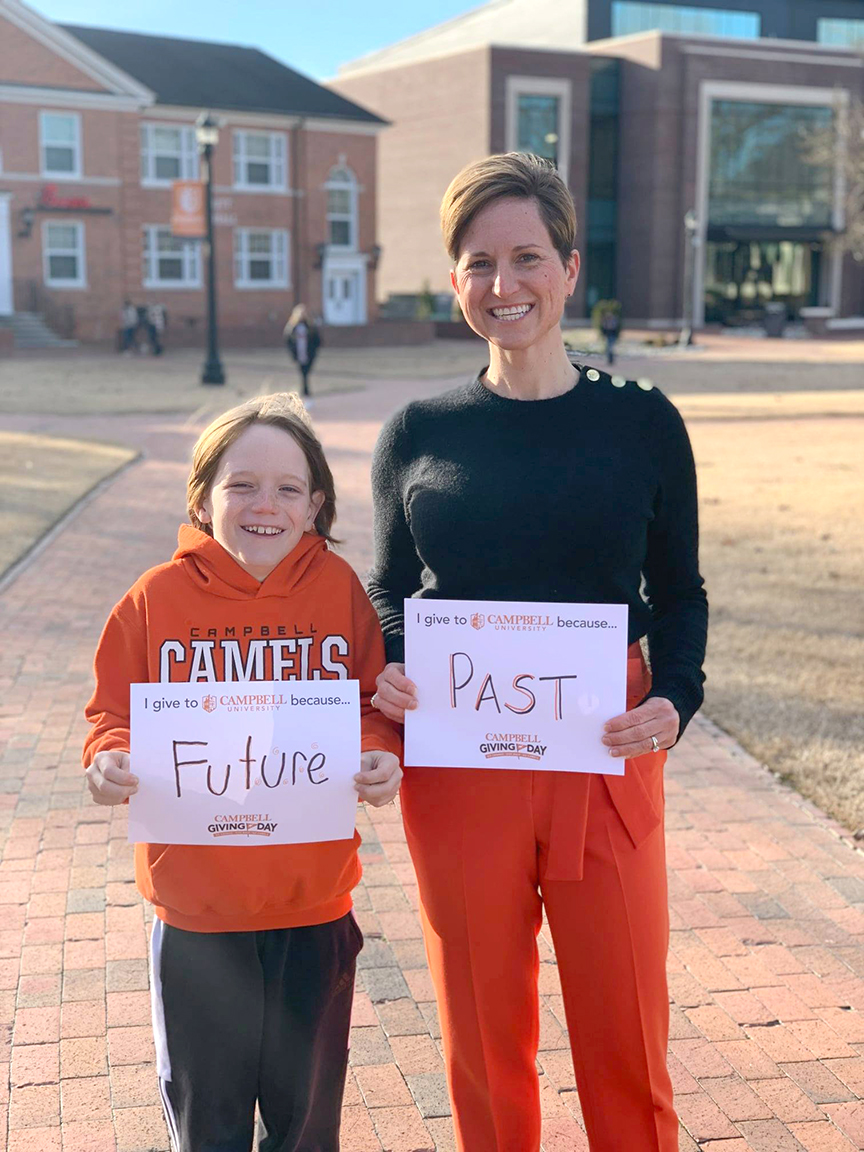 Launched in 2018, Campbell Giving Day is a day-long campaign where Campbell alumni, students, faculty, staff, parents, families and friends are encouraged to “Go Orange. Give Back. Go Camels.”

This year’s goal was to generate 1,887 gifts—in honor of Campbell’s founding year—to be given in the 24-hour time frame. A “To the Stars” $1 million challenge was also issued by Bob (’65) and Pat Barker, who generously gave $500,000 to the Fund for Campbell. The Barkers challenged the Campbell community to match their gift on Campbell Giving Day.

“I could not be more proud of the Campbell family for stepping up and meeting the $1 million ‘To the Stars’ challenge as part of Campbell Giving Day,” said Bob Barker, member of the Campbell Board of Trustees. “Pat and I were honored to sponsor this challenge and participate in a day where everyone associated with Campbell can participate. It’s not about how much you can give, it’s about participating and being involved.”

Campbell Giving Day also provides an annual boost to the Campbell Leads Campaign that launched in 2016. In November 2020, Campbell announced a stretch goal of $100 million for the campaign. The five-year campaign exceeded its original goal of $75 million in just four years.

“Results of this year’s Campbell Giving Day were exceptional, just incredible and exceeded my expectations,” said Britt Davis, vice president for advancement. “I was confident we’d reach our $1 million goal, but to stretch it all the way to $1.5 million because of the generosity of Campbell alumni, friends, employees, parents, and even students was astounding. Despite the challenges that we are all facing in this changing world, the loyalty of Campbell alumni and friends remains strong and steadfast.”

In addition to making a philanthropic gift, alumni and friends were encouraged to show their Campbell pride by wearing orange and sharing why they give on social media. #CampbellGivingDay appeared thousands of times on Instagram, Facebook, Twitter, and LinkedIn.

“What I love about Campbell Giving Day is that Campbell alumni, employees, and other friends make a strong statement about their commitment to the mission and students of Campbell University,” said Tammi Fries (’04), director of annual giving. “I believe our alumni and others understand the importance of giving back. We can ask these Campbell friends to join us to invest in our university and our students. Their response each year is just one reason why I am so grateful to be a part of the Campbell community.” 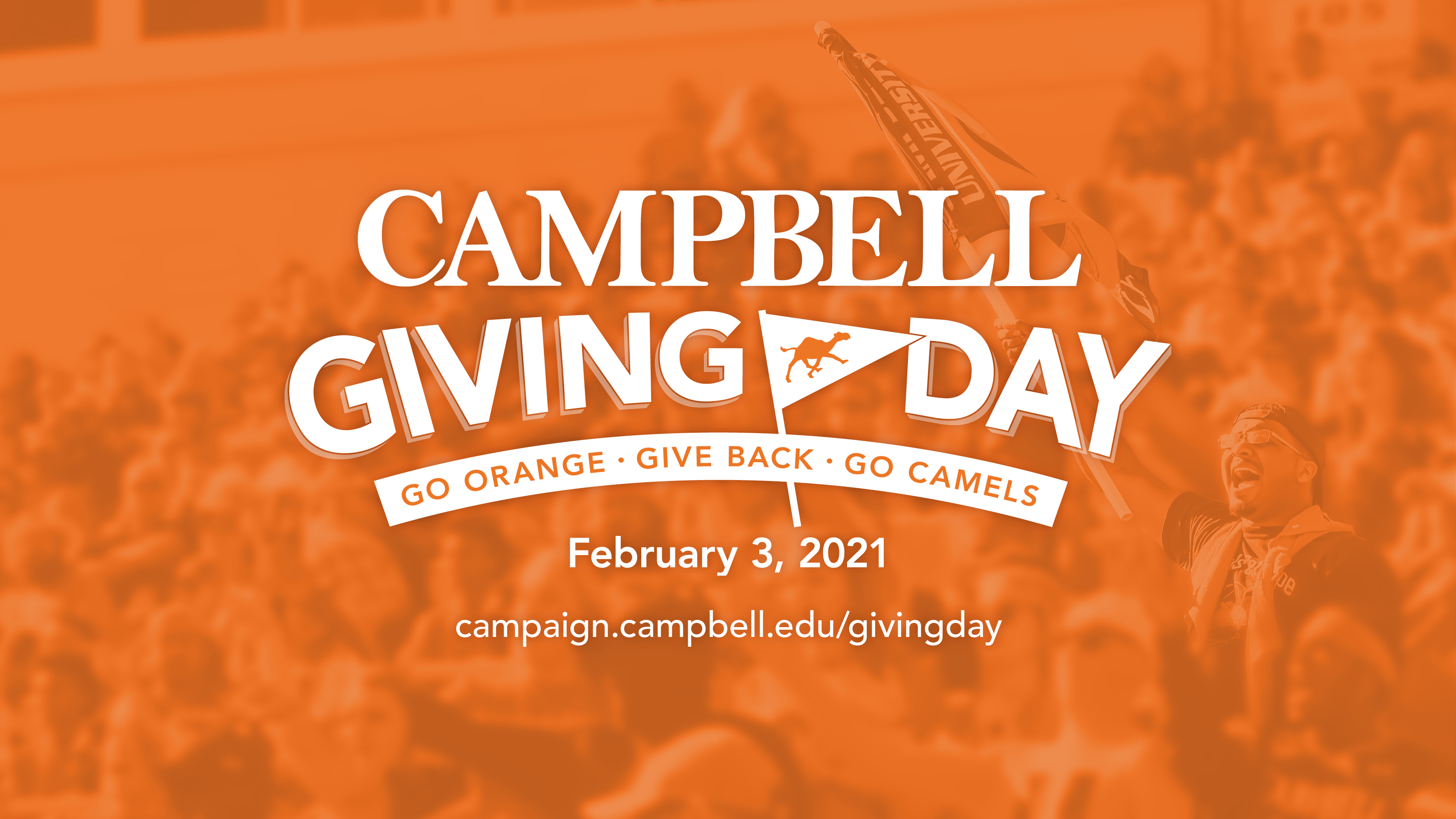