Aimed at helping the community better understand laws that empower disabled people, the project may be unique in the nation

Created in 2015, the Service Animal Project seeks to increase access to facilities, services, and opportunities for persons with disabilities by educating the public on the crucial role of service animals and the laws which protect service animal handlers. In coordination with Disability Rights North Carolina, the project provides this education largely through community trainings for local businesses and organizations, including elementary school classrooms, the N.C. General Assembly and, significantly, restaurants, including A Place at the Table.

Most law schools, including Campbell Law, have a Student Animal Legal Defense Fund (SALDF) that is dedicated to providing a forum for education, advocacy, and scholarship aimed at protecting the lives and advancing the interests of animals through the legal system and raising the profile of the field of animal law.

“For many individuals with disabilities, a service animal is key to maintaining independence and participating fully in society,” says Cody Davis ’18, the current Wallace Public Service Fellow who helped start the Service Animal Project when he was a student. Davis is blind and is rarely without his service animal, Clark, who is a tan Labrador.  “While it’s true that federal, state, and local laws protect the rights of persons with disabilities who use service animals for this very reason, these laws can be confusing and sometimes abused to the detriment of people with disabilities. The Service Animal Project aims to end that confusion.” 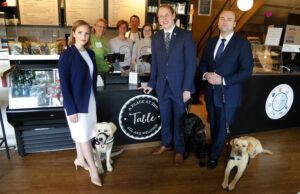 Adds Derek Dittmar, a third-year law student and current leader of the Service Animal Project, “As anybody with a service animal can tell you, being refused service, or treated differently because of your service animal is a truly devastating and dehumanizing experience.”

“One of the highlights of my law school career has been serving with the Service Animal Project, culminating in my coordination of the project this year. I am so thankful for our project members, pro bono leaders on campus, faculty and staff support, and everybody else who is continuing to ensure that everyone in North Carolina understands the rights and responsibilities associated with service animal use. I’m also incredibly thankful to my best friend, and guide dog, Howard, who continues to open up a world of possibilities every day. This one’s for you, buddy.”

The program has also made a significant difference in the life of Elizabeth “Brooks” Barrett, the student director of the 2018-19 Campbell Law Pro Bono Council. She is currently training  5-month-old Bailey, a Golden Retriever, to be her service animal.

“I learned a great deal about what service animals are, how they make a huge difference in the lives of their handlers, and why it is important to protect the rights of service animal teams,” Barrett says. “It was this personal edification and involvement that influenced my decision to obtain a service animal for my medical needs. I did not make this decision lightly, and it has been a long process spanning over a year for me to receive my service animal-in-training, Bailey. She has already improved my life in ways that I could not have ever imagined.”

Since its founding in 1976, Campbell Law has developed lawyers who possess moral conviction, social compassion, and professional competence, and who view the law as a calling to serve others. Among its accolades, the school has been recognized by the American Bar Association (ABA) as having the nation’s top Professionalism Program and by the American Academy of Trial Lawyers for having the nation’s best Trial Advocacy Program. Campbell Law boasts more than 4,200 alumni, who make their home in nearly all 50 states and beyond. Throughout 2019, Campbell Law is celebrating 40 years of graduating legal leaders and 10 years of being located in a state-of-the-art facility in the heart of North Carolina’s Capital City.